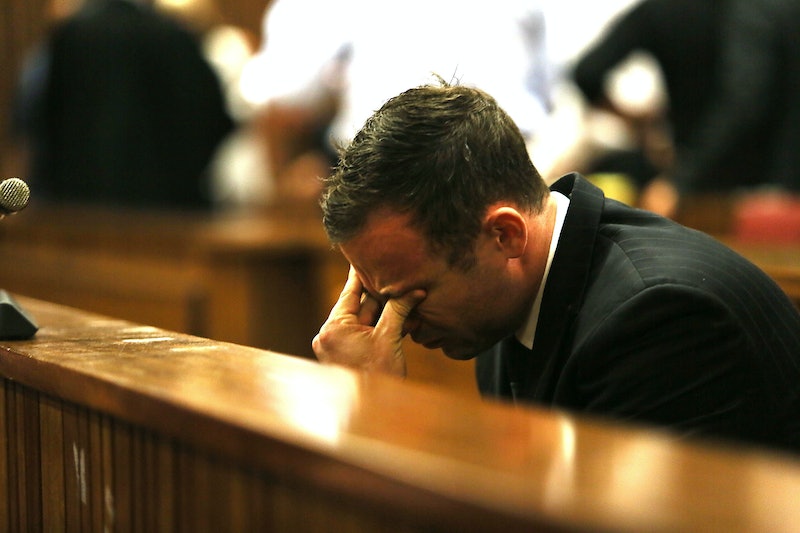 It's been months of tears, vomit, screams and apprehension — but today, it's finally over. On Friday, Oscar Pistorius was found guilty of culpable homicide, a charge equivalent to manslaughter in the U.S. But what happens next isn't so clear-cut: Though the crime carries a maximum 15-year prison sentence, it's actually up to Judge Masipa to decide how much time the runner spends behind bars. In fact, she could even choose to give the Olympian a suspended sentence, potentially meaning Pistorius would spend no jail time at all.

On Thursday, Judge Masipa found Pistorius not guilty of murder (premeditated or otherwise), effectively ruling that the Olympian had no intention of killing his girlfriend, Reeva Steenkamp, on that fateful Valentine's Day last year. The decision saved the runner from a lifetime in prison. But after a day's adjournment, the judge found Pistorius guilty of culpable homicide — meaning that, even though he didn't intend to kill her, he'd been negligent.

Said Judge Masipa, according to the BBC:

The accused had reasonable time to reflect, to think and conduct himself reasonably.The accused knew that there was a person behind the door, he chose to use a firearm which was a lethal weapon, was competent in the use of firearms as he had received training.

The only thing that might have saved the athlete from a culpable homicide charge was if the judge had taken into account his background (i.e. his disability and paranoia). In this case, she would have agreed that Pistorius was in the wrong, but that he really did believe that he was acting in self-defense. In the end, Judge Masipa found this argument unconvincing. Said she:

Vulnerability is not unique - There are many people in this country without any form of security at all ... The accused acted too hastily and used excessive force. It is clear that his conduct was negligent.

Sentencing for a culpable homicide charge is completely up to the judge, the only limit being a maximum 15 years in jail. It's still not clear what options Judge Masipa is considering, but even if she completely suspends the sentence, Pistorius was also found guilty of a lesser charge: firing a gun in a public space (the firearm had been discharged at a restaurant in early 2013). This usually carries with it a five year prison sentence, which could come on top of whatever the first sentencing turns out to be. Fortunately for the athlete, he was acquitted of two other firearm charges, one of which would have carried a heavy 15 year prison sentence.

According to the AP, when he heard the verdict, the athlete was — for once — unemotional. He's now gone to his uncle's house, and will stay out on bail until the sentencing next month. That's when his future will really be decided.