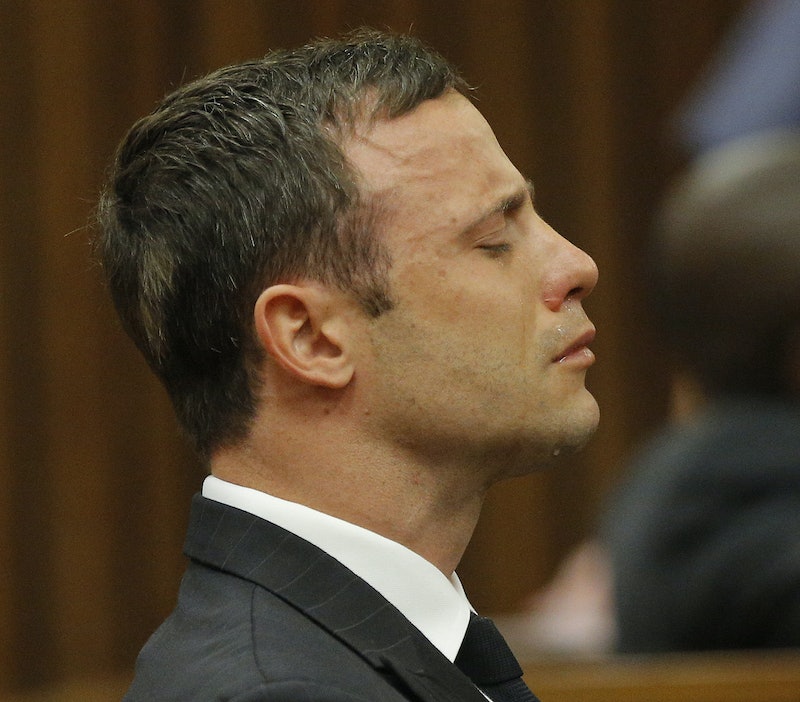 It's a big day for the embattled Olympic runner: Oscar Pistorius has been found not guilty of murder and premeditated murder, meaning the worst possible verdicts have now been ruled out. That's not to say that the harrowing trial is over; the South African judge still hasn't issued a final verdict. But one thing has been made clear: Pistorius won't be spending his life in jail.

On Thursday, after months of emotional outbursts and varying defense strategies, Pistorius was cleared of premeditated murder charges. What does this mean? In short, Judge Masipa found that there wasn't enough evidence to support the idea that Pistorius intentionally killed his girlfriend Reeva Steenkamp (or whoever he believed to be behind the bathroom door). Premeditated murder would have meant life in prison, with at least 25 years in jail before Pistorius would have even been eligible for parole.

Judge Masipa went a step further, though, clearing the once-celebrated runner of non-premeditated murder as well. Which means that she found that he did not intend to kill Steenkamp, even in the heat of the moment — as the judge pointed out, Pistorius might not have known that his shots would be fatal, even if he should have done. If he'd been found guilty of this charge, the judge would have been able to choose his sentencing, and life imprisonment would have still been a possibility.

Just because the judge rejected these two charges, though, does not mean it's all over. As Masipa said, according to CNN: "This is not the end of the matter." Here are the other possible verdicts that could still come through:

In this case — which looks the most likely as of now — the judge would find that, though Pistorius didn't intend to kill Steenkamp (or whoever he believed was in the bathroom), he didn't behave as a reasonable person should (like, checking who was behind the door before firing) and so was negligent. The sentencing here would be up to Judge Masipa: the maximum time Pistorius could spend in jail is 15 years, but there are other options the judge could choose, like a suspended sentence — meaning a sentence that Pistorius wouldn't be required to serve.

In addition to the murder charges, Pistorius is also up against three other charges: two of them are about firing firearms in public (once in a restaurant, and once from his car), and the third is to do with his possessing ammunition illegally (he had bullets in a safe in his bedroom). Although these charges sound like less of a big deal, the third is actually almost as bad as the manslaughter possibility. If he's found guilty of illegal possession of ammunition, he could spend a maximum of fifteen years in prison. The other two could mean up to five years in jail.

Obviously, this would be the best case scenario for the Olympian. Here, the judge might take into account his background (for example, the fact that he was brought up terrified of crime) and would find that, yes, Pistorius acted wrongly — but that he really did believe that he was acting in self-defense. If Judge Masipa goes for this verdict, Pistorius would be a free man.

More like this
The True Story Of Candy Montgomery From Hulu’s True Crime Series
By Radhika Menon
Where Is Dr. Cline Now?
By Morgan Leigh Davies
How To Fight For Reproductive Rights, Based On How Much Time You Have
By Courtney Young
9 Honestly Unbelievable Revelations From The WAGatha Christie Trial
By Frances Stewart
Get Even More From Bustle — Sign Up For The Newsletter