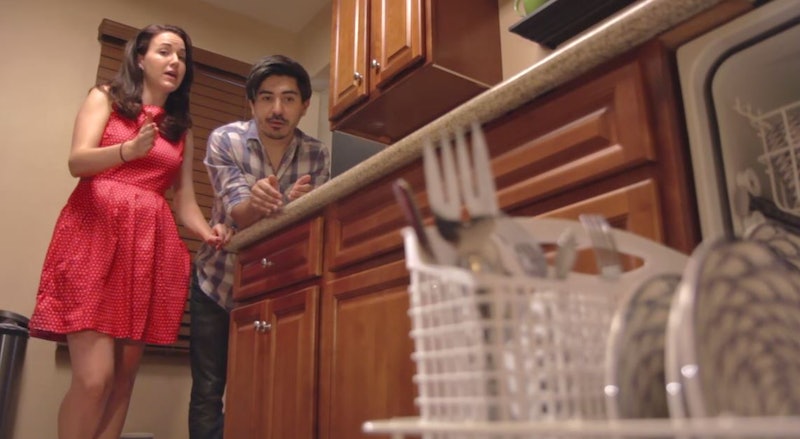 We’ve already talked about all the weird things couples do (and ‘fessed up to the ones we’re guilty of) — so let’s up the ante a little bit: BuzzFeed’s latest entry in their “Weird Things of Coupledom” video series addresses the weird things all couples fight about. Put up your dukes and get ready to rumble, everyone.

And we’re not talking about major fights — or perhaps more accurately, fights about major life choice. We’re talking about the little things: How you fold the towels. How loudly you chew. Whether one changes the toilet paper roll after you finish it, or before you use it next — and whether it goes over or under. Where you squeeze the toothpaste tube from. Which direction the flatware goes in the dishwasher. And all those seemingly tiny things that, for some reason, make our blood boil more than anything else. Not going to lie: I’m guilty of squeezing the toothpaste tube from wherever I happen to find it. It drives my SO nuts, but then again, we each have our own tube, so look at that! Problem solved!

Of course, even with all this micromanaging insanity, at least we can always acknowledge at the end of the day that it’s a dumb fight, anyway. Just, y’know… don’t do it again. Here, take a watch — how many of these arguments have you and your boo had?

Interestingly, though, two of the issues contained within this video are actually “serious” (a word I use with an incredibly large grain of salt) enough to have warranted scientific study: Netflix cheating, and the over-or-under question. Harris Interactive conducted a study in 2013 gauging people’s Netflix cheating habits — and it turns out that 66 percent of partners do it. Not only that, but it happens in some pretty bizarre circumstances: 21 percent do it in bed while their partner is a asleep, 10 percent doing it while traveling for work, seven percent do it in the other room while their partner is home, and five percent even hole up in the bathroom and do it there. Why do we feel so betrayed when it happens? We might need some more research to figure that one out, but I think it has something to do with the Netflix cheater turning what the other partner viewed as a “couples” activity into a solitary one. Feels bad, man.

And as for toilet paper rolls? Well, here’s an infographic from CNET that breaks down the argument into the pros and cons of each position. Also, did you know that there’s an entire Wikipedia page devoted to toilet paper orientation? True story.