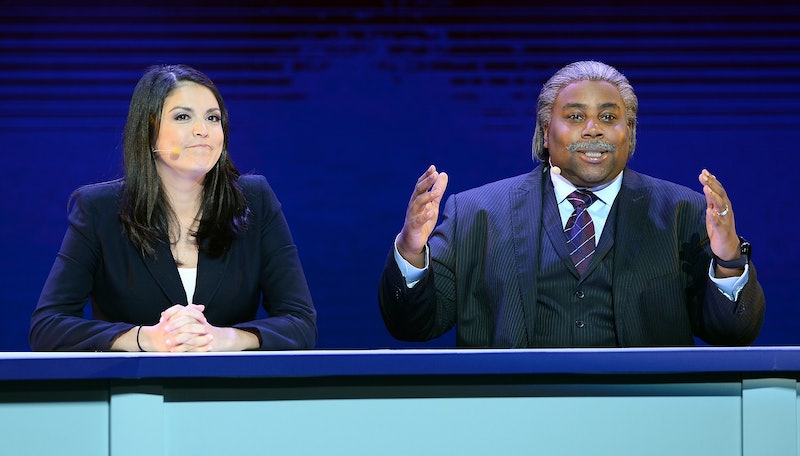 It was announced yesterday that comedian Michael Che would replace Cecily Strong at the Weekend Update desk on Saturday Night Live. Che, who worked in the SNL writers' room alongside Weekend Update co-anchor Colin Jost last season, is incredibly accomplished in the New York comedy circle. Most recently, he joined The Daily Show as a correspondent, gaining attention and praise for some of the show's most poignant bits. Che's hiring is great news for the SNL roster not only because he's brilliant, but also because it's a much needed move for diversifying the cast. The variety show continues to face scrutiny for its lack of diversity — both from audiences and from cast members. Che will be the show's first black Weekend Update anchor. But while I'm excited to see what Che brings to the Weekend Update desk, I'm incredibly upset to see Strong go.

Strong, who took her seat at the mock news desk at the end of Seth Meyers' tenure on SNL, will remain on the show as a cast member. Executive producer Lorne Michaels explained the casting switch to the New York Times as a result of the segment "[struggling] to find an identity last season." And, the Times explained that Michaels suggested it's due to "Strong [having] to adjust twice to different co-anchors" in a short period of time.

But, here's the thing: that's not Strong's fault. Michaels put Strong at the Weekend Update desk knowing that Meyers would leave SNL to succeed Jimmy Fallon on Late Night. He then put Jost at the desk, putting the pressure on Strong to change a dynamic she had just fostered with her previous colleague. Luckily, she is great at her job, and Strong's short time on the Weekend Update desk was memorable. Since Meyers' exit, Strong has delivered some of the best faux news on the segment. While Jost is a skilled comedy writer — he's only 32 and already co-head writer of, arguably, the most important comedy show on television — he's somewhat awkward on screen. Granted, he's new to the desk, and the adjustment from writers' room to center stage is not always smooth.

Head writers have manned the Weekend Update ship in recent history — Meyers and Tina Fey both held the position. Jost is a great writer, but Strong is a great performer. Michaels' argument for ousting Strong and keeping Jost is not too convincing. I'm sad we won't be able to see her alongside Che, but I hope they'll share some screen time if Girl You Wish You Hadn't Started a Conversation With at a Party starts making the late night rounds again.

Not convinced that Strong should've stayed on as Weekend Update co-anchor? Here's some proof to make you reconsider.