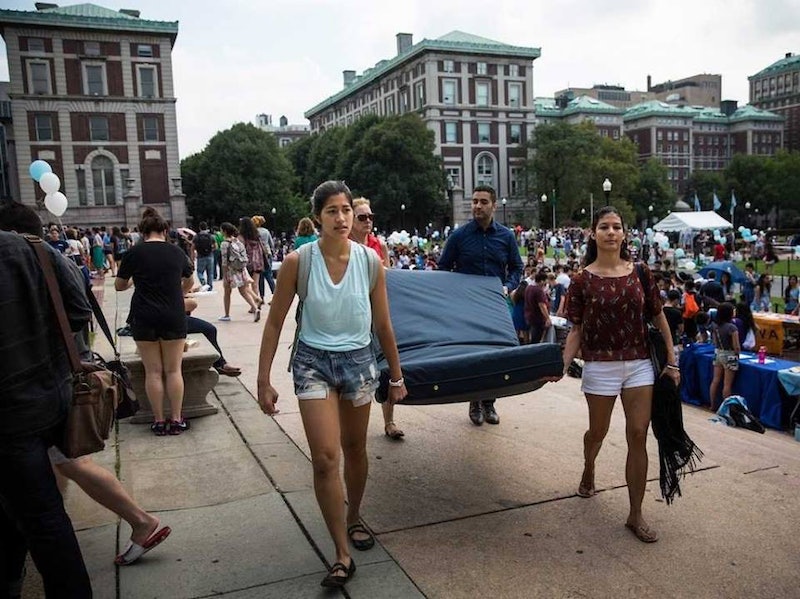 Carry That Weight Together International/Facebook
By Lucia Peters
Sep. 12, 2014

When Columbia University senior Emma Sulkowicz first began her “Mattress Performance/Carry That Weight” project, one of the rules she made for herself was that she couldn’t ask for help. If it was offered, however, she could accept — and current students and alumni alike have banded together to help her carry her mattress for as long as she needs it. In the ongoing battle against campus rape culture, this heart-lifting display of support makes a powerful statement even stronger.

Begun by Allie Rickard, a senior majoring in art history and visual arts at Columbia’s women’s affiliate, Barnard College (which also happens to be my alma mater), Carrying the Weight Together seeks to help Sulkowicz carry her mattress every day. The movement, a gathering of both current Columbia and Barnard students and alumni, consists of “organized collective carries”; according to the Carrying the Weight Together website, its goal is to “give [Sulkowicz] and other survivors of sexual assault in our community a powerful symbol of our support and solidarity, and show the administration that we stand united in demanding better policies designed to end sexual violence and rape culture on campus.”

Carrying the Weight Together organized the first collective carry via Facebook; on September 10, participants gathered to aid Sulkowicz in transporting the mattress from East Campus to her class in the university’s Schermerhorn Hall. A second event is scheduled for today at noon as part of the Stand With Survivors speak-out planned on Low Steps. Said Rickard about the movement to the Columbia Spectator, “When I heard about Emma’s thesis project, I had a really strong reaction and felt I understood what Emma was doing as an artist and wanted to be in solidarity with her and other survivors. I think there’s been a general feeling from people among both schools that there’s a great sense of support for Emma and other survivors,” she continued, “and this would be great for people to get involved on a daily basis.”

And without a doubt, that support and solidarity is one of the most important things to show right now. Why? Not because it breaks Sulkowicz’s statement down into easier-to-manage bites, but because it makes it bigger, heavier, harder to ignore or brush off. As Alexandra Brodsky of Feministing wrote:

“This isn’t about easy allyship, gun and glamorous symbolic solidarity. Carrying her weight requires sacrifice, as all real change does…. [It] is also requires us to follow her where she is going, whether that be to class or to a new vision of how our world could work.

"The idea isn’t to make trauma palatable, each of us holding little crumbs of the problem in out pockets so that it doesn’t feel so big anymore…. Rather, if we all helped carry the weight of injustive, we could not bear it. And so we would finally stop tolerating what we’ve been content to force others to carry alone.”

What Sulkowicz is doing — and what Carrying the Weight Together is doing — is bigger than just one campus. It’s bigger than all of nation’s campuses. It’s something we all need to hear.

I just hope everyone is listening.

Image: Carry That Weight Together International/Facebook