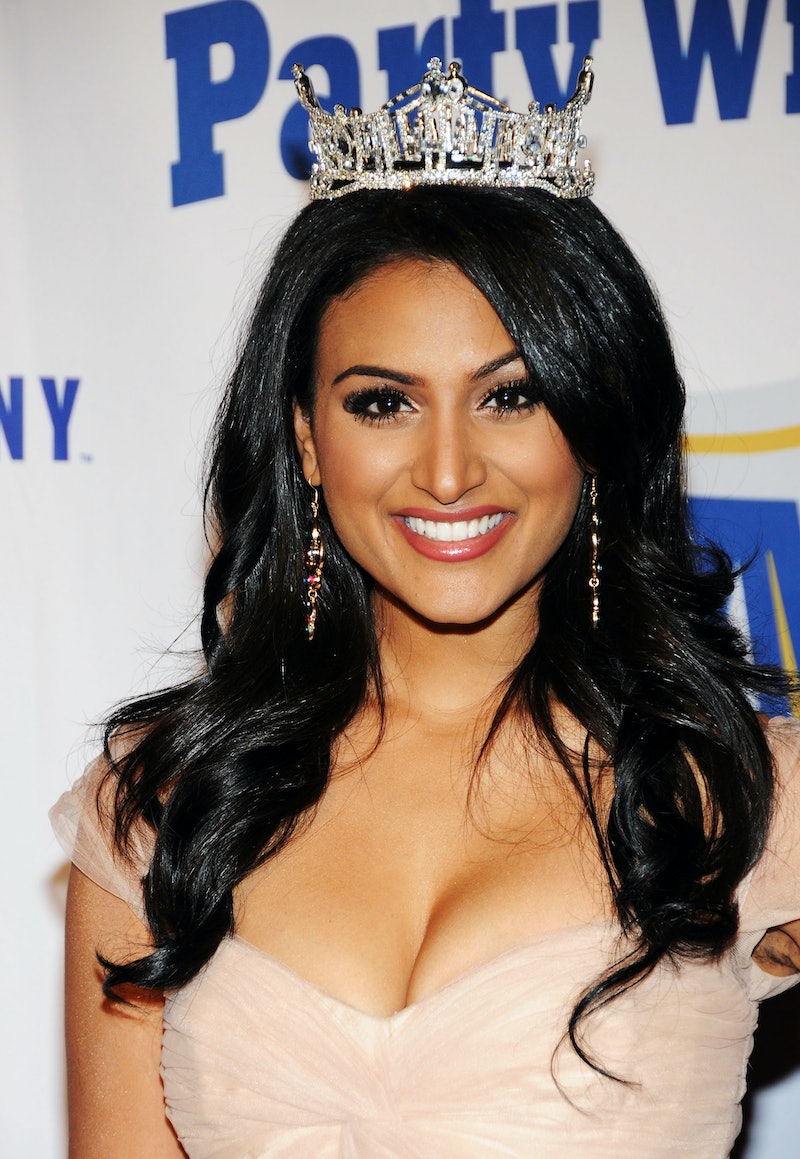 For the lucky lady who will be crowned Miss America 2015 this weekend, there's a big adventure that's just beginning, but last year's winner Nina Davuluri is about to see her crown-wearing journey come to a close. Not that it hasn't been exciting — we're all pretty aware of the ridiculous storm of racism that erupted when she was announced the winner last year because she didn't look like some viewers' idea of "traditionally American." Yes, Davuluri has Indian heritage, but she's also American, and here in America, we celebrate diversity. Or, at least, I like to think we do. And why wasn't everybody more excited that she's the first Indian Miss America ever? That's huge.

But beyond battling the critics, Davuluri's had a pretty successful term as the reigning Miss America. Not only did she work to support her platform, "Empowering women, Overcoming Stereotypes and Breaking Barriers," but Davuluri also acted as a spokeswoman for Peta, encouraging people to adopt their pets from shelters, like she did with her dog, Hanuman.

But before we see Davuluri crown her successor on Sunday, there are a few things you need to know about her. (Spoiler alert: She's kinda awesome.)

She ignored the pressure from her family and followed her dreams

Nope, it's not the pageant thing they're against — Davuluri's parents are in full support of her career as Miss America. But what they did try to pressure her into was medical school, which Davuluri was fully planning on pursuing until she saw the light during her year with the crown and decided to go her own way. After passing on her title, she'll be heading back to school to earn her MBA instead.

We live in a big, beautiful world filled with people who are different in so many ways; it's just that some of those people are different because they suck. Before Davuluri won Miss America in 2013, she prepared herself for the torrent of racism that came her way...and, if you ask me, she handled it like a pro. She told NBC News:

Unfortunately, I was prepared. However, I can honestly say that for every one negative tweet, comment, or post, there were hundreds if not thousands of people who had positive words of encouragement and support all across the country and world for that matter.

She loves being a role model

As the first Indian Miss America, Davuluri's proud to be breaking down barriers for girls who needed a role model who look like they do, and Davuluri is glad to be the person they can look up to. Beauty doesn't have one single definition, and because of Davuluri, there are girls out there who might not find it a bit easier appreciate the beautiful skin they were born in.

"I'm so happy this organization has embraced diversity," Davuluri said the night she won. "I'm thankful there are children watching at home who can finally relate to a new Miss America."

She helped get a high school kid out of trouble

As popular as elaborate promposals are these days, some teens are going even bigger...you know, like asking Miss America to prom. When Patrick Farves, a student at Central York High School, presented Davuluri with a flower and asked her to be his date when she made an appearance at his school, he ended up getting suspended for his gesture, apparently because the administration knew his plan ahead of time and warned him not to do it.

Fortunately, though, Davuluri didn't hesitate to take up for him. “I was flattered by the gesture, although I am unfortunately unable to attend due to my travel schedule,” she posted on her Facebook. “I later learned of the disciplinary action taken and reached out to the school in hopes that they will reconsider their decision.”

Good guy Miss America. I knew I liked her.