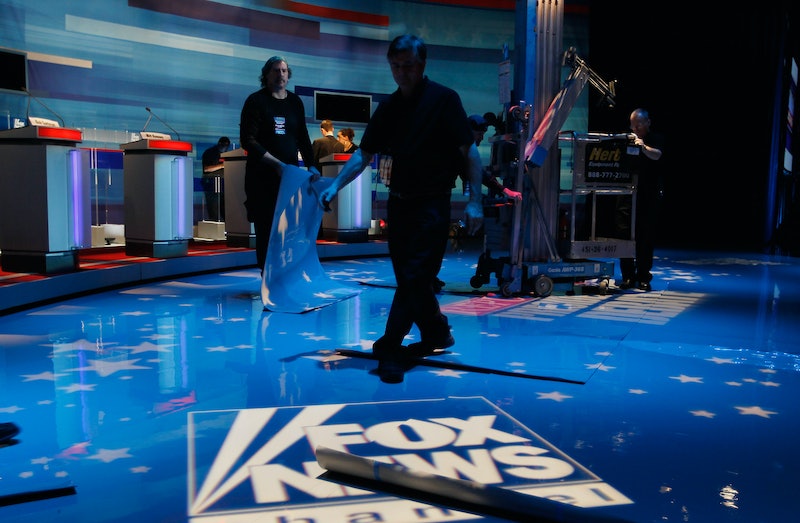 As everyone knows, women who are interested in sex and makeup tips are inherently uninterested in politics — and when I say "everyone" I of course really mean Fox News. Because for the good folks over at Fox News, Cosmopolitan 's recent decision to cover politics is down right baffling. As revealed in a clip from the Fox show "Outnumbered," even when most of the people in the room are women, it still doesn't stop the guys from saying stupid things — and doesn't get them any closer to understanding women or women's issues.

The women in the segment manage to speak intelligently about Cosmo's possible motives, and the magazine's decidedly pro-choice stance — I don't happen to agree with their take on it, but hey, these women have a position on this debate and they can talk about that. But host Guy Benson manages to step far away from the talking points by suggesting that the women who read Cosmo don't even care about politics to begin with.

Dude, did you guys learn nothing from the fall out of the "Beyoncé voters" thing?

"Is this beyond the purview of what the readership of this magazine actually wants to see?" he wonders. "Do they want to be preached at about politics when they really just want to check out the latest fashions and these wonderful shoes you guys are all wearing?"

The whole segment is clearly ridiculous for a lot of reasons — for instance, attacking a women's magazine for focusing primarily on women's issues instead of broader national topics while in the same segment criticizing them for going "outside their jurisdiction" so to speak by covering politics at all. Or, as Cosmo itself points out, acting as though writing about sex somehow makes you inherently unqualified to talk politics.

But still, Benson's shoes comment probably takes the cake. Way to disrespect your fellow hosts, who all frankly seem way more intelligent and politically aware than you, dude, by reducing them down to their footwear. Nice job.

Plus, the implication that women don't care about fashion and celebrities and sex tips and politics all at once is not only sexist — no one questions whether guys reading sports news should be politically engaged — it's also breathtakingly out of touch. Has this man never seen any women's media?

I mean, right now you, dear reader, are on a women's website that has a fashion division and a news division that exist quite comfortably along side one another. We, like plenty of other sites, run articles on everything from sexual harassment to lingerie to celebrity gossip to sex tips to kids books to politics and foreign affairs. Because it turns out women are fully rounded human beings with multi-faceted lives and diverse interests. Like, you know, people.

So this cutesy thing where you reduce us down to our (often stunning) footwear? It's not just insulting. It's also really, really dumb of you. Stop doing that.

More like this
23 Abortion Funds In States With Trigger Bans To Donate To
By Emma Carey
How To Protect Your Digital Privacy If You Need An Abortion Post Roe v. Wade
By Kaitlyn Wylde
How To Fight For Reproductive Rights, Based On How Much Time You Have
By Courtney Young
Here's Your Daily Horoscope For May 18, 2022
By Mecca Woods
Get Even More From Bustle — Sign Up For The Newsletter