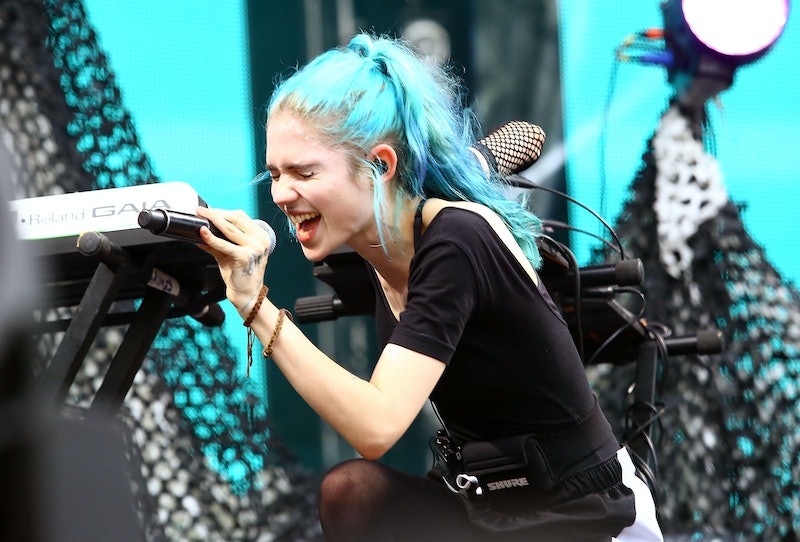 Rookie founder, fashion mogul, and all-around perfect human being Tavi Gevinson was interviewed by Grimes (real name Claire Boucher) for the latest issue of Interview magazine, and it is wonderful. Both young women are equally ambitious and talented in their own right, and they are linked by Boucher's past contributions to Gevinson's seminal publication for young girls. Grimes is currently working on her fourth studio album, and Gevinson is currently living in Chicago while starring alongside Michael Cera and Kieran Culkin in the Steppenwolf Theatre Company's production of Kenneth Lonergan's This Is Our Youth . During their conversation, the two chatted about their industry experiences, feminism, and pop culture. Here are three of their best exchanges, but you should definitely head over to Interview for the full story:

On their mutual love of Taylor Swift:

BOUCHER: The neat thing is it's smart. The references are smart. To me, it's adult music. I could see any 40-year-old liking it.

GEVINSON: I could easily talk about Taylor with you forever. I think it's so well crafted. And even Neil Young endorses the music, not that we need some old guy to tell us if something's okay—but it does have to do with people thinking it's dumb, young girl music. Which is frustrating because it kind of waters down all experiences of all young women and says that those experiences are somehow invalid. Sleeping with a guy for the first time can be a big deal for a lot of girls. And it's really amazing that she kind of tapped into that consciousness and gave all these girls something to relate to and in a way that I think is pretty feminist.

On the pressures of the entertainment industry and knowing your worth:

GEVINSON: It's really unpleasant. And I think for a lot of people who are on the business side of the entertainment world, creatives are obstacles. The e-mail that I had to write this morning was basically saying, "I'm fully aware of how valuable I am and how important I am to this project. That should be respected and my needs should be taken seriously. It should not be a given that I do everything you say. So, take that!" I had to wear high heels to have the confidence to write the e-mail. I was sitting in my bed in high heels.

BOUCHER: So it's really hard for me to yell at people, because I'll feel so guilty about it. But if I don't, then they don't take me seriously and it's this endless cycle.

On taking on jobs while upholding their feminist ideals:

BOUCHER: Is there any feminist dimension to the roles you take, with regards to playing your age or how you're perceived, and how women in general are perceived?

GEVINSON: I would also never want to be a part of something that I think is poor in taste or doesn't align with what I believe in ... There have certainly been parts in the scripts I get for, like, a hooker with a heart of gold or a woman saving a man, as if that's our job in relationships, and I just don't even want to fuck with it at all, so I just don't audition. But with Rookie and with acting, my feminism is just part of how I view the world, so it naturally comes into play. It's not like I put on my feminist glasses. It's just kind of naturally there.

More like this
Taylor Swift Is "Spiraling" After Releasing "This Love (Taylor's Version)"
By Jake Viswanath
Sandra Bullock, Girlboss Extraordinaire
By Matt Harkins & Viviana Olen
Lydia Leonard Is Setting The Record Straight
By Olivia-Anne Cleary
This Is How Taylor Swift Feels About Joe Alwyn’s Steamy New Series
By Alyssa Lapid
Get Even More From Bustle — Sign Up For The Newsletter