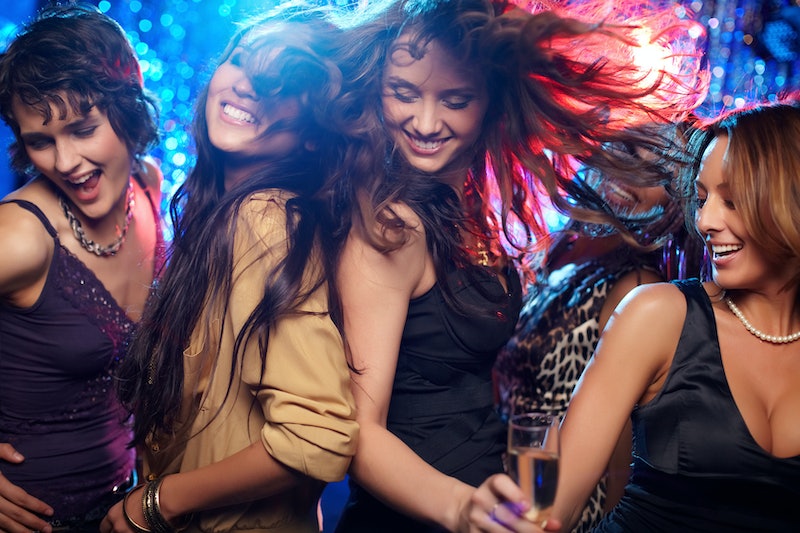 Korean artist Younghui Kim has just invented a fashionable contraption that will make your nights out even more eventful (or embarrassing). Her kinetic wearables, Metamorphosis, features a woman's dress and man's blazer that detect when you're drunk. If you're looking for an additional reason to draw attention to yourself while throwing back tequila shots with friends, consider this your newest sartorial choice the next time you're hitting the bars.

While the shoulders on the dress expand and transition between different colors, the collar on the blazer rise to hide the wearer's face. According to the website, the shoulders of the dress are designed to express how a female's confidence increases when consuming alcohol. However, the blazer function is paradox, hiding the male from apparent embarrassment when it senses too much alcohol on his breath. So I guess, this is about social standards, too? The wearables were first presented in June at a wearable Hackathone event at Art Center Nabi.

Kim's invention is clever, albeit a bit unnecessary, given that beyond you stumbling out of the bar attempting to hail a taxi, dialing your ex's number, or puking on your best friend's shoes, your clothes are glowing, expanding and rising, putting you on exhibit for all those walking by.

Nonetheless, Kim is right on the cusp with other designers and companies stirring the conversation on wearable technology. During this past season's New York Fashion Week, Rebecca Minkoff debuted her newest collaboration with Case-Mate featuring two bracelets: one that alerts you of notifications and another that unlinks to reveal a USB cord that lets you charge your phone on the go. Just a couple days later, Apple released their much-anticipated Apple Watch, which includes features from changing the face of the watch with a quick tap to sharing your heartbeat with other Apple Watch wearers. (Although, many are rendering the watch a bit frivolous, to say the least.)

Among the booming conversation, however, is whether or not wearable technology is even necessary. Furthermore, is it useful? That, of course, depends on the wearer and buyer, but one things for certain: Glowing shoulders and booze are two things that should never mix on a Friday night.