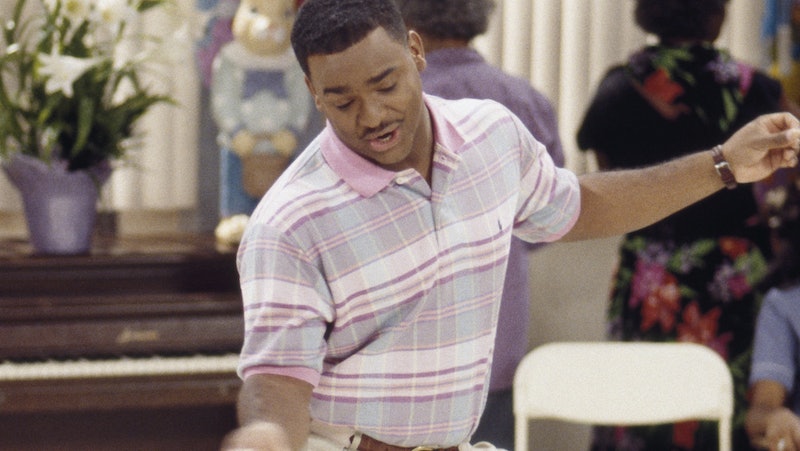 When fall hits, it means two really important things. One, Pumpkin Spice Lattes are back and in my belly, and two, Dancing with the Stars returns to ABC. When this season's Dancing with the Stars cast was announced and Alfonso Ribeiro was on the celebrity list, my childhood self completely emerged from the depths within me and started dancing the only way it knows how. Yes, my childhood self started to do the famous Carlton dance. Casting Ribeiro (aka Carlton Banks from The Fresh Prince of Bel-Air) on DWTS has to be one of ABC's best casting decisions in the history of ever, so kudos to the people that made that happened.

Obviously we already know that Ribeiro has the moves within him to wow audiences. He still wows audiences until to this date with his Carlton dance. Seriously, the Carlton dance in 2014 is just as entertaining, if not more entertaining than it was when the showed aired (1990 - 1996, let it sink in that we are just shy of twenty years since Fresh Prince ended). So let's take a trip down memory lane and remember just how great that dance was, shall we?

It's just as incredible as I remembered it was. And luckily for me (and the rest of the world), we might not have to live through old videos of Carlton doing his signature dance, as Ribeiro has even said he is willing to do the Carlton dance if that's what it means to win DWTS' mirror ball trophy. Mark my words, if there is a Carlton dance (specifically choreographed to "It's Not Unusual" by Tom Jones) it will break television. Mark. my. words.

To pay the appropriate tribute that the Carlton dance deserves, let's take a look at the legacy of Ribero's classic moves, as told by the dance's biggest fans:

The "I've Done this Before" Carlton dance

The "Where's the Spotlight" Carlton dance

The "Get It" Carlton dance

The "Couldn't Be Happier to be doing the" Carlton dance

OK, so maybe that last one wasn't a "fan" video, but I'd like to think that Will Smith is a fan of the Carlton dance, so in a way, it totally counts.

Make sure to watch Dancing with the Stars to see if Ribeiro can (Carlton) dance his way to the mirror ball trophy. If The Carlton is any indication, he's already a frontrunner.

More like this
Are Tom Daley & Louis Theroux Bound For 'Strictly'?
By El Hunt
Stavros Flatley's Lagi Demetriou Is A Dad Now & Wow, I Feel Old
By Sabah Hussain
Marcus Rashford Took Inspo From Kravis For His Adorable Proposal To Girlfriend Lucia Loi
By Frances Stewart
Ryan Reynolds Brought Some Famous Friends To Wrexham A.F.C's Last Game Of The Season
By El Hunt
Get Even More From Bustle — Sign Up For The Newsletter