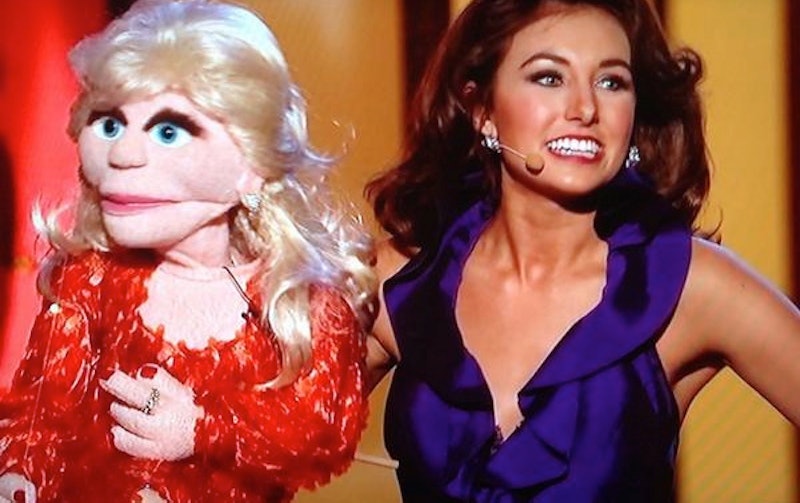 If you thought that Miss America winner Miss New York's Pitch Perfect -inspired talent was off the beaten path, you must have not seen Mackenzie Bart's performance. Bart aka Miss Ohio showcased her ventriloquist talent by singing the Mary Poppins song "Supercalifragilisticexpialidocious" with her Dolly Parton-inspired puppet Roxy. It was actually pretty impressive to watch Bart and Roxy trade off singing the song at full speed. You could hardly see Bart's mouth moving when Roxy would speak.

Bart says that her talent began when she was given a Charlie McCarthy doll (the standard ventriloquist dummy) at age 10 and has been practicing ever since. To anyone watching the show, the decision to go with the act seemed a little out of place amongst the ballet and singing performances, but it sure helped Miss Ohio stand out. Besides, in 1965, the crowned Miss America Vonda Van Dyke actually won on a ventriloquist act, so it's not impossible to do.

Unfortunately, Bart didn't win the competition, but she did win the night with her hilarious talent. I hope in the future more contestants branch out with their talents because there are only so many dances to Frozen songs that I (and America) can handle.