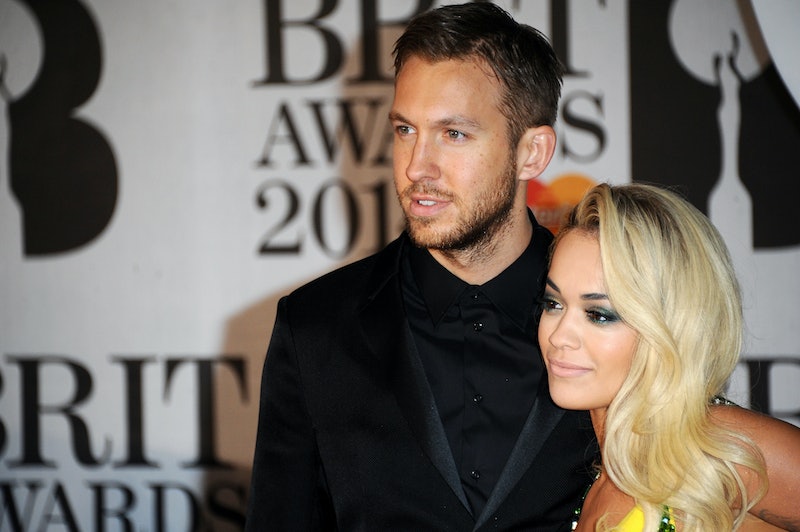 If you've heard it on the radio, you've probably wondered: Is Calvin Harris' new single, "Blame," about his relationship with ex-girlfriend Rita Ora? It's a good question! "Blame" tells the story of a man who feels guilty about cheating on his partner, but isn't willing to accept responsibility for his actions. "Blame it on the night, don't blame it on me," British singer John Newman pleads on the song's frenzied chorus. Later, he apologizes and says that he'll "be better" in the future. Uh, Harris? Is there something that you need to get off your chest?

Harris announced the end of his relationship with Ora at the beginning of June on Twitter, but the circumstances surrounding the couple's breakup are still unknown. Is the story in "Blame" based actual events that took place while Harris and Ora were still dating?

Sorry to disappoint, but no, it's not.

Harris set the record straight about "Blame" in an interview with Ryan Seacrest on Sept. 5, revealing that Newman actually wrote the lyrics to the song entirely by himself. In response to an article posted on Ryan Seacrest's website at the end of August that suggested that "Blame" could be about Ora, Harris said, "...it definitely isn't. [Newman] wrote that song."

Though Harris and Ora's relationship appeared to have ended amicably at first, controversy arose last month when Harris wouldn't allow Ora to perform "I Will Never Let You Down" at the 2014 Teen Choice Awards. Ora told Seacrest in an interview on Aug. 12:

Wow. In other words, don't expect Harris to open up about his relationship with Ora in his music anytime soon! Check out the steamy music video for "Blame" below.

More like this
Harry Styles Opened Up About Olivia Wilde With A Rare Comment About "Trust"
By Sophie McEvoy
Joe Alwyn Reacts To Taylor Swift Earning An NYU Doctorate In A Rare Interview
By Jake Viswanath and Nicole Pomarico
Harry Styles Addresses The Theory That His New Song "Daylight" Is About Taylor Swift
By Jake Viswanath
Is Megan Fox Pregnant? MGK Gave A Shout-Out To Their “Unborn Child” Onstage
By Hugh McIntyre
Get Even More From Bustle — Sign Up For The Newsletter