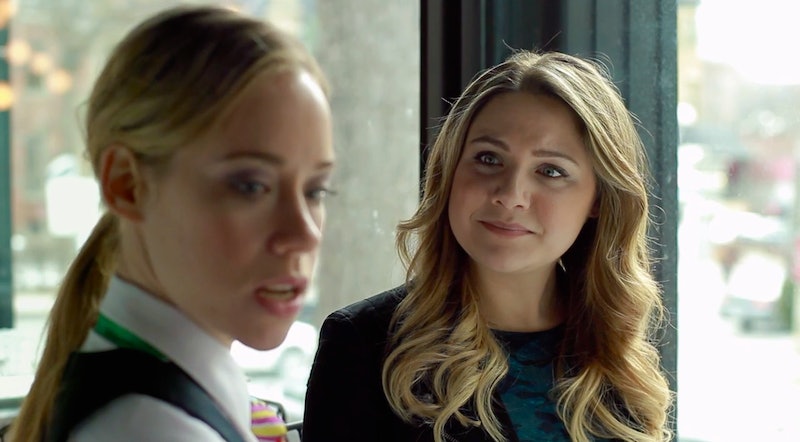 If you're anything like me, you remember Lauren Collins as Paige from Degrassi:The Next Generation , obviously. Or, you might look at her face and think ... wait, who's that girl? Was she on some Nickelodeon show? My chem class?

Lauren Collins, now 28, is used to the confusion. And now, she's using it as the inspiration for her new short film, Zero Recognition. The film, available for a short time on Venmo, is directed by fellow former Degrassi actor Ben Lewis, who played Bobby Beckonridge in Season 10, and was also co-written by the two longtime friends.

"We were across the street of our apartment, going to the movies, and the cashier at the concession stand recognized me and it was a very strong reaction," Collins tells Bustle. "I think it was the next day after that when we were like, 'We should tell funny really self-aware stories about my experience.'"

The short film depicts Collins as a fictional character with a very similar backstory to her own. She's a former teen star who is sometimes recognized in public ... and also costarred on a teen soap with Drake. The only difference? In the film, she's also going on her first online date, something Collins has never done. (Here's a look at the trailer, but you can watch the full film here.)

"I think the main reason I haven’t is that is freaks me out that someone could, you know, recognize me from my profile and I don’t know, post it somewhere," Collins says. "And then I have a major reality check when I think about who really cares — no one really cares. So that’s totally what the balance of ego and reality is, especially being a Canadian recognizable person."

So how does Collins screen out the potential fanboys? I mean, girl's gotta date, right?

"Like, I know almost immediately, if the first question they're asking is, Do you know Drake? then they don’t really care at all about me. Or at least, I assume there isn’t as much of a genuine interest in me as there is about who I might know or who I may be connected to ... It’s probably part of the reason of why I am single and why I do find it hard to open up to people."

Since she's still afraid to set up a online dating profile, we had Collins answer OKCupid's profile questions for Bustle, just to, you know, help. Worthy dudes in Toronto, take note.

Well, if the real-life Paige Michalchuk has a hard time meeting the right guy, then perhaps there's hope for all of us. It's easy to think that being a former teen star (especially of the blonde babe variety) would mean an endless stream of interested suitors, potential gigs, and parties. Not so much, Collins says.

"I think the other thing that people assume is that I am a millionaire and have this fabulous life. When the reality is I don’t, and yeah, the show was incredible and did amazing things for me, but it ended a couple years ago and now I’m hitting the pavement, just trying to get acting jobs and put myself out there and it’s the life of a sometimes-working actor. It’s hard."

Collins says she's currently considering making the move to Los Angeles to pursue her career further, though she says that compared to Toronto, finding work in LA is "definitely a tough nut to crack."

At least Collins spent her adolescence playing a character who had confidence in spades. After all, Paige was even fluid before it was cool, dating the female character Alex Nuñez in Season 5.

"She decided she liked a girl and it was way before that was on every television show and everyone was doing it," Collins says. "It wasn’t necessarily about coming out as a lesbian or coming out as gay, but it was about loving who you love and not having labels. And I think that confidence is something that I strive for still."