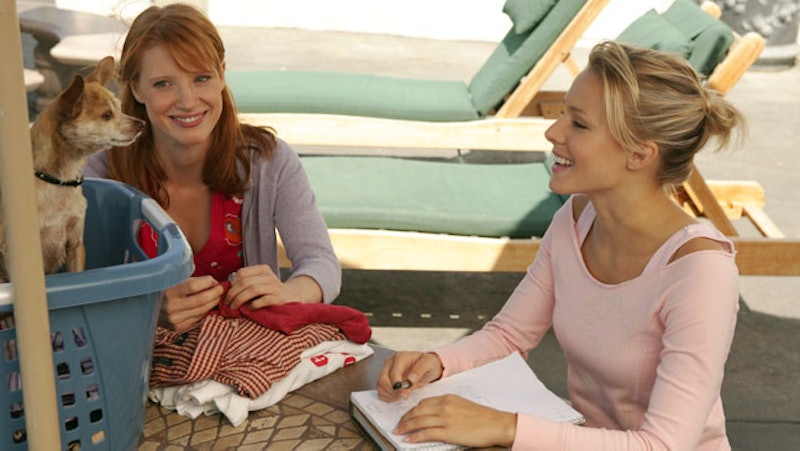 Your 27th birthday has a lot of baggage in our culture — and not just because it’s the age when many of our favorite rock stars ended up knock-knock-knocking on heaven’s door (although that certainly can’t help). Staring down the barrel of your ten year high school reunion, you're suddenly deluged with wedding invites, weapons-grade hangovers, and "helpful" comments from your mom/ gynecologist/ dry cleaner/ dog about how "30 is just around the corner." The screeching cultural messages about how you have to have it all figured out at 27 can drive even the most focused and successful lady half-mad. But if you still haven’t quite figured out what you’re going to do with the rest of your life, all the “you're almost 30!” talk can feel like something halfway between a referendum and a curse.

But, like most curses uttered by anyone besides Angelina Jolie, it’s all pretty much a load of hot air. There’s plenty of time to get to the place in life where you want to be after 27 — even if, at 27, you have no clue where that place will be. The nine women below (plus yours truly) were all still kind of wandering in the dark at age 27, wondering if they’d ever make it, or even ever figure out what the “it” was that they wanted to make.

So keep the faith, and, as another 27-year-old once said, don’t believe the hype. Because 27 isn’t the end — sometimes, it’s barely even the beginning.

Wiig was just getting her comedy bonafides as a member of LA’s Groundlings Comedy Troupe at 27, after spending a few years working odd jobs, including positions as a florist, a house painter, and a waitress. She was still two years from making her TV debut on Spike’s The Joe Schmo Show, and wouldn’t even make her first appearance on Saturday Night Live until 2005, at the age of 32.

At 27, Blume wasn't even publishing yet. Though she graduated from NYU in 1961, she didn’t begin writing until her own children were in preschool, publishing a picture book called The One in the Middle is the Green Kangaroo , in 1969, at the age of 31. Her breakout young adult novel, Are You There, God? It’s Me, Margaret, followed in 1970.

Child was working as an advertising copywriter at an upscale furniture store at 27. It wasn't until she was 28 that a clash with new store managers led her to quit. "I made a tactical error and was out," she explained on the application for her next job — a position with the World War II secret intelligence agency the Office of Strategic Services. Child worked there through the end of World War II as typist and researcher. There, she met and married Paul Child, a fellow OSS employee, in 1946, when Child was 34. Their move to Paris two years later, for Paul’s work, set Child off on the beginnings of her culinary career.

The first woman to be elected governor of Texas, the legendary political figure Ann Richards spent her 20s like many women of her generation: raising her four children, teaching history at a junior high school, and campaigning for local liberal politicians. (OK, so maybe that last hobby was unique.) It wasn’t until the 1970s, when Richards was in her 40s, that she became a more outspoken political activist, running training sessions for female political candidates and supporting the Equal Rights Amendment. She won her first political spot, a spot on the Travis County, Texas Commissioners' Court, in 1976, at the age of 43, and became governor fourteen years later, at the age of 57.

Musician, actress, and punk pioneer Debbie Harry was pursuing a not-wildly-successful career as folk singer in New York City at age 27. She was also performing back up vocals for a band called the Wind in the Willows, and working a number of odd jobs, including a day job as a Playboy Bunny waitress at the Playboy Club. She didn’t even join the band that would eventually become Blondie until 1974, when she was 29.

At 27, the future Nobel Prize winner Alice Munro was married to her first husband— she once noted that in the small town she came from, “if you weren't married at 25 you were a failure” — and raising three daughters in North Vancouver while her husband worked at a department store. She began co-managing their family-owned bookstore, Munro’s, a few years later, but wouldn’t begin to publish stories until her 30s. She didn't see the publication of her first book, Dance of the Happy Shades until 1968, when she was 37.

Oscar-nominated and Golden Globe-winning actress Jessica Chastain graduated from the prestigious acting program at the Juilliard School in 2003, at the age of 26 — but, surprisingly, she had difficulty landing acting gigs afterwards, due to her unique look. "Being a redhead and not having very conventionally modern looks, it was confusing for people and they didn't know exactly where to put me," she told InStyle UK in 2013. “I'm in LA and I'm thinking, 'Why can't I get an audition for a film?'"

At 27, she got her first on-camera acting gig, in a CW reboot of the vampire soap opera Dark Shadows (which never ended up airing). She followed that up with years of guest spots on shows like Veronica Mars and Law & Order . She wouldn’t even see the release of her first film, Jolene , until she was 31.

At 27, the erstwhile Sonic Youth frontwoman was still one year away from forming the band that made her famous — and just beginning to work as a musician at all. At the time, she was just another visual artist from LA who had recently transplanted to the East Coast. After moving to New York, she’d “go and see bands downtown playing no-wave music…I just felt like, Wow, this is really free. I could do that.” The shows inspired Gordon to begin playing the bass, and also set the stage to meet her future band members Lee Ranaldo and Thurston Moore (who would become Gordon’s husband and creative partner for three decades).

Despite graduating with an MFA in drama from Cornell, Jane Lynch (know today as Sue Sylvester on Glee ) herself spent the next 15 years performing in Chicago’s live comedy scene, with groups like the Annoyance Theater — where she played Carol Brady in a production of “The Real Live Brady Bunch” with an equally-young Andy Richter. Lynch also popped up in goofy B movies, like her 1988 film debut Taxi Killer , a tale about vengeful female cabbies. She wouldn’t have a major big screen role until her appearance, at the age of 33, in The Fugitive. And she wouldn’t find steady and significant work that made use of her prodigious comedy chops until her 2000 role in Christopher Guest’s mockumentary Best in Show.