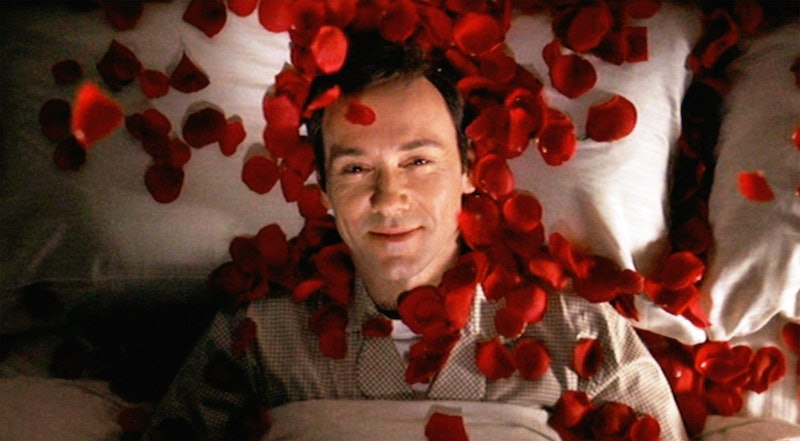 It's hard to believe it's been 15 years since American Beauty hit theatres. It's been one and a half decades since Kevin Spacey won the 1999 Oscar for Best Actor for the film, and 15 years since audiences were introduced to the symbolic value of blood red rose petals. And while the film may have aged, it's blockbuster star Kevin Spacey is still killing it on the screen. His work as Frank Underwood in Netflix's House of Cards offered him a Best Actor nod in the 2014 Emmys for Season 1, and surely there's more nominations to come.

So while both characters are icons in their own right, we wonder how hard it is to tell these two Kevin Spacey characters apart based on their infamous one-liners. So we dare you: Can you figure out who said it, Frank Underwood or Lester Burnham?

Take a whack at it.

1. "A great man once said, everything is about sex. Except sex. Sex is about power."

2. "Look at me, jerking off in the shower... This will be the high point of my day; it's all downhill from here."

1. That would be the 46th fictional president of the United States, Frank Underwood.

1. "Will someone please pass the fucking asparagus?"

2. "For those of us climbing to the top of the food chain, there can be no mercy. There is but one rule: hunt or be hunted.”

1. And turn off that damn Lawrence Welk music while you're at it! We heard you loud and clear, Lester.

2. Want some ribs with that pearl of wisdom, Frank?

1. "This isn't life, it's just stuff. And it's become more important to you than living. Well, honey, that's just nuts."

2. “Money is the Mc-mansion in Sarasota that starts falling apart after 10 years. Power is the old stone building that stands for centuries. I cannot respect someone who doesn’t see the difference.”

1. “The best thing about human beings is that they stack so neatly.”

2. "today I quit my job. And then I told my boss to go fuck himself, and then I blackmailed him for almost sixty thousand dollars."

1. *Shudders* Thanks for that image, Underwood.

2. Good for you, Lester! Take back the power!

2. “I love that woman. I love her more than sharks love blood.”

1. Except let's not forget that your "dick is in a mason jar under the sink" still, Lester.

2. Claire and Frank Underwood, a match made in Capitol Hill Heaven.

1. “There’s no better way to overpower a trickle of doubt than with a flood of naked truth.”

1. Whatever you say, Commander-in-Chief!

1. "I feel like I've been in a coma for the past twenty years. And I'm just now waking up."

1. "From this moment on you are a rock. You absorb nothing, you say nothing, and nothing breaks you.”

1. Or you'll frame my death as a suicide, right Frank?

2. Except maybe make my burger extra-rare, am I right Les?

1. "It's a great thing when you realize you still have the ability to surprise yourself. Makes you wonder what else you can do that you've forgotten about."

1. Like drive a 1970 Pontiac Firebird and make a living flipping burgers, eh, Lester?

More like this
Michael & Kathleen Peterson’s House From ‘The Staircase’ Has New Owners
By Kadin Burnett and Kayla Blanton
What’s New On Netflix: A Victoria Justice Rom-Com & The Return Of David Letterman
By Arya Roshanian
'Doctor Who’s New Star Is Already Huge On TikTok
By Maxine Harrison
How Ncuti Gatwa's 'Doctor Who' Casting Impacts His 'Sex Education' Future
By Nola Ojomu
Get Even More From Bustle — Sign Up For The Newsletter