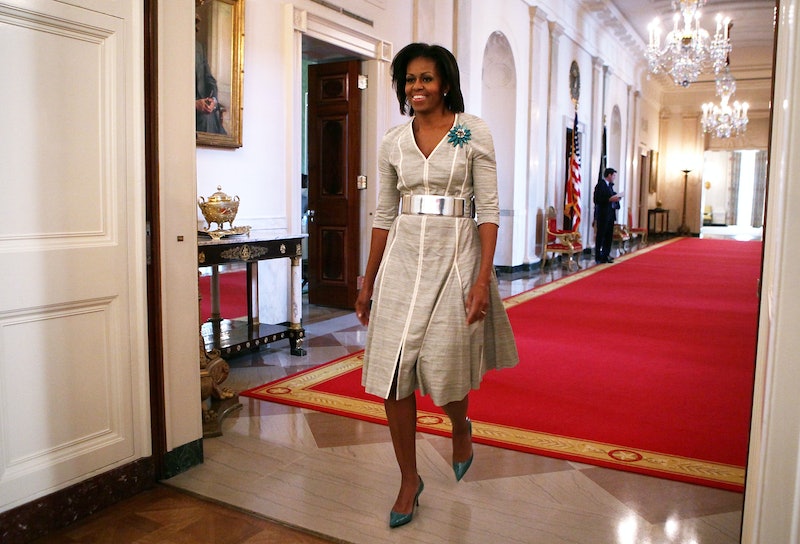 Washington D.C. is about to become a bit more stylish. Michelle Obama is gathering up a bunch of designers and fashion execs for the “Celebration of Design” event at the White House. So, who’s going? Invites have already been sent out for the October 8 event —which is being held the night before the National Design Awards in New York — to quite a few elites in the fashion world, including Maria Cornejo and top executives from Talbots and Jimmy Choo. Yeah, looks like we missed that boat.

The shing-ding will be held on October 8, right in the middle of Cooper-Hewitt Museum’s National Design Week, which celebrates how designers impact daily life. And who could be more perfect host than Michelle Obama? She's been known to rock a J. Crew cardigan when fighting childhood obesity by day and a Marchesa dress at to the White House Correspondence Dinner at night. No matter what she wear, she's always fabulous.

Sure, invites have already been sent out, but there should be a few more people added to that list. Wouldn't it be fun if Michelle mixed things up and invited a some of the more exciting people in the fashion world? Here are nine designers/fashion execs/celebs-who-kind-of-have-a-clothing-line we hope will be attending.

Ms. Obama is ALWAYS wearing J. Crew. Who better to talk about the latest cardigan or pencil skirt to than the creative director herself?

Hey, they have a line at PacSun, so that pretty much makes them designers... right?

She's on Dancing With the Stars. She does cartwheels at the end of her shows. 'Nuff said.

Because what would be more hilarious?

Again, for the lolz.

Because we all get style inspiration from her.

His clothing line basically is America.

He'd blend right in with the secret service.

Hey, she has a clothing line a Kmart. It counts.

More like this
The Best Looks From Kourtney & Travis’ Wedding
By Dominique Norman
What Is Barack Obama’s Net Worth? He Makes *Way* More Now As An Ex-President
By Hugh McIntyre
Taylor Swift, Kerry Washington & More Speak Out On Uvalde Mass Shooting
By Jake Viswanath
Kylie Jenner Roasts Kendall For Her Cucumber Cutting Skills On TikTok
By Jake Viswanath
Get Even More From Bustle — Sign Up For The Newsletter