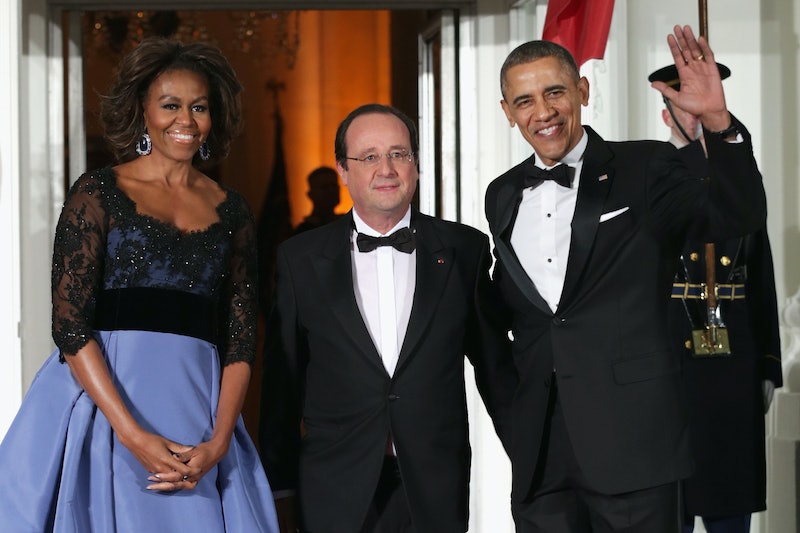 For Tuesday night's Official State Dinner in Washington, D.C., Michelle Obama wore a Carolina Herrera dress in which she looked stunning. (Big surprise, I know.) The dress was tasteful and created by an American designer. It seemed a perfectly appropriate choice of ballgown for the First Lady to wear for a formal occasion.

And many sources agreed that Obama "wowed" in the gown — but one took major umbrage with the look: Twitter-curation site Twitchy. It began when NBC News Producer Shawna Thomas posted the following tweet praising the gown:

For Twitchy, #BOWDOWN was too strong a show of support (the hashtag originated among fans of Beyoncé). They appeared to take issue with the fact that MObama would dare to wear — gasp — an expensive ballgown to a high-profile dinner (the dress is estimated to have cost between $10-12,000).

In response, Twitchy and its founder Michelle Malkin invited followers to take selfies of themselves in cheap clothes, then retweeted the responses:

Taking a photo of yourself in ratty yoga pants seems like a pretty ineffective way of critiquing the First Lady's alleged fashion excesses. As Amanda Marcotte of Slate points out, what would Malkin's response have been if Mrs. Obama had showed up at the State Dinner in some of the items her followers tweeted?

Color me skeptical, but I have trouble believing that Malkin and her followers would be satisfied if Michelle Obama followed their advice and, at future state dinners, showed up in a halter top, cutoffs, and a pair of house slippers, with a fanny pack instead of a clutch purse for stashing her lipstick. Not to be overly cynical about Malkin and her motivations here, but I suspect that instead of applauding the first lady for her humility and populist fashion sense if she showed up in leggings from Target, she instead would denounce Obama for lacking class and/or for thumbing her nose at the traditions of this great nation.

And while, yes, she does wear designer labels, this isn't the first time the First Lady has shown up in high fashion. A quick look back at Mrs. O's style history brings up moments in designers like Jason Wu at the 2009 Inaugural Ball and again at the 2013 Inaugural Ball, and for State Dinners, Alexander McQueen in 2011, Marchesa in 2012, and Naeem Khan in 2013. (This isn't even mentioning other times she's been spotted in Herrera.) Bottom line: None of these designer outfits are cheap.

Now, if you'll excuse me while I go back to look at pictures of that stunning dress.

More like this
Michelle Obama Opened Up About The "Discord And Discomfort" Of Marriage
By Stephanie Topacio Long
Here Are All 703 Outfits Rachel Wore On Friends
By Kat George
Dua Lipa On YSL Beauty, Plus Her Fearless Approach To Hair & Makeup
By Erin Stovall
Hailey Bieber Just Wore A Dress Covered In Piercings For Miami Art Basel
By Dominique Norman
Get Even More From Bustle — Sign Up For The Newsletter