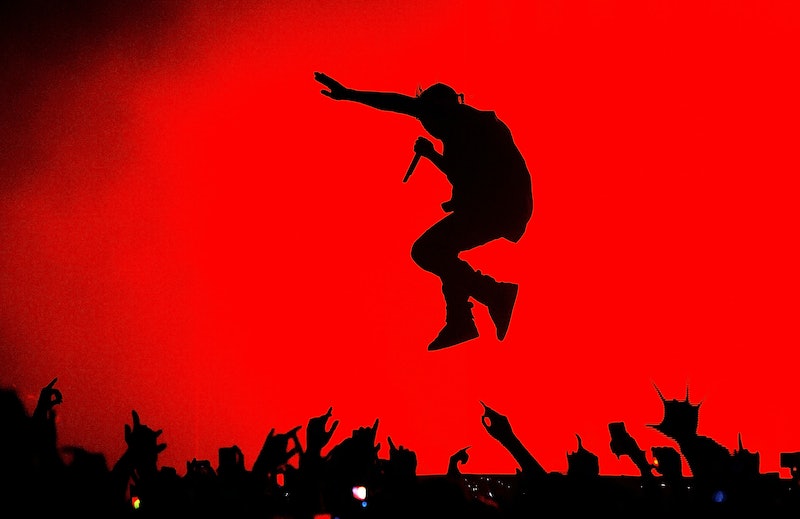 What's the word on Yeezus today? Kanye West has responded to the media blast he faced after he told an audience member to "stand up" at a show in Sydney, Australia over the weekend. It wouldn't have been so horrible, had the fan not been a wheelchair user. On Monday, video surfaced of West at a show in Brisbane delivering a five minute invective against the media criticism he received, demanding that the media direct their attention elsewhere: "Pick a new target. Pick a new target. Because I’m not one of these dumb ass artists that you’re used to. You come at me, I’m going to take my platform and break this shit down for real, intelligent people every night."

Though his speech did have some salient points — he brings up that there are bigger issues plaguing the nation, like war and the Michael Brown shooting — overall, West played blameless victim to a media firestorm that he felt was unwarranted. Instead, he should have acknowledged that his comments were insensitive, even if he didn't agree with the media's reaction.

West's speech didn't even touch on the incident in Sydney, besides telling the audience to replay the video and they would see that it was being misconstrued. Rather than own up to the incident, he took a different turn, repeating that he is a "married Christian man with a family" and a "true artist." Though those two facts may be empirically true, the critics of West's offense toward the wheelchair user didn't at all deny his artistry nor dedication to his family.

West said he was being "demonized," but the fact remains that he wanted everyone to get out of their seats unless they had a could "prove" that they were handicapped. Disability groups in Australia were outraged by West's comments; as Craig Wallace from the foundation People With Disability Australia said, "To call out people for not standing up, when they are disabled and cannot stand up, in front of thousands of people, is humiliating ... Asking disabled people to show their handicap pass is patronizing and inappropriate."

That's what rubs me the wrong way about the incident — I get that West is quick to go on the defensive of the, because in some instances, his actions have certainly been sensationalized, and in others, he was the victim of crass, inappropriate mocking, namely Jimmy Kimmel infantilizing West on his show. But it's frustrating when West does something clearly inappropriate and offensive and can't recognize the error of his ways; even if he didn't intend to offend, intent doesn't matter when discrimination occurs. West instead took the criticism as a personal attack on his home life and his career, and making himself a victim further minimizes the damage done.