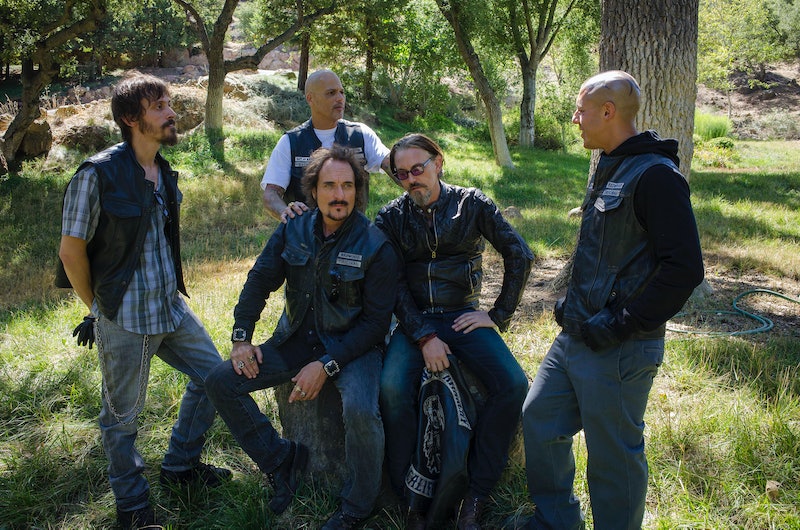 So far, the seventh and final season of Sons of Anarchy has set ratings records for FX. But for those looking to jump on the motorcycle-gang-yarn-turned-sprawling-tale-of-urban-crime-bandwagon now, only Seasons 1 through 5 are available on Netflix Instant. The good news is that Season 6 of SoA should be on its way to Netflix in just a few months. As long as Netflix hasn't changed its mode of operation, we can probably expect the sixth season to appear on Netflix at the end of October, around the same time the last few seasons were added to the site. SoA Season 5 was added on October 26, just under two months after Season 6 premiered on September 10. Since Season 7 just started on September 9, I'm calling it: by this Halloween everyone will (and should!) be caught up on Sons of Anarchy.

FX is one of the best cable networks for those of us who don't have cable/don't remember to set the DVR to record every week, because they make almost all of their shows available on Netflix streaming and usually do so right around the time when the next season is premiering — tailormade for binge watching sans commercials. They also provide pretty consistently great television made by exciting people (ahem, Fargo).

And while it feels like the majority of the inhibitable Earth has a Netflix account, if you're an Amazon Prime-r (still working on that nickname), then you'll be eligible to catch up on SOA. However, there may be a little longer to wait. While the entire season is currently available for purchase, they haven't announced when it's going to be added to their Prime-eligible Instant catalog. The only way you're out of luck is if you're a Hulu Plus-hie, which doesn't have access to Sons of Anarchy and is also a distant third in terms of streaming sites.

So if you're itching to get caught up, you have a good deal of options. And you'll want to get caught up, because Season 6 changed just about everything for the Tellers, and the finale had some absolutely insane revelations and some brutal, heart and bone breaking violence. Gemma, Juice, and Jax have all made decisions that have sent them in very different directions, and jumping in at the Season 7 premiere, before seeing how their relationships withered and weakened in Season 6 won't have the same effect.

Because of that, it would be useless to jump in without catching up, even if it's just by reading episodic recaps while waiting for Netflix to update in October. The biggest strength in Sons of Anarchy is how it mixes the serialized plot development with equally serialized emotional development, so even a new fan will want to keep an eye online to eventually get the complete picture.

More like this
8 LGBTQ+ TV Shows & Movies Like 'Heartstopper' To Watch On Netflix
By Alyssa Lapid
What’s New On Netflix: A Victoria Justice Rom-Com & The Return Of David Letterman
By Arya Roshanian
What’s New On Netflix: The Return Of 'Bling Empire' & A Rebel Wilson Comedy
By Arya Roshanian
Netflix Just Revealed When 'Never Have I Ever' Seasons 3 Will Premiere
By Gretchen Smail and Alyssa Lapid
Get Even More From Bustle — Sign Up For The Newsletter