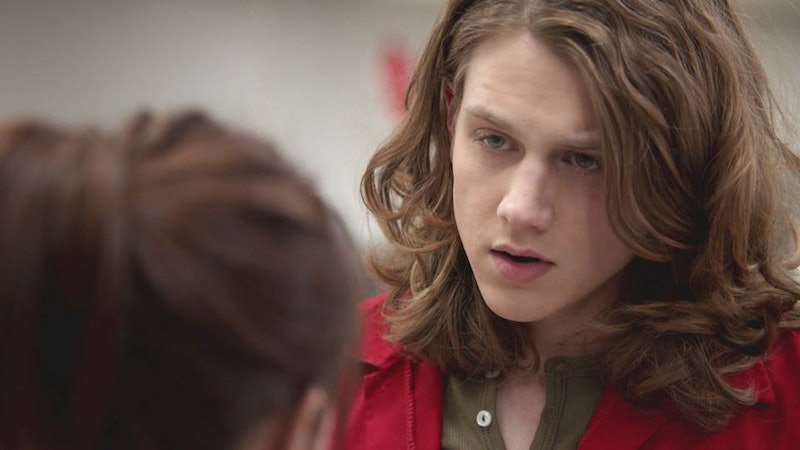 This cannot be happening — someone pinch me now so I can wake up from this absolute nightmare. The Finding Carter Season 1 finale turned Max into a total jerk (which I totally blame Crash for, by the way), ended Maxlor, and set up the possibility that Max won't appear in Finding Carter Season 2. That would be totally unacceptable, because Finding Carter needs Max almost as much as it needs Carter — if not more. And this show is about her. I know, we should be thankful that when Crash shot Max on the show, he didn't kill him, because at least now we know that Max can always come back. But could there be a Finding Carter without Max being the world's dreamiest boyfriend and the reason why croutons are relevant again? Absolutely not.

On Tuesday night's Finding Carter finale, fans finally saw Max fully awake but he was far from OK. Yes, he was alright physically, but as far as his mental state, he was not good at all. (Thanks, Crash, you asshole.) Apparently, unlike the rest of the things in his life, Max isn't taking getting shot in stride and unfortunately, he took that out on Taylor. Kind, sweet, innocent Max was turned into an emotional monster and it was heartbreaking to watch — almost as heartbreaking as watching Maxlor break up because Max needs to go home to his parents to heal, and he wants Taylor to go on with her life. I know what you're thinking, "MAX CAN'T LEAVE — I LOVE HIM," and I totally feel you on that.

I'm just going to say it right now, Finding Carter needs Max. And all of the show's fans — myself included — need Max. He's just an amazing character whose story touches and engages with so many other characters on the show that it'd ruin everything if Max just suddenly disappeared. But also because he's got great hair and he's the boyfriend you wish you'd had in high school.

Looking back at Season 1, Max served as a huge bridge between Carter and Taylor. He helped Carter to really see that she could have a life with the Wilsons and Carter's first, truly sisterly moment with Taylor came when she was giving her advice about having sex for the first time with Max. (I know, really awkward, but we have to take it for what it was.) And at the same time as he was helping Carter, Max was helping Taylor to let loose with someone that made her feel safe to be herself. Well, and someone who shared her love for crouton-making. Max drove Carter and Taylor's storylines forward, even in the penultimate episode where they fought over who deserved to be with him in his time of need.

But it's not just Carter and Taylor that Max's storyline has touched — he also developed a relationship with Grant and the rest of the Wilson family. His relationship with Grant in particular, however, is something that Finding Carter needs to keep going as well. Because Grant really needs something good in his life and having an older brother figure would do him wonders, considering how disappointin his father is. Basically, the Wilsons need Max and it's that simple.

With Carter gone at the beginning of Season 2, it'll be as important of a time as ever for Max. First, he knew Carter when she was still Lori's daughter and he also knew Lori, so he'll become a valuable source for predicting where Carter might be. But he'll also be important to Taylor and Grant as they navigate the difficult situation they've found themselves back in. Max might have great hair and be a total dreamboat, but he's also just downright great person that'll go above and beyond for Grant and Taylor while they go through Carter's kidnapping for a second time. And that's immensely important.

Oh, and also, what's a world without croutons and houseplants. Right, people?