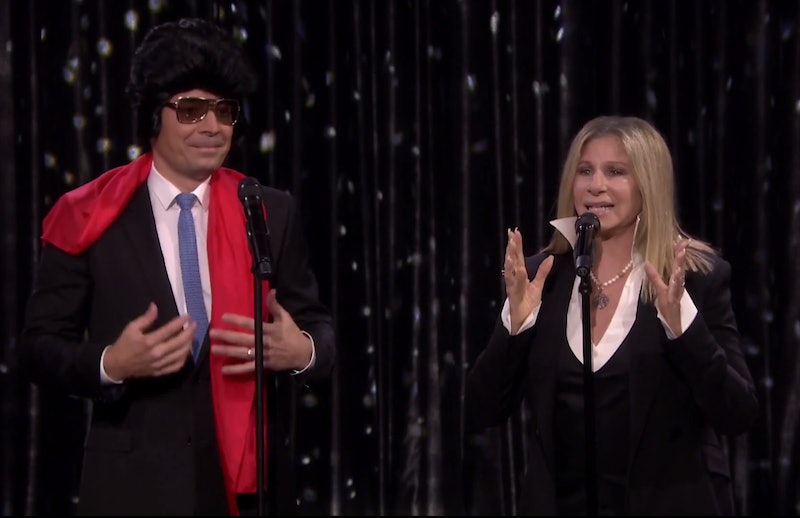 Listen, I'm not saying that Jimmy Fallon should try to make it as a singer-songwriter, but isn't some kind of medley of his greatest Tonight Show hits is in order by now? He did it for Late Night and now I'm waiting for him to do it for the Tonight Show. Expectations were high when Fallon revealed Barbra Streisand would be on the Tonight Show, her first late-night talk show guest appearance in 50 years, and Streisand more than rose to the occasion. Among the many highlights and revelations during her interview with Fallon, there was nothing more awesome than the medley of songs Fallon and Streisand did from her album Partners. Mainly because Fallon wasn't singing as Fallon, but as a knock-off replacement for Blake Shelton, Michael Buble, and Elvis Presley.

Streisand's Partners is a duet album that features her singing with a number of fellow celebrity partners. Since one of them was unavailable, one of them was on tour, and one of them has been dead for years, Fallon was more than happy to fill in for them with a little voice change and costume magic. His Elvis impression was... questionable, at best, but Fallon did a surprisingly good Shelton impression that even Streisand had to compliment him on. The resulting sequence will literally make your whole morning.

I mean, unless you're a huge fan of Elvis. Then you might find yourself cringing as Fallon's barely-there impression that's more like a collection of stereotypes about the King than any real attempt to emulate Elvis in any way. Then again, if you were looking for an accurate Elvis impression then you probably wouldn't look to The Tonight Show with Jimmy Fallon before you looked anywhere else.

Check out the performance below.