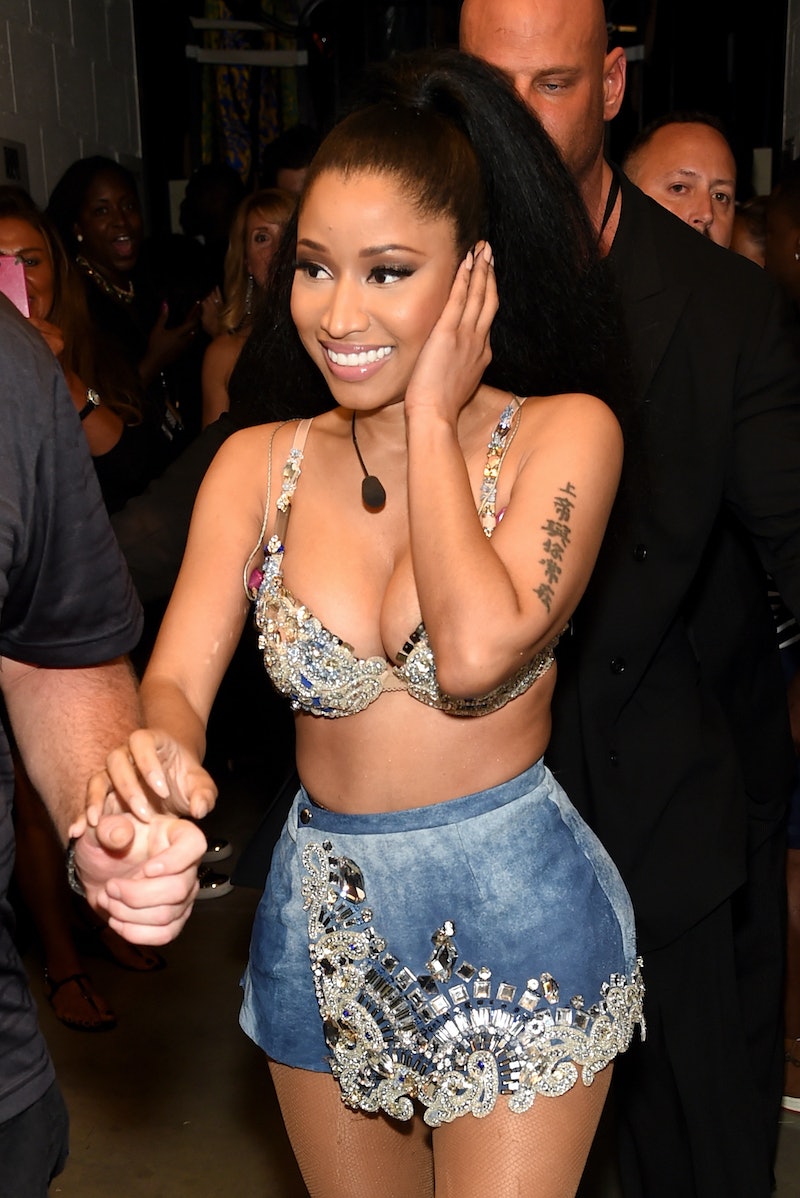 Monday night, Nicki Minaj stepped out in Paris wearing one of her most, um, show-stopping ensembles as of late. Nicki Minaj wore a bright green, cropped turtleneck and matching pants from Alexander Wang. It was a statement on its own, with no need for jewelry or accessories — just Minaj, her long, black ponytail and her bangin' curves. And as evidenced by social media, the Anaconda superstar was feeling her ensemble. She uploaded not one, but four Instagram photos of herself in it, in a matter of one hour.

It is no secret that Minaj is a huge fan of Alexander Wang. Just last week, she stopped by the designer's show to teach his models a thing or two backstage. By the way, it was all documented on Vogue's vine and if you haven't seen it, you should definitely put aside a few minutes and watch it. You won't regret it.

In the videos, Minaj was wearing as similar outfit consisting of a body-con-style cropped top and matching skirt, which I assume is from the designer himself, too. But just when you thought it couldn't get sexier than that, she proved you wrong with this almost NSFW green outfit.

It's unclear whether these particular pieces are available to shop or if they were custom-made for Nicki Minaj, but one thing's for sure: I'm not sure how I feel about it. A part of me cringes, feeling like I can't take Minaj seriously in this Gumby-inspired green suit, while the other part of me wants to applaud her for being so bold and fashion-forward.

A piece of me wonders whether her under-boobs get chilly as she two-steps on the dance floor, while the other half wishes I could rock my bod as confidently as she does. Her Instagram followers also had some thoughts on the green get-up — all four photos garnered over 14,000 comments. @rolltide1034 chimed in, saying "she looks like Alvin the Chipmunk," while @j_2smoove said, "You killing that fit!" But it's apparent, as she bounced around in the Parisian club, that Minaj could care less about what I or anyone thinks about her outfit. And that is yet another reason to love her.