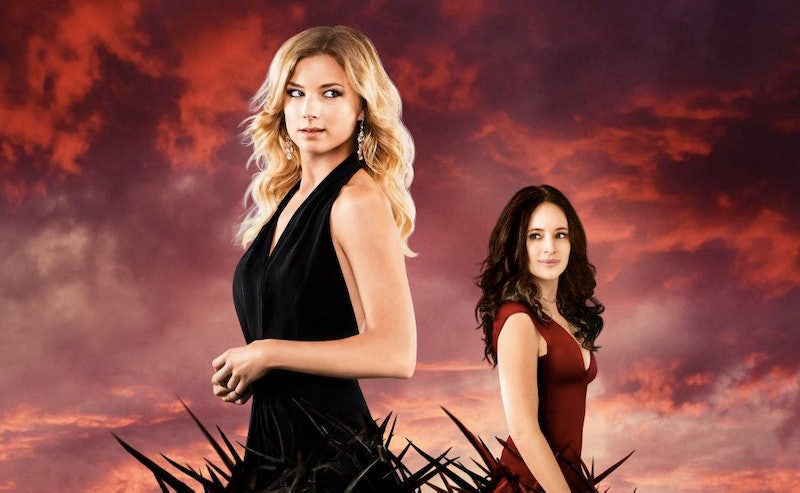 What goes around comes around. That’s the latest tagline that can be found on the Revenge Season 4 poster, which to me is very telling indeed. For three whole seasons now, fans have watched with bated breath as Emily Thorne (aka the real Amanda Clarke) sought vengeance on those who played a hand in her father’s death, one single crossed-off red “X” at a time. There’s been a lot of scheming and more death than we can count (RIP Fake Amanda), but after years and years of plotting the Season 3 finale of Revenge culminated in Emily finally accomplishing everything she worked so hard for: getting revenge on the Graysons.

Think about it… Victoria is locked away in a mental institution; Conrad has been stabbed — possibly to death — by Emily’s not-so-dead father, David Clarke; and Daniel… well, he's dealing with his own unique set of problems that come with finding a dead ODed girl in your bed. So yeah, I’d say Emily’s mission feels very much accomplished. Of course, logically this begs the question — where does the show go from here? Some have wondered if this potentially means Revenge will end after Season 4, while others think that it may signify Emily’s eventual death. However, there are others (like me), who believe that it’s looking to pave the way for Victoria to become the new Emily Thorne.

I mean, the season hasn’t even started yet and already there are a ton of signs that these two characters have pulled a Freak Friday. Take the aforementioned Season 4 poster, for example.

Not only does that whole tagline have a very karma-like feel to it (almost hinting as though Emily’s about to get a taste of her own medicine), but the fact that Victoria is even shown in the poster at all signifies a major shift in the entire series. For the past three seasons, Emily has stood alone in these images, so to now bring a very smug looking Victoria into the picture tells me that she’s going to play a much bigger role than ever before. And just look at how she’s dressed. Either her and Emily are shopping at the same thorny dress store or the writers are trying to tell us something. They want us to get the point, literally.

Even the red sky could be filled with hidden meanings. Perhaps it’s implying that the sun is now setting on Emily’s reigning Revengenda. Or maybe it stands for the dawning on a new day or Victoria’s rise to retribution. And just in case that wasn’t enough, the Revenge Season 4 promo used Victoria as the voiceover instead of Emily. And she does not sound happy…

But the way I see it, this could end up being the refreshing twist this show needs, and here’s why:

Victoria’s Wrath Will Be Epic

We’ve already seen what Victoria can do when she feels backed into a corner (i.e. doping Aiden with a paralyzing toxin before smothering him to death). Just imagine the crazy things she’ll do once she gets the hang of this whole revenge business. Already she seems like a natural.

The Show Would Have a New & Exciting Purpose

It’s been fun watching Emily get back at all of her dad’s wrongdoers, but the series had a tendencies to shift gears every so often, like with that terrible Initiative side story. Sure, it was probably done to try and mix things up a bit, but it just ended up falling flat. Having a new vendetta on the scene will help restore the show’s focus and reestablish the overall “revenge” concept.

Chances are that if Victoria really is out for revenge, she’s not going to just want to come out and spring the truth on everyone concerning Emily’s true identity as Amanda Clarke. (I mean, she tried that tactic at first and it didn't exactly turn out so well.) Now that she's had time to calm down and think things through, I'm sure she’ll want to make Emily suffer slowly. And while that should certainly still give Emily cause for concern, at least that means her secrets will remain safe from those who don’t yet know the truth… at least for the time being.

There’s No Such Thing As Too Much Victoria

Case in point. Consider yourself warned, Emily. She's coming for you…