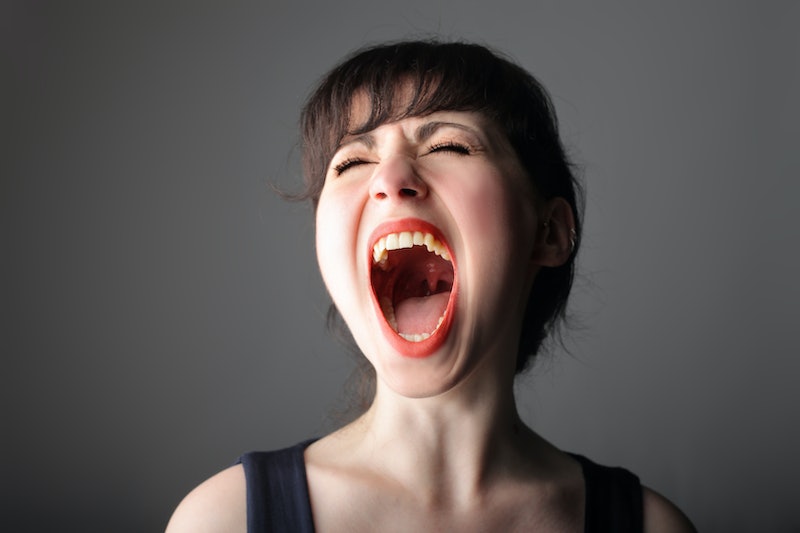 When I was 25 years old, I was living in Boston in my girlfriend’s house, and I’d just started going to therapy for the first time. I’d found a therapist through my company’s employee assistance program. There was a confidential questionnaire you filled out online, and I’d answered yes, uncharacteristically, to a couple of questions along the lines of, “Are you so angry you could scream? Do you feel like you could fly into a rage at any moment?” I’d listed my boss (a jerk) and my girlfriend as the sources of my frustration, but even then I knew that my real beef was with my girlfriend and that I needed to talk to someone before I got myself fired.

The therapist I was referred to was a cool, smart woman around my mom’s age, and I felt instantly safe with her. At our first visit, she asked me the usual intake-type of questions — whether the members of my family of origin were living and if I felt close to them, how often I drank and did drugs, whether there was a family history of addiction or abuse, questions about my sexuality. We more or less breezed through these. But after I spent some minutes parsing out whether my girlfriend was “violent,” she told me in the calmest way possible that my relationship had some “controlling aspects” to it. It was like a light went on in a cold and scary dungeon where I’d been living for too long.

She’d been told that she had an anger management problem, and I told her that she didn’t. I felt it was my job to side with her.

My girlfriend never hurt me physically, but she lashed out at people and things. She threw stuff — books, plates, shoes, a hammer — never at me, but sometimes perilously close. Her road rage was so fierce that we often had to turn around before we made it where we were going. She’d been told that she had an anger management problem, and I told her that she didn’t. I felt it was my job to side with her. These people just didn’t get her, didn’t understand what she was up against in life. They didn’t know her like I did, how soft she could be, how much pain she was in. Of course, I was the last person to know what an anger management problem looked like, despite the fact that I was beginning to develop one myself. On the surface I was calm, but underneath I was slowly coming to a boil.

Up until then, I’d felt responsible for everyone — my girlfriend, my boss, my mom (always my mom)

Then the therapist recommended I read The Dance of Anger by Harriet Lerner, Ph.D.

The title is, perhaps, a bit cheesy, but I didn’t notice this right away. I hid the book because I was afraid of my girlfriend discovering that I was angry, not because I was embarrassed to be reading a self-help book. I watched Oprah. I read Iyanla. I was cool with self-help.

The book debuted in 1985 and is celebrating a major milestone this year, with 3 million copies sold. Lerner’s subject is anger, especially women’s anger, and she concerns herself with various patterns for managing it.

The first time I read it, I remember doing massive amounts of underlining. I would find myself nodding along a lot. Other times I’d feel small and quiet, and I’d cover my mouth liked I’d just seen a mouse.

there were “nice ladies” and “bitches,” and my problem was I was a nice lady.

In the book, I encountered for the first time the concept that a person could only be responsible for herself. I was — or I should say — I am a classic people pleaser. Up until then, I’d felt responsible for everyone — my girlfriend, my boss, my mom (always my mom), my best friend, my other best friend, my girlfriend’s cats to whom I was allergic, coworkers I didn’t like and whose feelings I didn’t want to offend, people who bored me but I was afraid of them finding out, all the people who’d given my girlfriend her abandonment issues, the world who’d wronged her. I was at that point in my life 100 percent reactive, and it was a pretty terrifying idea that I should be responsible for myself, because I didn’t actually know what I, in a vacuum, wanted or aspired to.

I also remember that there were “nice ladies” and “bitches,” and my problem was I was a nice lady.

I used to read this book about once a year, as a sort of inoculation against forgetting how bad things could get with me if I didn’t acknowledge my own anger, but eventually I stopped.

A couple weeks ago, my best friend and I were talking about the book again, and I realized it had probably been a dozen years since I’d read it the last time. Feeling flush with nostalgia, I went looking for my copy of The Dance of Anger on my bookshelves.

I couldn’t find it. I was a little bit thrilled by this fact.

In the years of living in a tiny apartment in Brooklyn with my husband and our daughter, we’d been through a number of spatially necessary book purges, the kind where you have to make some really tough decisions — like whether you’re going to keep the entire Hunger Games trilogy or just the first book, because after that Katniss is kind of a drag — and I’d considered getting rid of The Dance of Anger several times. So when I couldn’t find it, I took it as a good and healthy sign that I’d finally let it go. It turned out that I hadn’t given away — my best friend reminded me that I’d loaned it to him, but now it was in storage in Mill Valley, California.

So I had to buy a new copy this month, the 2014 edition, and I learned something: I still needed it. In these days of #WhyILeft and #WhyIStayed Twitter confessions, I’m grateful not to be trapped in a damaging relationship anymore. In fact, romantically, I’m doing pretty great. My husband and I have learned the steps to our own little anger routine, and it works for us. There are no fireworks. No tears and recriminations. No gesticulating monkey arms. One time, on vacation as new parents, when he’d slept in all the mornings and I’d slept in none, I tried shouting at him about it. I just felt silly. We aren’t shouters — not because we don’t get angry; we just understand each other better when we talk things through.

But now, as a full-fledged adult with older parents and a young daughter, my heart feels vulnerable in a whole new set of ways. I found myself nodding along again as I was reading, clutching my chest and taking deep breaths and hoping to do better, recommitting myself to the work of getting clarity on my feelings and expressing them in calm and nonreactive ways. So I thank Harriet Lerner, Ph.D., for teaching me, once and again, how to dance.

More like this
20 Things You Should Never Tolerate In A Relationship
By Rachel Sanoff and Kathleen Ferraro
12 Ways You're Sabotaging Your Love Life
By Teresa Newsome and Lexi Inks
The Best Time To Date After A Breakup, According To Experts
By Bustle Editors
Josh Peck Shows Love To Jennette McCurdy After Her Shocking 'iCarly' Revelations
By Radhika Menon
Get Even More From Bustle — Sign Up For The Newsletter