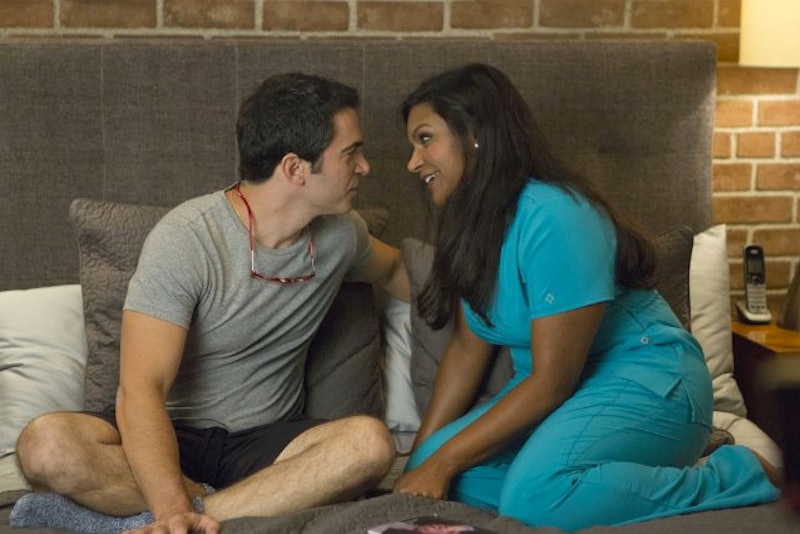 After much fanfare — including about a week of super well-dressed talk show appearances by showrunner/star Mindy Kaling, all faithfully documented on her just-shy-of-a-million-followers Instagram account — The Mindy Project finally had its premiere last night. The episode, titled "We're A Couple Now, Haters" (fun fact: according to — you guessed it — Mindy's Instagram, it was originally called "We're A Couple Now, Bitches" which is kind of cooler, but probably not so cool in the eyes of network TV censors) had its ups and downs, but it in general, it boded very well for the half-season ahead. After all, I don't think anyone could find it in their hearts to dislike "Diamond Dan's" episode-closing strip-tease (set, of course, to Lenny Kravitz's "American Woman"). And okay, if somehow you didn't get a kick out of that whole routine? Well watching him tentatively plink out the opening strains to Frozen's "Let It Go" on his baby grand must've gotten to you.

Anyway, we got to an auspicious start on the style side of things, too: fashion's always been an integral part of The Mindy Project, and "We're A Couple Now, Haters" definitely delivered, serving up a veritable half-dozen of Mindy-approved duds. Let's take a look at some of her best outfits!

I know double negatives are a no-no (literally?), but I will never not love houndstooth. It makes me happy that Mindy wears it with so much aplomb!

Serving up '60s side ponytail fierceness, no?

This jewel-covered bustier-topped cocktail dress has to be the best of the week. It looks like it weighs about a million pounds, it reportedly cost over $5,000, and it's just plain awesome. And hey — IMHO, it looked even better with a ombre librarian specs and a slouchy Comme de Garcons cardigan layered on top!

Heck, layer Diamond Dan on top of that, and you've really got yourself a winner.

More like this
Iris Law's Skunk Mullet Is Not For The Faint-Hearted
By Tomi Otekunrin
The Best 2000s Outfits from High School Musical
By Avery Matera and Dominique Norman
Machine Gun Kelly Wore A $30K Diamond Mani To The BBMAs
By Paris Giles
How To Master Baby Braids, According To TikTok
By Tomi Otekunrin
Get Even More From Bustle — Sign Up For The Newsletter