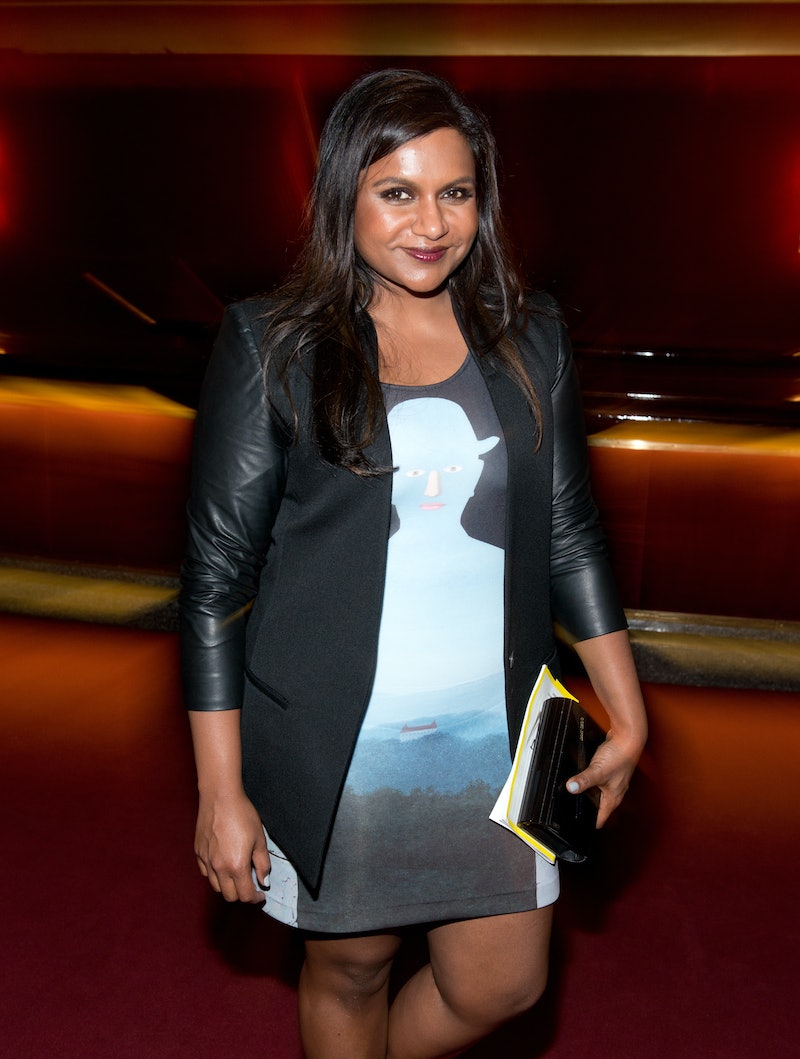 Okay, it's officially T-1 days until The Mindy Project has its season 3 premiere! I've been running something of an unofficial countdown for the show, as related to Mindy's fashion outings over the past month or so. First, we had her unveiling of Dr. Lahiri's first-episode duds, then we got last week's teasing IG of all of the fancy-schmancy designer shoes to be donned this week, and finally today? We get all the outfits that go with the aforementioned fancy-pants shoes! Oh, and there was also her bombshell-esque Emmy Kenzo gown, but that's sadly un TMP-related (still not over that multi-category Emmy snub, by the way).

Anyway, back to the task at hand: Mindy's supremely well-dressed promotional circuit! She's been promoting the show in true Mindy Lahiri-approved style, surely wearing enough brights to keep her on-screen alter ego happy. She's worn a whole delicious melange of looks, donning tuxedo-y blouses, turquoise statement (like, statement-statement) earrings with equally statement-y hot pink dresses, and a whole slew of gorgeous designer wares on just about every talk show, from Howard Stern to The Late Show to Watch What Happens Live!: so let's take a look!

At The Today Show in Miu Miu

Petition here for Mindy to be the next face of Miu Miu.

On Live! With Kelly and Michael in Trina Turk

Statement shoes to go with the statement earrings (also, Mindy should always wear that shade of pink).

Oh, and she has the best descriptions of her style anywhere: "Going for a basketball wives vibe."

On Letterman in Lela Rose

On Watch What Happens Live!

Not sure of the designer here, but it's a well-deployed LBD look (especially with the high impact eyes and pink lippy), and that is some A+ mugging for the camera all around.

On The Howard Stern Show in Bella Freud

Kaling doesn't do menswear-inspired as often as her titular character (I'm still not over that Annie Hall- esque custom-made tweed suit from the season 2 finale), but she does it with just as much aplomb.

At An AOL Chat

No one does bejeweled better than Kaling.

All those looks in the span of about four days? Every week should be The Mindy Project's premiere week!