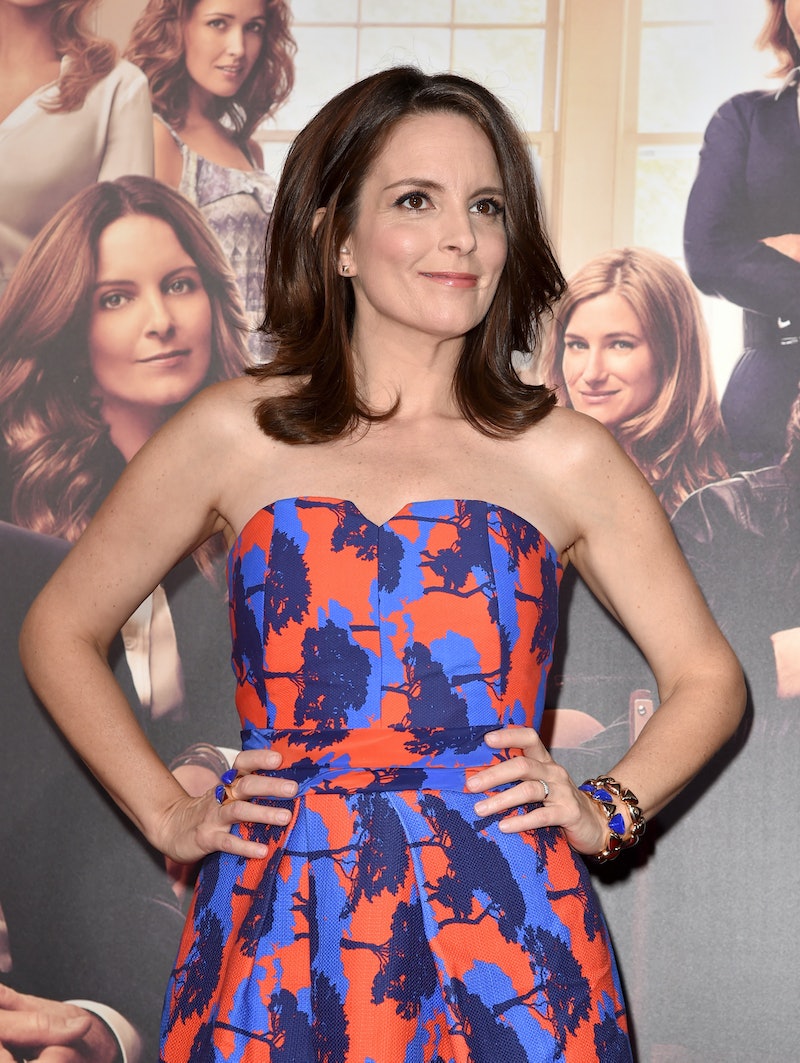 When you're one of the funniest women in Hollywood/alive, people have a tendency to focus on nothing but your hilarious jokes and side-splitting stand-up. While that's totally understandable in the case of Saturday Night Live legend, former 30 Rock actress, and best-selling author Tina Fey, there's something else she should be recognized for: her ever-more-impressive sense of red carpet style. And nowhere has that been more evident than at Tina Fey's This Is Where I Leave You premiere appearances over the last several days.

From the 2014 Toronto International Film Festival (TIFF) and the Tribeca Film Institute in New York City to the glamorous red carpets of Hollywood, the Golden Globes host has been looking more high fashion than ever in her pretty printed frocks and classic tailored dresses — proving once and for all that we should take her just as seriously in the style department as we do in the talent department.

Starting off her latest red-carpet run at TIFF's annual film fest, Fey showed off her flawlessly elegant side in a midi-length, cap-sleeved, fit-and-flare dress by designer Christian Siriano — a look that was slightly elevated thanks to the dress's textured fabric and her simple strappy sandals.

The star then went on to rock another dress at a TIFF press conference in the same silhouette — but this time it was made even more gorgeous with a V-neck cut, a stunning deep blue hue, and a tiny black belt that made Fey's waist look about this big.

Traveling to the Big Apple for a special screening of This Is Where I Leave You at the Tribeca Film Institute Annual Benefit Gala, Fey chose a colorblocked Rupert Sanderson sheath dress, featuring crisp white paneling and a classic black-and-white pattern (all made cuter by her charming curls and flawless red lip).

Finishing up the week in what could be the best look of them all, Fey hit the Hollywood premiere in a strapless Osman dress featuring the slightest sweetheart neckline, an asymmetrical hem, and a bold, brightly colored tree print.

Complementing the look with soft waves, a neutral lip, and cobalt blue heels, Fey looked fun, flirty, and undeniably sophisticated all at once — just the way I like her.

More like this
A Comprehensive Look At Blake Lively’s Glamorous Style
By Allie Fasanella
Iris Law's Skunk Mullet Is Not For The Faint-Hearted
By Tomi Otekunrin
Machine Gun Kelly Wore A $30K Diamond Mani To The BBMAs
By Paris Giles
How To Master Baby Braids, According To TikTok
By Tomi Otekunrin
Get Even More From Bustle — Sign Up For The Newsletter