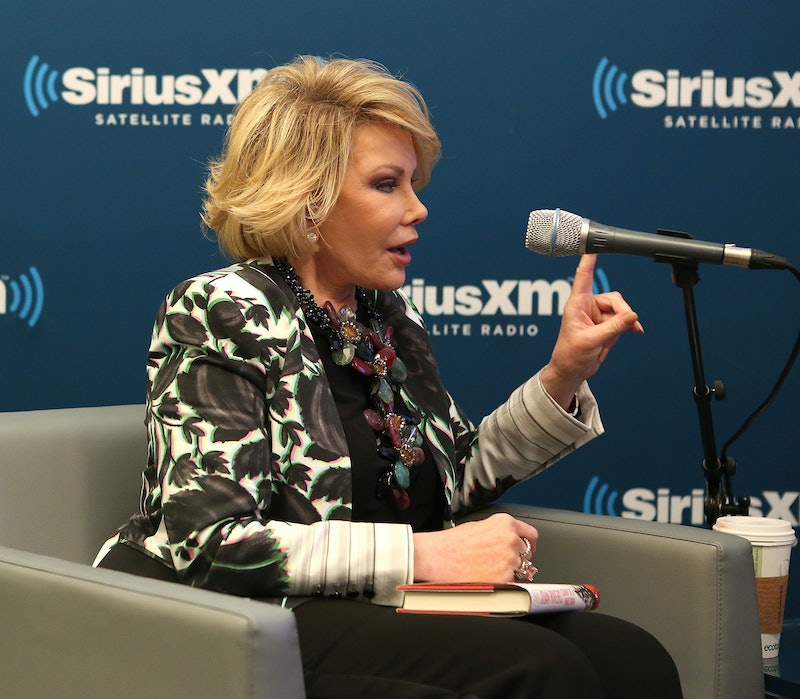 Although this has absolutely nothing to do with whether or not the Yorkville Endoscopy Clinic is in any way culpable in Joan Rivers' tragic death, it's the kind of thing that you just hope fervently isn't true from the get-go. The clinic is currently under fire from grieving fans as law officials investigate the throat procedure Rivers was undergoing when she suddenly stopped breathing and had to be transferred to the hospital. Rivers tragically passed away not long after that and her autopsy was inconclusive. New details have come to light, alleging that Rivers' doctor took a selfie with her while she was unconscious, and this is the most insane story yet.

It's the kind of story that's just crazy enough that you're automatically inclined to believe it. After all, who would claim something like that if it wasn't true? It's not like it's believable. According to US Weekly, it was an unidentified staff member who revealed that "the doctor also took a selfie in the procedure room with Rivers while she was under anesthesia." This comes after the allegations that Rivers stopped breathing after an unscheduled biopsy was done on her during her routine throat procedure, and it's not painting a particularly good picture of the clinic.

I'm not saying it's not possible. I mean, doctors are people too, and how many chances is the average doctor going to get to give a timeless celebrity like Rivers medical help? However, the sheer wrongness of such a massive level of invasiveness — as a general rule, you shouldn't take pictures of people when they're unconscious and especially when they're in a hospital — makes it hard to focus on anything else. Again, this doesn't particularly have anything to do with whether or not Yorkville Endoscopy can accept the blame for the medical complications that led to Rivers' death, but it's the exact kind of negative press that they really don't need right now.

In fact, it goes beyond negative press and straight into "what the hell?" territory. If there's a slight risk that your doctor might take a photo with you after you've gone under, then it's doubtful that anyone, famous or not, is going to want to go to Yorkville Endoscopy in the future. On the one hand, that could be the whole point of this story coming now. Even if Yorkville is ultimately cleared of suspicion, they'll still always be known as the clinic where Rivers spent her last conscious moments. At this point, can their reputation really get any lower than that?

But if this story is true, then again all I can say is what the hell? In what world, in what corner of a medical practitioner's mind, would something like that ever possibly be okay to do? It doesn't matter if the doctor in question didn't think it would get out; what matters is that's an action that someone actually thought was acceptable. I know that we all believe we have an imaginary right to celebrities and their lives because they're famous and build a career off being faux-accessible, but there's a difference between that and this disgusting act. Hopefully, it's just another crazy rumor.