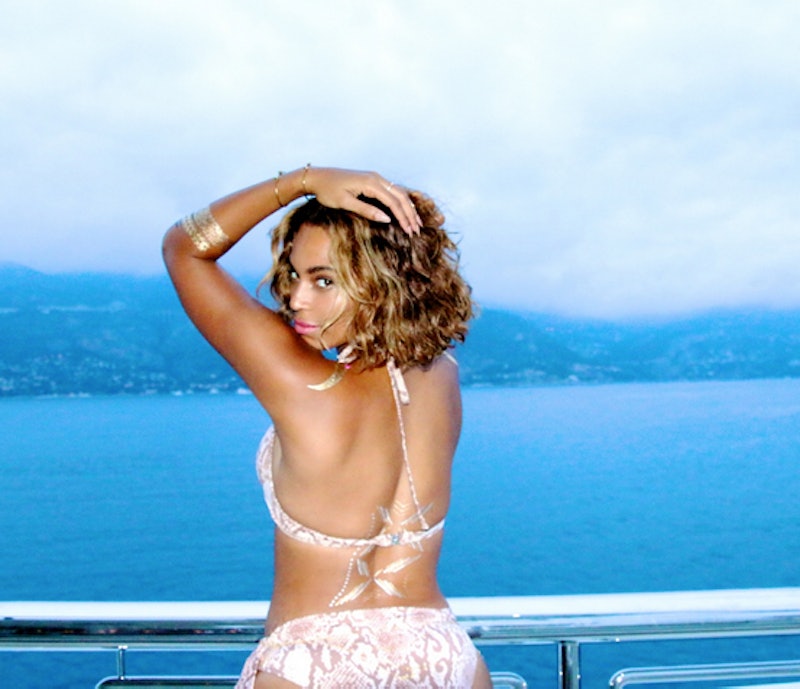 Two weeks ago, modern American royalty and part time goddess Beyoncé Knowles celebrated her 33rd birthday. This event was so momentous that happy fans trended #BeyDay on Twitter in honor of her special day. It later got out that Jay Z and Beyoncé had gone on vacation to Corsica, Italy in order to celebrate her birthday with something a little more special than the admittedly adorable video montage of Beyoncé that Jay Z released because they're obviously in love. Drunk in love, even. While I tried my hand at speculating about how their Corsica trip could have gone, my sorry guesses didn't compare to the real thing when Beyoncé posted pictures from her Italian vacation onto her personal website.

However, while the pictures were all totally cute and fun, I couldn't help but notice that for an international superstar, Beyoncé sure did a lot of typical things on vacation that you would expect pretty much anyone going on vacation to do — except better. Every time I saw a picture that made me think, "Beyoncé's just like me," I saw another picture that made me think, "God, I wish I was Beyoncé." Sure, I have that feeling more or less all the time, but these pictures were particularly good at highlighting the difference between the last time you took a beach vacation and Beyoncé's beach vacation.

So here is every time Beyoncé's vacation was just like yours, but better.

She Lounged on the Beach...

Nothing says awesome vacation like laying around on the beach knowing you have nowhere to go for hours and hours, am I right? So relatable.

...That Had Her Name Written On It.

Yes. Well. If I could name my birthday after myself then I would do that, too.

She Spent Time With Her Husband...

So cute. So not divorced.

...And They're Both Richer Than You.

I mean, last time I spent time with my imaginary husband, we weren't in Corsica. That kind of trip requires special planning and saved funds when you're not Jay Z and Beyoncé.

She Bought a Cute Swim Suit...

...But Wears It Better Than You.

Dear universe, can I please look like this in a bikini with absolutely no diet or exercise effort? Please and thank you.

She Ate All The Things...

Are you starving? Because I'm starving. And that all looks so tasty and affordable.

The fact Google tells me that a good bottle of Corino Barolo wine costs somewhere around $500 kind of ruined my ability to relate to you here, Beyoncé. I mean, I can buy cheap wine for like $20 at the pharmacy.

She Hung Out With Friends...

The only thing better than laying on the beach while on vacation is hanging out with all the friends you never get to see because you all have jobs and lives. Ahh, rest and relaxation.

But the last time I was hanging out with my friends on my own boat was during a really nice dream I had to get up from eventually. Sadface.

She Was the Birthday Girl...

And I'm sure everyone treated her as such. Birthdays are all about getting gifts, money, and special treatment because it is the anniversary of your birth and the one day a year you get to feel like Beyoncé if you're not Beyoncé.

...With a Bedazzled Party Hat.

I mean, when I used to wear party hats, they usually had The Powerpuff Girls or Disney princesses on them, but I guess bedazzling it is one option I never explored.

She Made Sand Castles on the Beach...

That's basically what the sand is there for anyway.

But, sadly, most of us have never gotten to build a sand castle with someone as famous as Blue Ivy Carter. Our lives just aren't that cool.

She Had a Really Good Time...

At least, it looks like she had a really good time.

And we're not. And I'm still sad about it.

More like this
Harry Styles Addresses The Theory That His New Song "Daylight" Is About Taylor Swift
By Jake Viswanath
Joe Alwyn Reacts To Taylor Swift Earning An NYU Doctorate In A Rare Interview
By Jake Viswanath and Nicole Pomarico
Is Megan Fox Pregnant? MGK Gave A Shout-Out To Their “Unborn Child” Onstage
By Hugh McIntyre
Rebekah Vardy & Coleen Rooney’s Trial Has Officially Begun
By Bustle UK
Get Even More From Bustle — Sign Up For The Newsletter