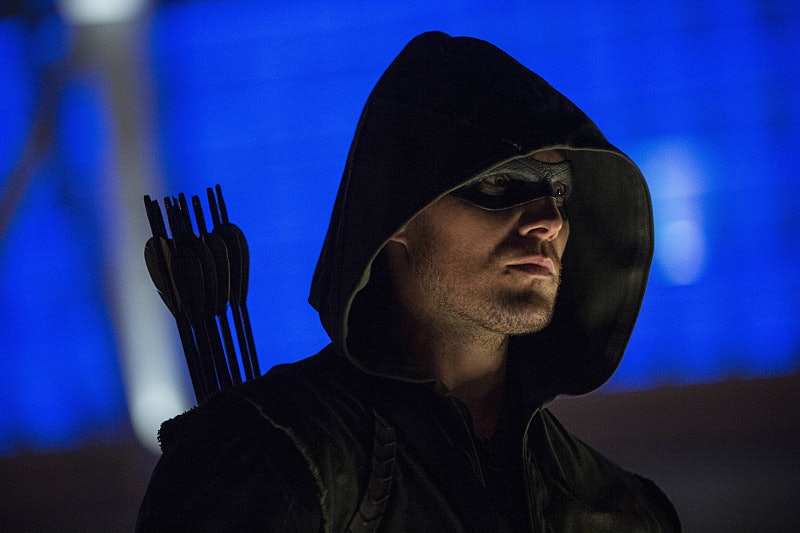 The wait is almost over. Arrow Season 3 will premiere on Oct. 8 — just a few weeks away. But while we all dream of watching Oliver do the salmon ladder with his shirt off over and over again and hope to see Felicity and Oliver together soon, let's take a moment to reflect on the intense awesomeness that have been the last two seasons. For those who have not seen the hit CW show yet, you need to do that immediately. Reading this recap of Season 2 will not help you understand the badassery of this show (though it will be a good start, if I do say so myself). But to explain in a short way, billionaire Oliver Queen is discovered safe and sound and returns to Starling City after his boat sank, his father died, and he was stranded for five years in a scary island worse than Lost in many ways. Though no polar bears on this island, thankfully.

Season 1 made Oliver question his morals and purpose as he returned to become a vigilante against those he and his father believed had "failed this city" and in the process, he lost a best friend. It sounds like a lot, but Season 2 was actually much more intense for Oliver's psyche. The second season tested Oliver's inner and outer strength as well as his faith. So let's go over exactly what happened to Oliver and the Arrow gang before we head into what is sure to be another exciting season of an awesome show. Don't let The CW of it all scare you, fellow adults. It's seriously cool.

Oliver began Season 2 in emotional distress. He had just lost his best friend Tommy and the Glades were desolated by Malcolm Merlyn's earthquake device. He retreats back to the island where we was stranded once before, but Diggle and Felicity call him back when they discover that Queen Consolidated is under threat of takeover by Isabel Rochev (played by the always awesome Summer Glau). Oliver returns and decides to run the company with the help of his ex-stepdad Walter and later teams up with Isabel, not knowing she has ulterior motives. Oliver continues to take down bad guys but realizes that his friend-turned-nemesis from the island has come to Starling City to exact revenge on him. A revenge years in the making.

During this, he also discovers that Sara Lance, the girl he took on the boat with him and his ex-girlfriend Laurel's sister who was thought to be dead, has returned to Starling City to secretly help fight off villains. Oliver knew that Sara was alive as he had encountered her on the island and saved her life over his fellow friend Shado. Shado's death is what turns Slade against Oliver and Sara joins Oliver in his quest to stop Slade. Oliver later discovers that Slade, with the help of Isabel and mayoral candidate Sebastian Blood, has recreated the drug Mirakuru that they discovered on the island. If the drug doesn't kill the person in whom it is injected, it can turn the person into a superhuman soldier only motivated by anger and war. Slade creates an army of Mirakuru men to terrorize the city and kills Oliver's mother Moira.

Finally, after being beaten by Slade and his men over and over, Oliver and the gang (with the help of S.T.A.R Labs) discover a cure for the Mirakuru, inject Slade, and take him down where he is then locked up by the secret organization A.R.G.U.S. In the flashbacks we learn that Oliver, while trying to escape from Slade and rescue Sara, ends up in Hong Kong by season end.

Felicity continues to be Oliver's IT wizard and right-hand man alongside Diggle. She starts to develop feelings for Oliver, though she denies it, but soon meets a young man named Barry Allen (who later becomes The Flash) with whom she becomes quite taken. She even visits him while he is in the hospital in a coma. Felicity is threatened by Oliver's relationship to recently returned ex-girlfriend-turned-current girlfriend Sara, wishes she could help the gang in the field, and believes she is not strong enough to do so.

Felicity also discovers that Thea's real father is not Robert Queen, but in fact Malcolm Merlyn, the man who created the earthquake machine and followed through with the undertaking that destroyed the Glades. She reveals this information to Oliver, who tells his mother that he knows and will never forgive her. Later, Felicity is also the one who works with S.T.A.R. Labs to find a cure for the Mirakuru. She ends the season by being a hero in the field: She is the one who injects Slade with the Mirakuru cure, which allows the team to take him down.

Diggle is still haunted by the death of his brother at the hands of Deadshot and he discovers that his ex-wife Lyla has been kidnapped and he must team up with Deadshot to save her under the orders of the organization A.R.G.U.S. and its leader, Amanda Waller. Deadshot then reveals that he was under contract to kill Diggle's brother by another organization named H.I.V.E. Diggle again must team up with Deadshot and other villains he helped put away in a group called the "Suicide Squad." Most of his journey in Season 2 involves A.R.G.U.S and Amanda Waller, who is sure to play a big role in Season 3.

Thea's boyfriend Roy Harper becomes somewhat of a vigilante himself after the Glades are destroyed. Roy is accidentally injected with Mirakuru and Oliver takes him under his wing to help him with the rage. After a cure is discovered, Roy is injected and again survives, but he stays with Oliver and the gang to take down Slade's men. Malcolm Merlyn returns to Starling City and Thea discovers she is his daughter. She leaves Starling City with him after feeling betrayed by everyone she loves.

So with all of that information swimming in your head, who else can't wait for Season 3 to begin? Oct. 8 is almost here, but still feels so far away.