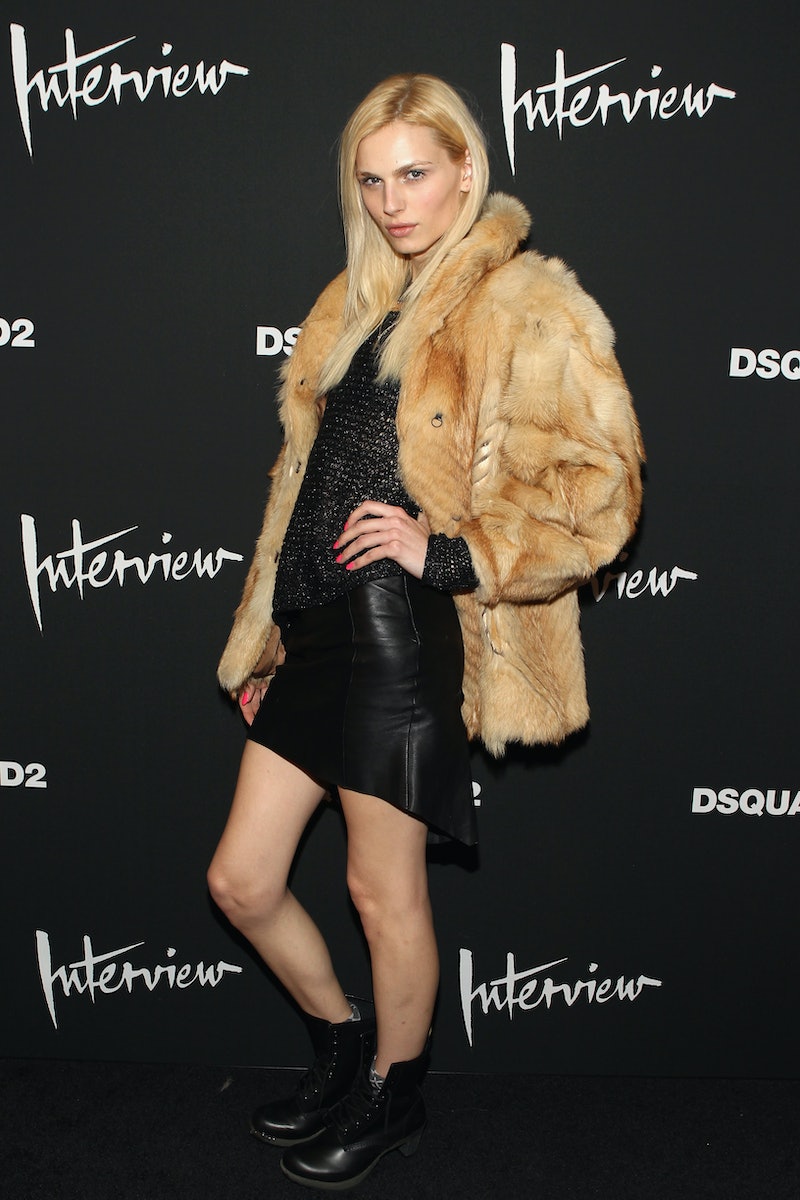 Badass (and beautiful) model Andreja Pejic is the perfect role model. She bravely came out as a transgender woman this past summer, three years after she made her runway debut at Jean Paul Gaultier's Paris fashion show modeling both men's and women's clothing. Now she's continuing her fashion world takeover, all the while staying true to her incredible self. There's even a Kickstarter seeking funding for Andrej(a), a documentary project about Pejic's experience of transition. Long story short, she isn't going anywhere.If you find yourself wanting to know more about this amazing woman, you're in luck! Andreja Pejic opened up during a Reddit AMA on Tuesday.

She answered fan questions over the course of several hours, giving us wonderful insight into both her career and personal life. The Internet can be a rough place, especially for those with identities that many don't understand, and so it was refreshing to see so many thought-provoking and intelligent questions during Pejic's session.

Because of those great questions, we now know so much about the model-turned-activist. I'll cut out my jabbering and present you with the 11 most interesting facts we learned about Andreja Pejic during her Reddit AMA (spoiler alert: you'll want to be her best friend after you read this).

User JaiOhBe asked: "Wanna go out with me? I've got a coupon for the Olive Garden."

But Andreja, what if JaiOhBe has a "Never-Ending Pasta Pass?!"

2. She has an "eyebrow beautician"

"Well I don't mess with them TOO much because bushy eyebrows are very much in right now. I just have a beautician that cleans them up, every month I would say? But it's very minimal. The key is minimal."

3. She loved Barbies as a kid

Pejic's most treasured memory from childhood involved receiving her first Barbie from a neighbor after her mother wouldn't buy her one. This is obviously poignant because Pejic was assigned male at birth and therefore many (rather bigoted, IMHO) people might have thought it inappropriate for her to play with dolls. Um, fuck that.

Pejic describes herself as "attracted to men for the most part." Ladies, there's still some hope!

4. She knew she was female from a young age

Although she publicly identified as androgynous and went by the name Andrej for a long time, Pejic always knew she was a woman.

I mean, i knew I was a woman from a young age. I definitely had fun with androgyny and having a non-binary career, but i knew what my internal truth was. There were definitely difficulties a lot of the time. I wanted to share my identity as a female but I wasn't able to. But I am so lucky, i still managed to do it, I am 23 now, and yeah... I think at the end of the day, you have to live a truthful life and be true to yourself, you have one life and everything has to fall into place around that.

6. She has some very normal hobbies

In her down time, Pejic likes to do what many other 23-year-old women like to do: party, exercise (especially yoga), hang out with friends, and chat on the Internet. Stars, they're just like us!

Surprise, surprise — when Pejic started out a lot of people told her she'd never make it as a model. Turns out they were 100 percent correct... oh, wait. No they weren't.

I definitely doubted being able to have a successful career - when I started, I was always told "You're too specific" "You're too niche" "You'll never make any money" "This isn't something that can work" "No one's had a successful career modeling both menswear and womenswear" so that put a lot of doubts in my mind... and it kept me very humble, but I was also definitely happy to prove those people otherwise, to prove MY own doubts wrong. I think I'm happy I've come this far. That I've achieved something I set out to do. At the age of 15, I told myself I was doing to do this, and I did it.

World of Warcraft because she's obviously a 13-year-old and it's the year 2006. Or because she doesn't have time to keep up with video games, being an internationally famous model and all.

Pejic's favorite style to model is couture because it's "the most extravagant and most artistic" type of clothing.

"a truthful depiction of the modeling industry."

"[W]hen I walk down a catwalk, all I think about is burgers!"