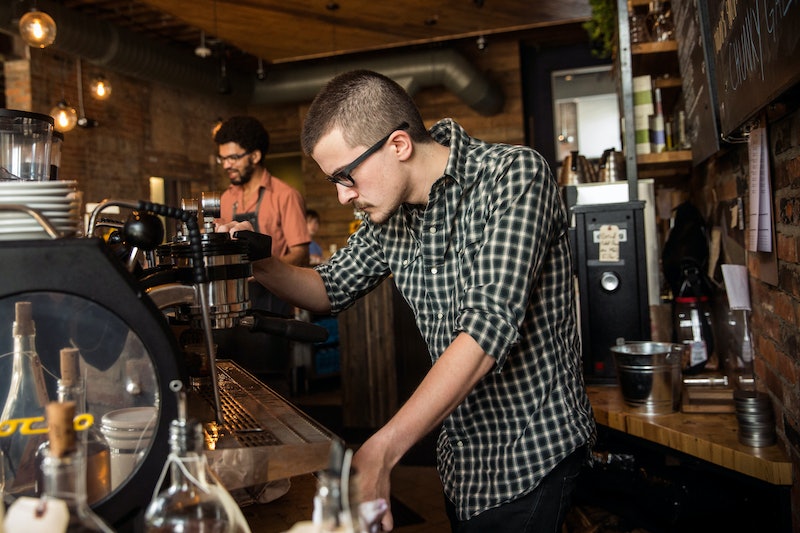 Crushes are an unavoidable, wonderful part of being alive. Even if you’re in a relationship, you'll still find yourself crushing on some of the people around you. Sometimes, all it takes is a smile from that guy you see in the elevator every morning and — bam! — a crush is put in motion. Although some crushes can lead to more intense feelings, it’s the crushes you have on the people who are part of your daily life that keep things fun and exciting, as you swoon for no good reason at all, except that they are just darling.

And when you live in a city with millions of people, there is no end to the number of crushes you can have. In fact, most of the time, you don’t even want to know their name, they’re just “Hot Guy In The Grey Peacoat On The Morning F Train.” The coat might be a different color, but if you're a city girl, I’m sure you have your own version, too.

As a city dweller who’s had crushes galore, here are the 15 types of crushes I'm pretty sure every city girl has had at one point or another. Substitute the gender of your choice, because some things are just universally adorable.

In another life, you were definitely soulmates. In this life, he's just so pretty to look at during your morning commute that you sometimes catch yourself staring and drooling. Elaborate fantasy backstories ensue.

the bike commuter who accidentally almost runs your over

Yeah, he's kind of a dick with a messenger bag, but there's something so cute about the way he knows exactly where he's going.

THE effortlessly cool GIRL WHO walks her dog in your neighborhood

You can't tell if you're crushing on her or her dog. Maybe both?

He's definitely not your type, but you know he'd make for a perfect cuddle buddy. I mean, he knows just how much foam you like! He remembers your name! He draws you flowers on your lattes! That's gotta mean something.

Although you have zero reason to think this way, you've convinced yourself that he has this glamorous secret. And, honestly, he looks like what one would think a Nobel laureate would look.

THE REBEL AT THE GYM WHO ACTUALLY RUNS IN CHUCKS

OMG. He smiled at you today! A real, genuine smile!

When he was a kid he helped Allen Ginsberg move into his East 2nd Street apartment and Norman Mailer would give his mom his old issues of the New Yorker magazine. Seriously, what in there is not swoon-worthy?

your hairdresser with THAT PERFECT RED LIPSTICK

Why can't you look so hot in all black without looking like you're funeral bound? Just seeing her just makes your day.

the bouncer you have an unexplained philisophical connection with

Mostly, you talk about the meaning of life while he cards 18-year-olds.

THE INTERN AT YOUR OFFICE

He can't legally drink so he never comes to happy hour, but considering you don't know the last time someone looked at you like that, you just can't help but fantasize about kissing him ... in the stock room.

If you saw him sober, you probably wouldn't recognize him, but at 4 a.m., with a slice of pizza on a paper plate, he's the love of your life.

THE NEIGHBOR ACROSS THE STREET WHO actualy SAYs ‘HELLO’ TO EVERYONE

He’s either from the Midwest or new to the city. Either way, he's dreamy as can be.

Ah, the tortured artist. You're quite certain he's the next Jean Michel Basquiat, although for all you know who could paint houses and not canvases.

THE HIPPIE AT THE SMOOTHIE BAR AROUND THE CORNER FROM WORK

He always lets you take a piece of vegan banana bread for free when his boss isn't around and comments on your positive energy. You never knew dreads could be so sexy.

the c-list celebrity you keep running into

You will make eye contact one of these days. It's pretty much fate at this point.