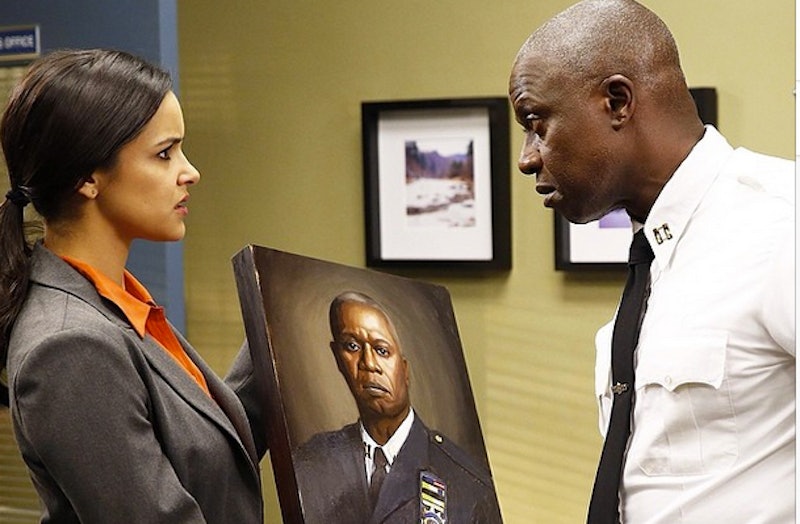 Good news, Holt Heads, or, erm, fans of Brooklyn Nine-Nine’s Captain Ray Holt. It looks like we’re going to learn more about the 99th Precinct’s Commanding Officer in the Brooklyn Nine-Nine Season 2. And no, you don’t have to go by my invented fanbased named “Holt Heads.” Code name Cold Mountain works just as well, cue wink. Andy Samberg's Peralta would be so proud.

According to co-creator and co-executive producer Dan Goor, fans of Brooklyn Nine-Nine and all of its well-intended mishaps can expect more about the stoic captain played by Andre Braugher, who was Emmy-nominated for his role. For instance, will we see his husband, Kevin Cozner, again? What's going on with Kyra Sedgwick? Is Holt truly over his Cwazy Cupcakes (aka Candy Crush) addiction?

OK, so he probably is well and done with the Cwazy Cupcake app for now, but there's still plenty of things to expect. Let's take a look before the show starts up again on Sunday, Sept. 28.

It looks like Holt's onscreen husband March Evan Jackson will be back for another episode. "He's great and he's very funny in the episode," Goor says, and while it's only one it might not strictly be left at that for the rest of the season. "We are such huge fans of [Jackson] and of their relationship and we haven't really yet done another major relationship story of theirs this season so we need to do that."

More importantly, the episode will show Holt's home away from the precinct again — the couple threw a party last year and we met Holt's Columbia Professor husband Kevin Cozner — so now we can focus on whether there is a secret staircase perhaps in his living quarters? Is there possibly an underground Batcave somewhere? OK, probably not, but he is the police captain. I wouldn't put it past him.

He Has a Rival

Gasps! This face? The Closer star Kyra Sedgwick will have a two-episode arc as Deputy Chief Madeline Wuntch, a long standing nemesis of Holt's.

"Kyra brings so much pressure and gravitas to the role — exactly the traits needed to stand off against Andre Braugher," Goor says. She also pitched what Goor says is one of the funniest flashbacks of the season. Hyperbole aside, I can't wait to see what could give Holt such a grudge. Is it cute related? Is it about a possible commanding officer position he could've gotten? Is he jealous that Sedgwich is only one degree away from Kevin Bacon? Only time will tell.

Flashbacks are always fun, especially when it means seeing Holt with his bushy 'stache and his head of hair, and since Sedgwick and Holt's rivalry goes back 25 years, we're obviously in store for more Holt hair action and possibly more disco yo-yo's.

We'll finally see who Holt's mama, affectionately called "your honor" during phone conversations, is. For one, we know that she's a federal judge. For another, we know that they talk on the phone. That's it. Goor also added, "I want to meet 'your honor' but I don't think she'd have a problem with his sexuality."

This makes sense, because one of the strongest elements of the show is how they have a diverse array of characters but do not necessarily make their diversity the punchline.

"Our intention wasn't to be groundbreaking," Goor says, "but our intention was to portray a gay character where that is a secondary aspect of his personality. It's a trait insofar as being heterosexual is a trait. He has a husband as opposed to a wife."

I take this as a good sign because it means they'll have to think outside the box to introduce some sort of conflict for a homosexual character. Something TV hasn't approached before. I'm excited to see what they do with Holt and the rest of the squad, and lucky for us, we don't have much time to wait. The show comes back in two weeks.