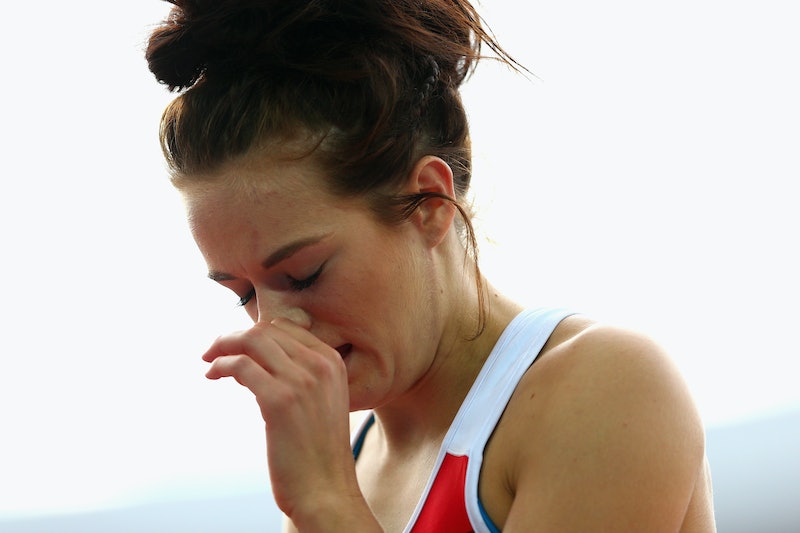 You were dating someone great, and now, you aren't. Sure, there were problems but they weren't anything you didn't think the two of you couldn't solve. Maybe that's because being in this relationship turned you into some Pollyanna-meets-Mary-Poppins type of faux-happy zombie. Maybe you're just endlessly optimistic. Either way, it ultimately didn't matter. He pulled the plug, and while you understand why, understanding doesn't equal an immediate healing of your heart meats. Healing the heart meats is a much messier, much more time-consuming project than understanding. To aid in that part of things, here are 14 weirdly helpful things to try when the post-dumping blues have got you down.

Since you’ve probably burned all of your romantic comedies in a small fire, may I suggest turning to action movies for solace. Preferably, action movies starring Tom Cruise whose dead shark eyes promise nothing, and whose passion for motorcycles and exploding things in three dimensions for your amusement offers pure, violent, mindless entertainment.

When I’m upset I tweet at celebrities I admire. Sometimes I comment on Michael Keaton’s Instagram. He mostly takes pictures of articles in the newspaper. He never responds though, which can be ego-crushing. To that end, aim low, reaching out to stars of reality shows and podcast hosts who you want to befriend.

Become quietly obsessed with your skin

Rather than address the reasons behind getting shelved, concentrate on your dermis. Post-dumping I basically turn into this:

No lie, I actually own one of these now:

Its benefits include age reduction therapy and no one seeing you cry!

Send salacious emails to randoms on the internet

Get some wine in you and get back on that horse of online dating. You don’t have to date actually anyone. You don’t have to actually do anything. But sending a series of “heeeeeeyyyyy” messages to hotties with bodies that don’t quit is rumored to have brought the Dude Nation much joy for years. Time to see what the fuss is all about.

When all of the sudden you find yourself dying to sob loudly and heartily, do it. I call these sob-bursts. Don’t care who sees you, don’t care where you are, when the gravity of the loss you’re experiencing strikes you, get your loud-ass sob on: It’s allowed. True story, this was basically me for most of yesterday:

Fact: Babies, kittens, puppies, and squirrels wearing casts are nature’s greatest palliatives for all that might ail you. If you can access one of these and get to squeezing it, you will feel ever-so-slightly better. If you opt for baby-squeezing, make sure it is a baby you know because you’re way too cute for jail.

If you’re uncomfortable talking to yourself, talk to the baby, kitten, puppy, or injured squirrel you have acquired. “This sucks” “This can’t be real” “I can’t believe this is happening” and “what did I do?!” are all perfectly acceptable exclamations.

Your iTunes library is currently a mine field of playlists he made you of songs with special meaning and the exquisite agony of anything in a minor key. If you want to listen to music (and you might not want to at all) curate that shit.

For the last twenty-four hours I’ve been walking around my apartment loudly proclaiming that “I Can Do Bad All By Myself”. I can’t say that it’s been helpful, but it’s been distracting.

Got nothing to glue together? BREAK SOME SHIT AND GET TO GLUING. I’ve tricked you into being willfully destructive.

If he said he just needs time, or thinks space will be good for you guys, or that he "really does think you’re great", or anything else that at the time felt like salt in the wound, let yourself believe it if only for a second or two. It’s okay to want things. It’s okay to be naive. It’s okay to still trust this person. That stuff doesn’t go away in a night.

Indulge in the cliches

Stop showering, move into your pajamas, main-line wine, eat only chocolate and pizza and wail, wail, wail. Who cares if it’s a cliche? It’s a cliche for a reason: Getting dumped sucks and pajamas and wine don’t.

More like this
Are Gemini & Scorpio Compatible In A Relationship?
By Kristine Fellizar
The Most Compatible Life Path Numbers, According To Numerologists
By Kristine Fellizar
Here’s How To Deal With Sexual Frustration If You Don’t Want Casual Sex
By Annakeara Stinson and Mackenzie Sylvester
Here’s How To Reignite The Spark In A Sexless Relationship
By Vanessa Marin
Get Even More From Bustle — Sign Up For The Newsletter