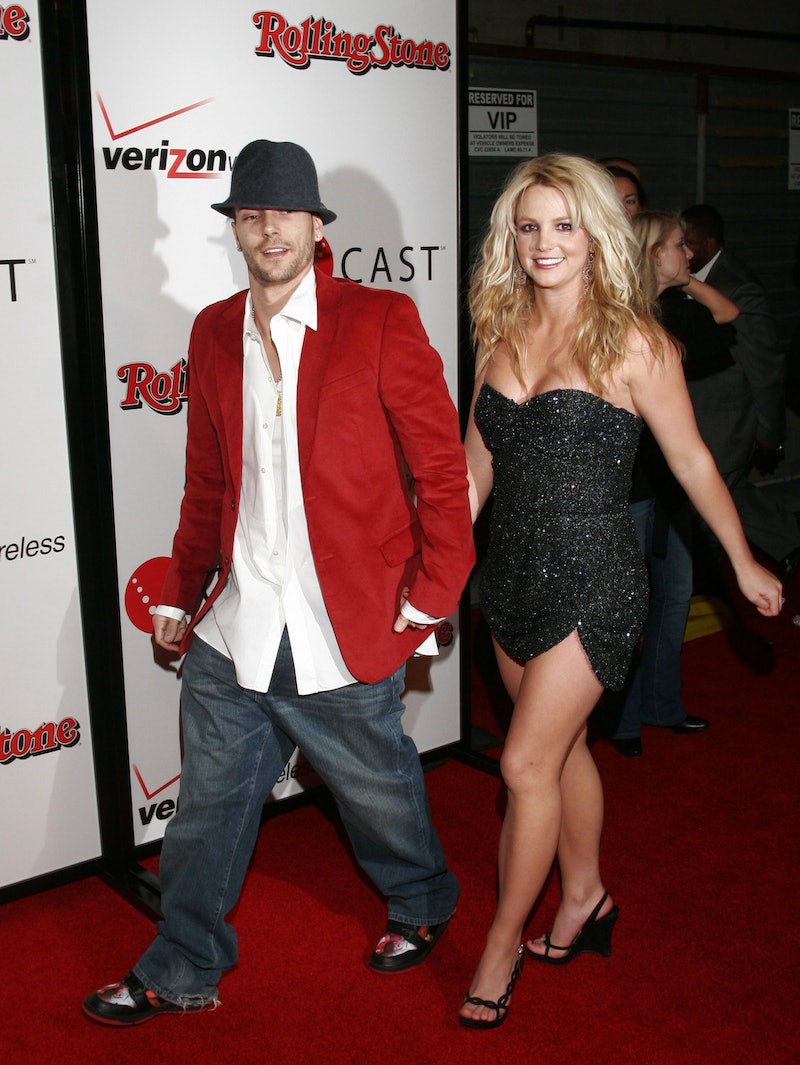 Britney and Kevin: Chaotic has aged like a piece of chewing gum that’d been haphazardly stuck to the underside of a picnic table nine years ago: When your palm accidentally grazes the piece of fossilized gum, you instinctively yank your hand away, scramble for some hand sanitizer, and wonder why someone would do something so gross. But after you disinfect your mitts, you realize it could’ve been worse. It could’ve been a goopy piece of gum left by a stranger only an hour before you sat down. You are grateful for the time that has passed.

In 2013, Britney Spears told The Telegraph that Britney and Kevin: Chaotic “was probably the worst thing I’ve done in my career.”

I mean, I’m not going to challenge Brit Brit on that one.

After I watched all five episodes of Britney and Kevin: Chaotic back in 2005, I tried to scrub it out of my mind immediately. It was too dark, too weird, too grim, too much. To say it wasn't the documentary this superfan expected would be an understatement.

But when I revisited it in 2014, I found the docuseries to be significantly more palatable, primarily because I knew Britney would go on to make it through the shit tornado that was the mid-'00s. Yes, Chaotic remains a strange watch, but Britney is OK now, and for that I am grateful.

This piece of gum isn’t fresh and goopy anymore, and for that I am grateful.

But stale chewing gum isn't the only thing I'm grateful for: The words that come out of Britney and Kevin's mouths throughout Chaotic are nothing short of gifts. I'm not kidding when I say there are some quotes that made revisiting the show totally worth it. (Am I currently working on memorizing Britney's art monologue? MAYBE.)

The best quotes from 'Britney and Kevin: Chaotic'

Britney: “They look like boobs, but they’re not. THEY’RE MY KNEES!”

Felicia Culotta re: Britney dancing around before she goes onstage for TRL: “Her Starbucks has kicked in."

Britney: “What’s your favorite sex position?”JC Chasez: “I don’t like one position. I’m a bad boy … I like a lot of them, not all of them. A lot of them.”

Britney after her weave has been removed: “I look like a cone head.”

Britney: “What do you think about Eminem?”Kevin: “I think he’s a genius."Britney: “He is a genius. But he complains a lot. But that’s cool.”Kevin: “I don’t know a person who doesn’t.”Britney: “‘Cause it’s cool when guys complain about things that girls have done to them, or their mothers. Personally, I think it’s kinda fucked up, but it’s like—"[Kevin cracks up. Britney cracks up.] Britney: “But hey, whatever gets you in the game, right? And gets you out there, that’s cool. That’s controversy. That’s what they all want, that’s what they want to see, it’s how good you can play the game."

Britney re: a piece of artwork hanging in their hotel room: “That’s a hot picture. I wonder what it means. Everyone has their own interpretation of what things mean to them. My interpretation of this would probably be: a lady on top of the world, and she’s in love with that guy right there with the arrow. But he may break her heart and put something through it. And the little person down there is her fairy trying to help her, not make her fall so hard to get hurt.”

Britney: “Everything depends on the magic in a kiss.”

Britney: “We found out that Jennifer Aniston and Brad Pitt broke up. So I have a feeling that he’s thinking about me … Just playing. He probably wouldn’t even look my way. I don’t care, ‘cause we can dream. Weee can dreeeeam! I wouldn’t leave you for him anyway, because it’s a dream, not reality.”

Britney after Kevin doesn't respond to her declaration of love: “I thought that’s the way I felt, but I really don’t feel that way. Maybe in the future I could possibly feel that way, but right now I don’t. I need to get some chips. I lied. I was caught in the moment … All we do is live in a bunch of different moments. You’re the first person that I have had a lot of belief in moments. That doesn’t mean that I love you.”

Britney: “Have you seen Brad Pitt in Fight Club? That is Brad Ass Pitt.”

Kevin zooms in on Britney while she's smoking: “Bad… habits.”

Kevin: “She thinks the way that the way me and her hooked up was planned.”Britney: “We went to a club, and all of a sudden, out of the blue, Kevin was there. So that’s why I think you’re not real.”

Britney: “I want someday who will take care of me and that sounds stupid. Is that stupid?”Kevin: “It’s the furthest thing from stupid. It’s probably the smartest thing I’ve heard you say since I’ve been out here.”

Britney: “Should I sing? Start doing opera?” [Britney stands out on the balcony of her hotel room and hits some operatic notes. The crowd below stares up at her.]

Britney re: the border patrol at the Spain/France border stopping the tour bus: “Right now, we’re being interrogated. There’s men trying to get on our bus and I’m about to be kidnapped ... I’m really scared. And this is my last few words to the world: I love you guys. This is it. I’m about to die. They’re going to kidnap me and take me away forever. If anybody finds this tape, I just want to be remembered as a good person. [Smiles.] That was kinda deep!”

Britney re: the border patrol, part two: “We really are about to get kidnapped. There’s a dog. He’s gonna come on my bus. Why do they got army hats on?”Kevin: “Because they’re military dudes.”Britney: “That’s gotta be a boring job. At least I get to dress up in tight outfits and change them up a little bit. They gotta wear the same damn thing every day.”

[Britney emerges from the tour bus restroom. Felicia whips around and gives the camera a look.]Kevin: “Did you have fun about five minutes ago?”[Britney glares at the camera.]

Britney to Kevin re: their Paris hotel room: “Have we been upstairs yet?”

Britney re: the garter removal: “My dad was watching.” Kevin: “No he was not.” Britney: “My brother was.” Kevin: “Yeah your brother, I don’t care. Daddy wasn’t watching ... My mom was in the background rooting me on. Thanks, Mom.”

Kevin: “After the wedding, we changed into our PIMP OUTFITS!”

And on that note, cue the theme song!