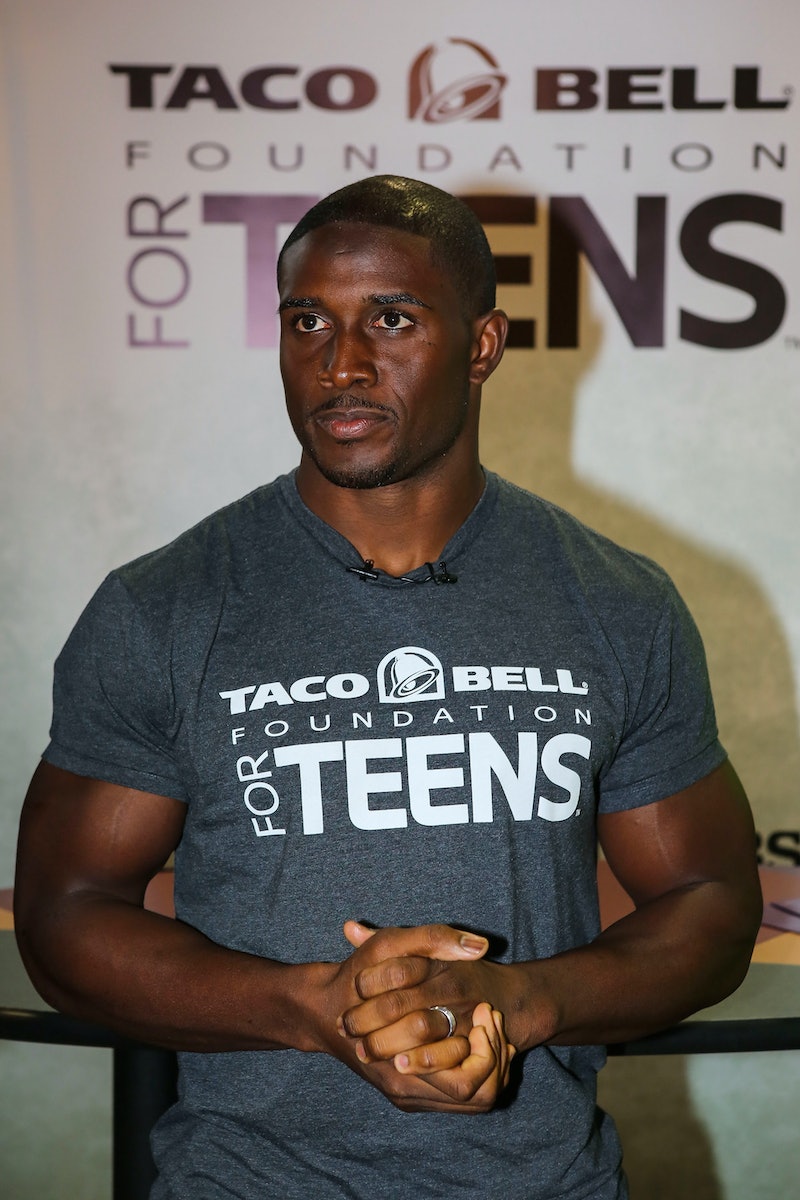 As if the Ray Rice situation wasn't bad enough, then Minnesota Vikings player Adrian Peterson was just deactivated indefinitely for hitting his 4-year-old son with a tree branch. It's not a good time for the NFL right now and it's clear they need to make some changes to better handle situations like this without sweeping things under the rug. But while everyone from Nike to Raddison have distanced themselves from Peterson, fellow footballer Reggie Bush is stepping in to defend Adrian Peterson in a really weird way. The Detroit Lions' team member told the radio hosts of WFAN-FM's "Boomer & Carton" that he thinks Peterson should still be allowed to play, and has some excuses for his actions.

"Adrian Peterson, I've known for a while, and he's a good guy ... I don't know all the details of the situation what happened, but I know me and like a lot of other guys who were born in the '80s, and even before then, were raised differently and disciplined differently. And I was one of those kids. I got what we called 'whoopings,' whooped with belts and stuff like that. For me, growing up, it was normal ... I'm sure there's no ill intent against his own son."

Oh, Reggie. Just like the "he's a good guy" excuse doesn't allow him to get away with hitting his kid, the "I was raised that way" defense doesn't excuse his actions. Some people were raised to hate black people or gay people, but that doesn't make it right. Some people were raised to hit women, but that doesn't mean they're not allowed to be punished if they do the same.

Unfortunately, the interview only got worse from there as Bush weirdly tried to compare himself to Peterson.

"I have a 1-year-old daughter, and I discipline her ... I definitely will try to—obviously not leave bruises or anything like that on her—but I definitely will discipline her harshly depending on, again, what the situation is ... And I'm not saying that I'm not going to spank her ... Whatever I do, whatever discipline I give her, it's always out of love, and it's always because I want the best for her, for my daughter, for my kids."

Bush's word choice was very unfortunate using phrases like "discipline her harshly" when talking about his one year old daughter.

And word to the wise, even if you "obviously" won't leave bruises, that doesn't mean what you're doing isn't abuse. In an article called, "When the Bruises Can't Be Seen," a domestic violence victim writes about how hard it was for her to see that she was being abused because she didn't have any marks on her body.

I'm an abused wife—no, I have no black and blue marks to point to this fact; my husband generally doesn't stoop to outright blows. Actually, that's exactly what prevented me from reaching this inescapable conclusion many years ago ... But abuse, as I have come to learn, comes in many forms.

But Bush sees no issue with corporal punishment. When the question was asked, "Would you consider using a switch if your child was 'misbehaving,' as a method of discipline in your house?" Bush replied, "I would possibly consider it, depending on what she did."

Which makes it seem like since he does stand by spankings, he also is okay with the violent-sounding whoopings because apparently to him it's just an issue of semantics.

I don't understand why he's attempting to excuse Peterson's behavior by comparing him to parents of the past, or to his own parenting methods. These last few weeks have been very important in moving the conversation on violence in the NFL in a positive way and Bush's interview is the opposite of constructive. It places blame on an older generation and excuses Peterson's behavior because he was just brought up that way.

I think Reggie Bush deserves all the blowback he's getting about this interview because what he said didn't help move the conversation forward in a positive manner and, frankly, he was totally out of touch. But hopefully the negative feedback surrounding his comments can help contribute to the overhaul of the NFL and their standards on issues like child abuse and discipline.