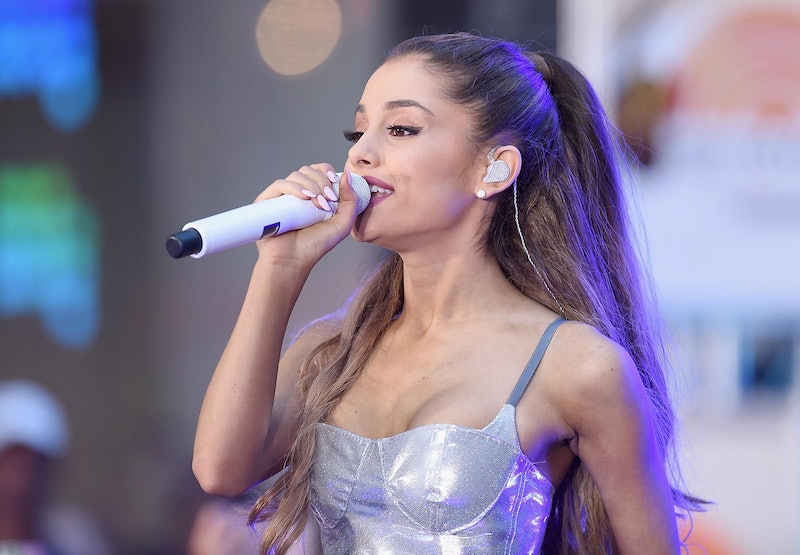 Each day, the Ariana Grande diva mythos grows more and more compelling. The most recent story in the burgeoning oral tradition of the pop star being a first-rate pain in the butt: Ariana Grande reportedly hopes her fans "all f**king die." Or, that's what we think she said...

The situation allegedly went down like this: Grande, after displaying her left side for the requisite fan selfies at a meet and greet, was all smiles. She was led out of the throng into an elevator by her security, and the moment the doors closed, she was heard uttering "I hope they all f**king die." Now, I kinda buy that Ariana Grande would be a bit of a brat. In interviews, she strikes me as entitled, inaccessible, and uninterested in connecting with people.

But, giving Grande a momentary benefit of the doubt, it's easy to mis-hear a mumbler (Grande often speaks in an unintelligible soft mew) and it's possible that she was saying something totally innocent. Instead of "I hope they all fucking die" she could have been saying "I hope there's duck fat fries." On the opposite side of the argument, maybe she's been throwing her fans secret shade in poorly-enunciated lyrics this whole freakin' time. Perhaps when we hear "I'm stronger than I've been before", she's really saying "I'm striking out, I hate you whores." But it's said in such a breathy voice that it sounds nice.

Given the ambiguity of many things that Grande has ever sang, let's examine all her hard-to-decipher lyrics for clues as to whether or not she wishes all of her fans would die and stop buying her records.

I get butterflies, just thinkingAbout you boy you're on my mindSometimes I catch myself daydreamingLost in your eyes and I lose all track of time

I could butcher eyes just thinking

Bout chernobyl on my time

Sometimes I catch myself daydreaming

Lost in Europe and a loser tractor time.

What it means: YEESH! Some seriously macabre imagery in there. A darkness lurks in the heart of a pop star.

If you go gingkgo biloba

I take it every day

You can get water if you need it from me

What it means: Ariana takes daily vitamins, and wants to share the power of Ginkgo Biloba with the masses. It's great for the memory. Not only will she give you her supplements, she'll pour you a glass of water to wash it down. Point for non-diva.

When I drive an airplane-it be surfing all crazy

Worse I'm high on the flight

What is means: Erm, well it appears that she's been taking a page out of Denzel Washington's drunk pilot role in Flight. She could be directing aggression to all the on-board passengers by flying under the influence, or maybe she just wants to experiment with hobby planes. Overall, this one's inconclusive.

I only wanna die alive

Never by the hands of a broken heart

Now that I've become who I really are

I only want 'em dying why

Now that I've become who I really are

What it means: Ruh-roh. Is she talking about us in the first line there? Doesn't look good. I would call this hostile.

We may never know what Ariana Grande said in the elevator that day. Neither will we ever truly know what the right side of her face looks like in natural light. However, we can say that a few elocution lessons may help her avoid any subsequent PR nightmares.