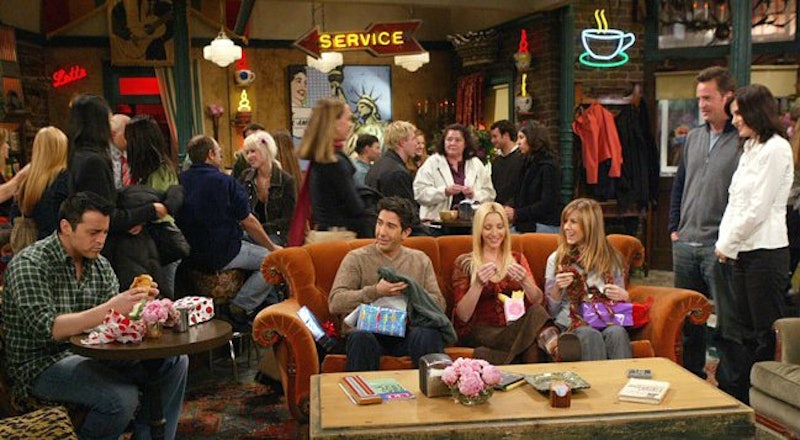 The Central Perk pop-up is not what you think. Well, maybe it is if you expected a more of a museum experience than a coffee shop one, but if you thought it would be like the Central Perk on Friends recreated, you are wrong, wrong wrong. But does that mean you shouldn't visit if you're a huge Friends fan? Not at all, you should just know what you're getting into. There's some cool stuff at the pop-up, but a real life Central Perk it is not.

The Central Perk pop-up opened on Wednesday, Sept. 17 in New York City's Soho neighborhood and will be around until Oct. 18. When news of the shop first came out, I expected it would be a chance for Central Perk to exist in the real world. I figured that there would be rules like "no sitting on the couch for more than five minutes" and a limit on the amount of time you could stay inside, but I thought it would be organized and decorated to look like the real place. The couch would be situated in the middle of the room to the right of the counter, and behind it there would be a few tables. The place where Phoebe always played her songs would be all the way to the right by a window and the decor would be just like that of the "real" Central Perk with a wide variety of art hanging on the walls.

Instead, the shop is more like a tiny museum all about Friends — but if you're a Friends fan, that might be a good thing. Here's what you can expect:

The line extended around the block when I went to the pop-up. Granted, this was on the first day, but it was also at 10 a.m. on a Wednesday morning. Basically, you shouldn't expect that people being at work makes going during the day a better option. It took me about an hour and a half to get inside.

Memorabilia from the Show

When you finally make it through the line and enter the cafe, the first thing you'll see is a selection of costumes and other memorabilia from the show. The white dog sculpture is there as well as the Geller Cup!

There is, in fact, coffee at this coffee shop. The pop-up is sponsored by Eight O'Clock Coffee and there are four drink options visitors can choose from for their free small cup.

The famous couch is there and you can sit on it. But don't expect to just plop on down with five of your friends. You have to wait until a photographer allows you into the couch area, at which point they'll take a picture of you sitting on the couch and give you a card so you can find your photo online. Yep, just like an aquarium or amusement park.

No one was sitting around watching it, but there is a TV there for your viewing pleasure.

Unlike the coffee, the souvenirs aren't free. Totes bags, t-shirts, and caps are available and prices are all around $20.

Take a picture on the couch! Take a picture with a box of Smelly Cat brand kitty litter! Take a picture with your cup of coffee that isn't served in a mug! Don't feel like waiting in line? Follow the lead of many others before you and take a picture in front of the Central Perk sign without going inside. (By the way, you can totally peek through the windows and see the inside without waiting.)

So there you have it. Don't expect a real Central Perk where you can go chill and pop some of your best Chandler-inspired jokes, but if you really are a big fan of the show, there's still plenty of things you might be interested in. Plus, free coffee.