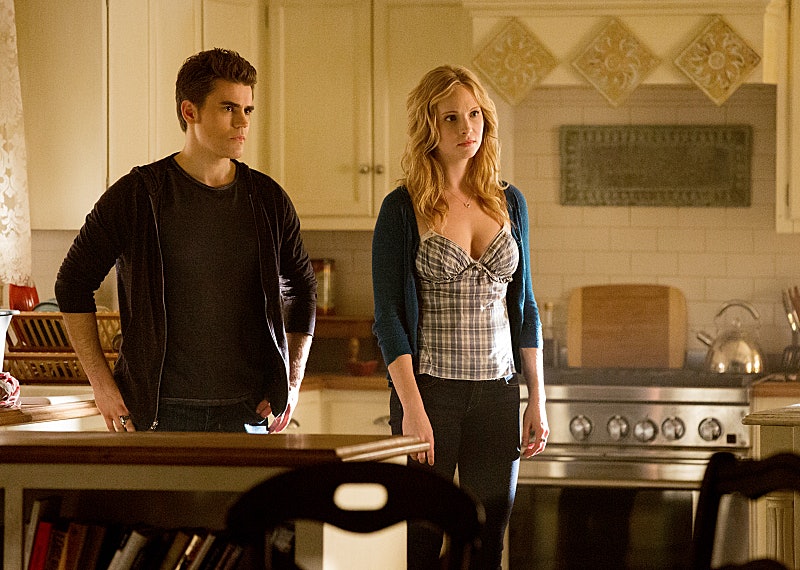 Talk about a lost investment. Vampire Diaries fans spent the better part of Season 5 getting emotionally attached to the potential future of Steroline, especially after Caroline professed her love to Stefan, and now it's just not going to happen. According to an E! Online report, showrunner Julie Plec revealed what we can expect from the pair's relationship next season and it's not pretty. According to E!'s spoiler, Stefan and Caroline won't be together on The Vampire Diaries Season 6. In fact, they probably won't even be friends, so we can really forget about their slow-burning potential love story. Time to hang up your hats, Steroline fans.

I know, it hurts. Now you all know how painful it was for Klaroline 'shippers when Plec basically said that couple was dunzo for the foreseeable future. It's one thing for Steroline to not happen because Stefan's just not emotionally prepared to be in a relationship while he's mourning Damon, but to take away his best friend? That's a little much. But, according to Plec, it's going to be all Stefan's fault. The showrunner told E! that it's not going to sit well with Caroline how Stefan decides to get over the death. "His determination to move on and start a new life after the loss of his brother may ultimately ruin the friendship he's built with her over the years," Plec told E!. But Stefan and Caroline were so close in Season 5, what exactly could he be doing that Caroline will feel so repelled by?

The latest trailer for TVD Season 6 has Caroline reveal, during a conversation with Alaric, that Stefan left all of his friends behind without saying goodbye. That, in itself, could be enough to have Caroline become anti-Stefan. I mean, who just ditches all of his friends who have all suffered the same loss he has? That's kind of screwed up, especially because it's obvious that they really need him right now. Caroline's all about being a good, supportive (to a fault) friend to everyone — hence how she ended up friend-zoned by Stefan in the first place. So, if he's just ditching out on everyone in their time of need, that's totally not going to fly with her.

The trailer also shows Stefan in bed with a new girl who's yet to be introduced on the series. Has Stefan turned off his emotions and become the ultimate player of the supernatural community or is he just looking for an escape in someone who doesn't know him? I couldn't think of anything worse for Caroline to have to witness and/or hear about from an outside source after professing her love for him and losing Bonnie. She let herself be vulnerable again and Stefan's just going to run away and trust some random girl to help him through this?

There's also the fact that Stefan is being super hard on Elena when it comes to moving on from Damon's death. He's clearly being a hypocrite because all he's done is run away from his pain, rather than confronting it head-on with the people who love him, including Caroline. In the trailer we see Stefan tell Elena that Damon's dead and there's nothing left, which really is not the best thing to say to a girl who just lost the love of her life and who has a history of burning houses to the ground. He's setting Elena off the deep end, but Caroline's the only one around to pick up the pieces. It's just cruel. And, again, Caroline prides herself on being a loyal friend, especially to her BEST friend Elena. If Stefan's taking his pent-up pain out on Elena and making her suffer more, Caroline's going to hate that.

I know, Stefan's in mourning and he shouldn't have to mourn in a way that Caroline agrees with. But, if the TVD Season 6 trailer is any indication, Stefan's turning into a heartless monster and no one can expect Caroline to take that laying down. If Stefan wants to shut down, he can't expect her to try to fix him — especially when she's got what looks like a HUGE Elena problem on her hands.

More like this
Will Vampire In The Garden Get A Season 2? What To Know
By Kadin Burnett
Oops! The 'Stranger Things' Monopoly Game Has Spoilers For Season 4
By Alyssa Lapid
Pete Davidson & Kate McKinnon Are Part Of A Reported Major SNL Cast Shakeup
By Brad Witter
Billie Piper Just Confirmed 'I Hate Suzie’s Festive Return
By Kayla Blanton and Shahed Ezaydi
Get Even More From Bustle — Sign Up For The Newsletter