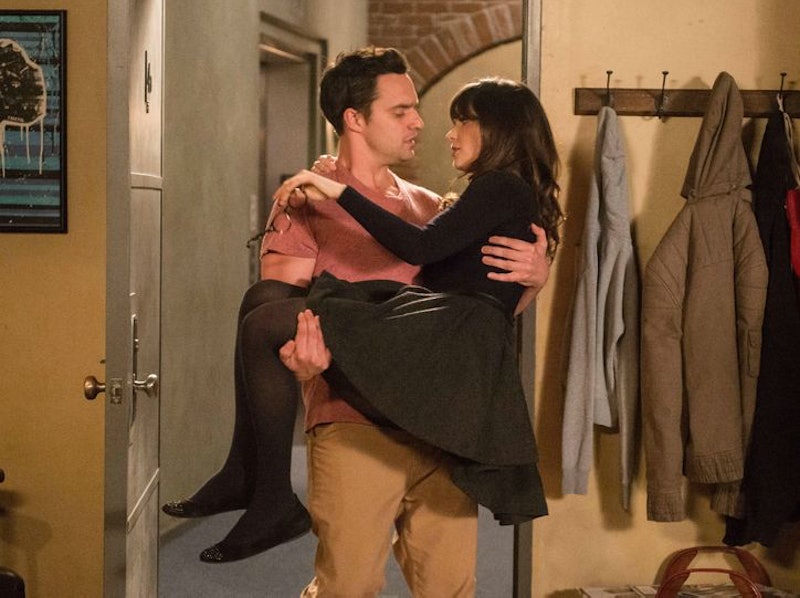 If you're as devastated as I was (and still am — STILL AM, New Girl writers) about the eleventh hour Season 3 breakup of odd couple Nick and Jess, then Tuesday night's Season 4 premiere of New Girl should have eased your sorrow, if only slightly. Throwing tomatoes at your screen because you don't believe me? Well, before you boo me off stage in an utterly scarring way (be gentle, I'm sensitive), hear me out. I know that they're still broken up and that they were actively searching for other people to do the nasty with. Whatever, they're human and according to Schmidt, it's been four months of celibacy for the pair (and that's a long damn time for the loft mates). But it has nothing to do with their underlying feelings for each other and those feelings are quite evidently still there.

As I see it, they never stopped having feelings for each other. The love and chemistry thing was never their problem. They're inability to reconcile being a couple and having to make sacrifices was what did them in. Connections like Nick and Jess' don't just go away. Well, at least in sitcoms they don't. Something about foreshadowing and continuity and fan revolts and all that.

And yes, I know, you know, and as evidenced by an interview with HitFix, the writers know, that the relationship didn't go over so hot on-screen despite the two years of tension that built towards it. But that doesn't mean Nick and Jess are done for good. Writer, creator, and jack-of-all-trades, Liz Meriwether elaborated on the Nick and Jess factor telling HitFix, "For me, the heart of the show has always been Nick and Jess, and it will always be Nick and Jess, and I don't think this is the end for them." They, as a couple, are inevitable and Tuesday night's episode proved that all with a simple, putrid toilet.

Yes, a toilet. The single most romantic thing that's taken place on the show since Nick's surprise birthday for Jess which still has me reeling. Nothing truly tugs at my germaphobic heartstrings more than seeing two people share a dirty men's toilet seat (because let's be real, they're definitely dirtier than the ladies' ones, even with less use). But despite the aesthetic, the real romance was in the fact that despite spending 95 percent of the wedding apart, in the end they found each other in the most unlikely of places when they weren't even looking. How does that saying go again? Something about how the thing you need has been right in front of your face all along?

Running into each other at a particularly vulnerable moment for the both of them aside, put a check in the "made for each other" column that they ended up commiserating together over the same damn thing. Essentially, being toilet people and not fridge people — aka not being engaged or married or even catching a bus on their way down that road. But, I realized as they sat there together, encouraging and supporting each other to move on despite being momentarily miserable and harboring unresolved feelings, that the only way these two toilet people are ever going to become fridge people, ironically, is if they do it together. Because that's what love is, New Girl just chose to exact this example in the most reprehensible of places. Perhaps it was to drive the point home how unconventionally good for each other they are. It's just going to take a lot more accidental run-ins, sweet pep talks, lingering looks, and some serious self-realizations to get to the point where they accept that.