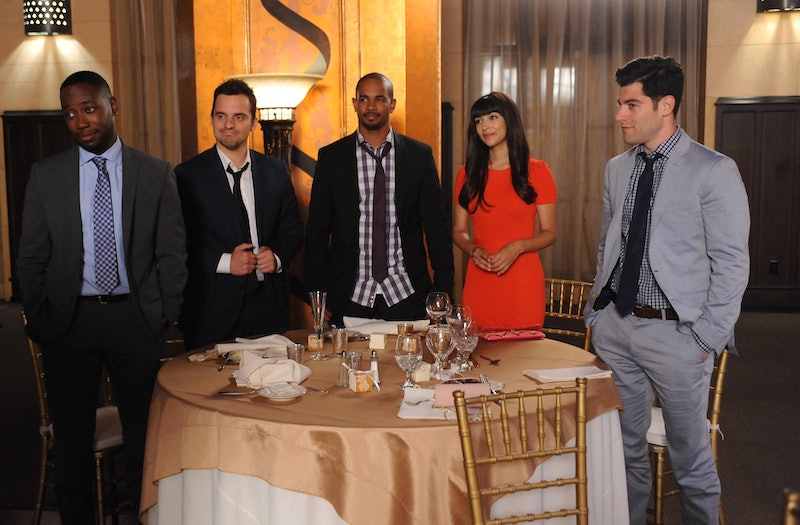 I think we can all agree that New Girl ’s third season fell a tad short on the hilarity scale. Not only did fans witness the end of Nick and Jess’ relationship, but it also turned Schmidt into an out-and-out jerk during that whole Elizabeth-Cece cheating debacle. (One of the few problems that can’t be fixed by simply putting money in the douchebag jar.) However, it feels as though Season 4 is looking to turn over a new leaf. “The Last Wedding” offered up everything you want to see in a New Girl season premiere: witty banter, group antics, and wedding shenanigans. All-in-all, I’d call this episode one big sex fist full of fun.

Just like us, the gang is gearing up to say goodbye to summer. For me, this means consuming as many frozen drinks as possible. For them, it involves attending one final wedding. Schmidt takes this opportunity to give the group a pep talk. This is their last chance to meet someone before having to gamble on the contents of a bulky sweater. Winter is coming, my friends, which means no one should be going home alone. WIth that in mind, it's wedding time! But just as Schmidt is starting to contemplate his prospects, Cece shows up after an entire summer of being away. This immediately has Schmidt rattled, clearly proving that he is nowhere close to being over her.

Luckily, this presented a perfect Schmidt and Nick bromance opportunity. Trying his best to finish his "Summer of Sex," Schmidt hits on one of the bridesmaids, who offers to go home with him, but only if he agrees to a foursome with her fellow bridesmaid and Nick. Obviously, a dilemma of this magnitude produced some top notch comedic gold between these two guys as they contemplated taking their relationship to that level. In the end, it didn't end up happening due to Nick's rough hands (and Winston's very descriptive salt and pepper demonstration). But it was just great to see these two besties getting some quality screen time together — something that I hope continues now that the two of them are single.

Though, who knows how long that will last now that Cece is back on the market. That's right, folks — the object of Schmidt's desire broke up with her boyfriend Buster over the summer and has been hesitant to tell Schmidt, figuring that he would probably do something very Schmidt-like. Which… fair enough. But find out he does and while it doesn't lead to anything right away, Schmidt and Cece 'shippers were definitely given a glimmer of hope.

Elsewhere, Jess was attempting to fist sex (her words, not mine) her way back to the single life by hitting on Ted, the best man. There’s just one problem, Jessica Biel’s character, Kat, also has her eye on him with no intention of backing down. Winston offers up some rather sage advice, telling Jess to just "be there" for Ted. Wherever he goes, whatever he does, just be there. (He referred to it as the Joe Biden.) And while Ted himself turned out to be a bit of a dud who can't decide which girl to take home, Biel was a welcome presence to the show. Please feel free to come back anytime. And as for Jess, she'll just have to continue keeping her eyes open for Mr. Right.

Hey girl… it's good to have you back!