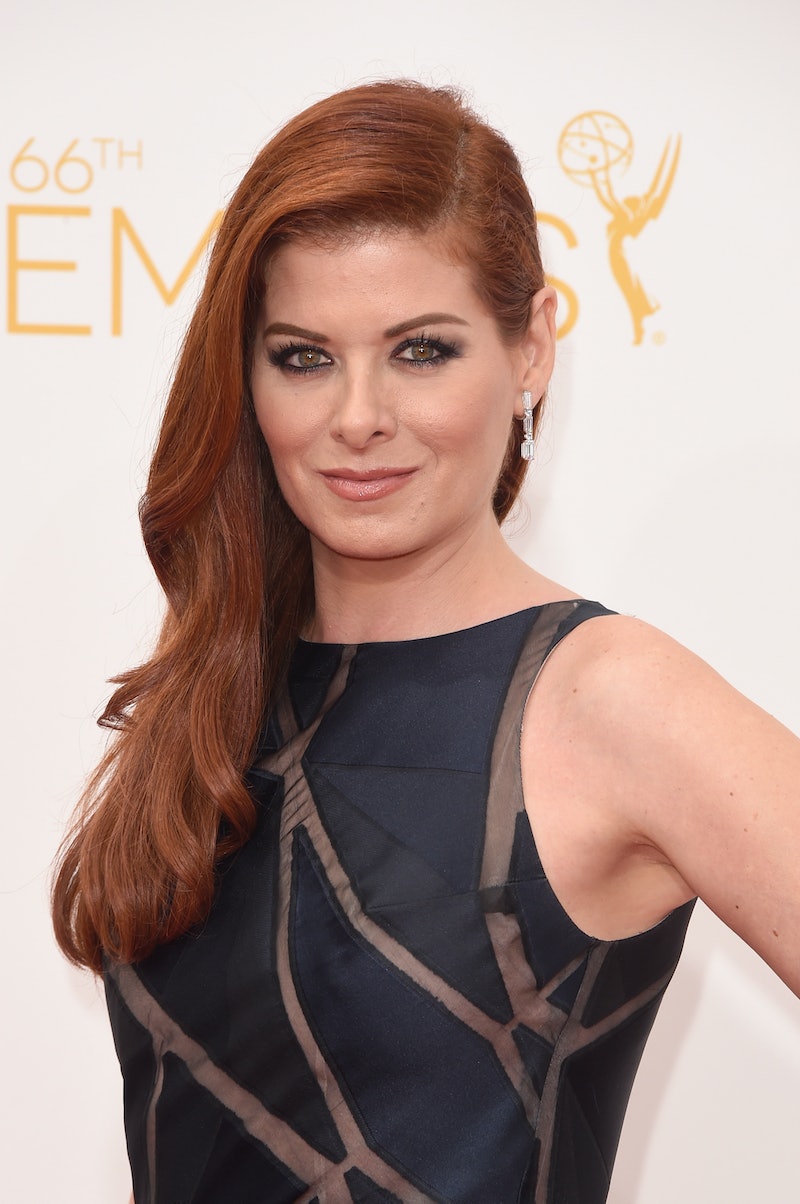 Debra Messing stars in NBC's new dramedy, The Mysteries Of Laura , premiering Wednesday at 10 p.m. The Will & Grace actress portrays Laura Diamond, a homicide detective who has to learn to juggle her demanding and dangerous job with being a single mother raising a pair of rambunctious twins. It's been a while since television has seen a cop show with a woman in the lead role — and whenever any new show debuts on primetime with a strong female protagonist it's a victory, since TV is notoriously a male-dominated art form. In an interview with Bustle, Messing reveals that she chooses her projects by their script, not their potential to make her into a "feminist icon," but with her views on the lack of women in television, she might have found herself in that role already.

"We all have to have hope. I think that it's been proven there are stories that are female-driven that are compelling or hilarious and work without having the male lead," she says. "It's just a matter of a paradigm shift, and people saying, 'These characters can be male or female.' That hasn't happened yet, but the discussion is active and has been active for a while, trying to make it a priority to mentor and support female writers and producers and directors so that we are better represented."

However, as promising as Messing's new role may be, it is somewhat undermined by a study released on Tuesday by San Diego State's Center for the Study of Women in Television and Film. In their 17th annual "Boxed In" report, they assert that — despite the success of such female-driven shows as Orange Is The New Black and Scandal — the representation of women on television was actually down in the 2013-14 season compared to the year before. The number of speaking roles on TV going to women decreased 2.3 percent to a meager 42 percent — a number even lower than it was during the 2007-08 season. The percentage of shows that employ four or fewer women? 44 percent. The percentage employ four or fewer men? 1 percent.

But at least The Mysteries of Laura is a step in the right direction, creating a complex role that Messing was drawn to. "It's not news that there are a lot more roles written for men, so just to begin with it's a smaller pool to choose from. I think for me, I got to a point where I felt like, 'You know what, I want to be a part of something that really excites me and feels new and fresh,'" she says. "It doesn't matter if I'm the star of the show or a co-star. I would rather be a smaller part in a great TV show than the lead in a poorly-written one. I'm hoping that the viewers will respond to this, because I think it's really kind of special. I love playing Laura, I think she's the most masculine character I've ever played, so to me that's interesting."

Hopefully The Mysteries Of Laura will be a success and help usher in even more broadcast shows with women in unconventional roles. Because we love TV, and we don't want to be ashamed of it anymore. Right, Grace?

More like this
Sandra Bullock, Girlboss Extraordinaire
By Matt Harkins & Viviana Olen
Kaley Cuoco & Tom Pelphrey Just Made Their First Public Appearance As A Couple
By Hugh McIntyre
'Ghost In The Shell: SAC_2045' Was Only Supposed To Last Two Seasons
By Kadin Burnett
What’s New On Netflix: 'Stranger Things' & 'Somebody Feed Phil' Return
By Arya Roshanian
Get Even More From Bustle — Sign Up For The Newsletter