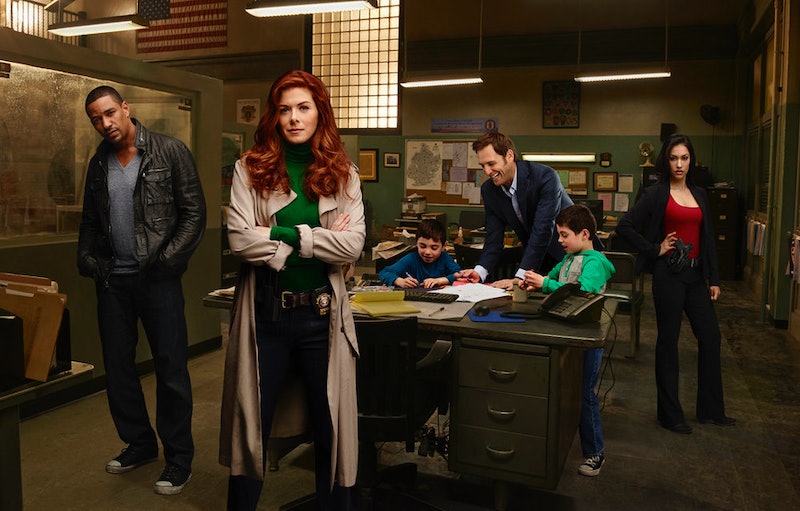 Debra Messing may be most well-known for playing Grace Adler on NBC's Will & Grace, but she's hoping to change that with her new show, The Mysteries Of Laura . That series, also airing on NBC, premieres with a special preview Wednesday at 10 p.m., before settling into its regular time slot of 8 p.m. next Wednesday, Sept. 24. There's a good reason Ms. Adler remains synonymous with Messing, even eight years after the show went off the air — Will & Grace was the highest-rated sitcom on television from 2001-2005, ran for eight seasons, picked up 83 Emmy nominations and won 16 of them, including a trophy for Messing herself. While it would be hard for any show to match Will & Grace's level of fame, in an interview with Bustle, Messing says that she's hoping Mysteries will succeed thanks to its old-fashioned nature.

Those who have seen promos for the show may be surprised to find out that it's an hour-long program; due to its generally light tone, you'd be forgiven for assuming that Mysteries is a 30-minute sitcom. Not so. 60-minute comedies are extremely rare (think ABC's Desperate Housewives), and it's this uniqueness that Messing thinks will draw viewers in. "I was told it was an hour-long dramedy, which was the first thing that made me excited, because hour-long dramedies don't exist on primetime television," Messing says. "So the challenge of bringing in that new genre of television show excited me right off the bat. I didn't have to choose, I didn't have to say, 'Do I want to do a drama or do I want to do a comedy?' Both can coexist in this."

But what excites the actress about the character of Laura Diamond, specifically? It probably has something to do with the fact that Laura mirrors Messing's own life so clearly. "The fact that she's at the top of her game professionally, that she's smart, and is confident, and knows that she's the best at her job. And that she also is just a typical single working mom who is constantly juggling trying to care for two young sons," Messing says of what drew her to the character. "She doesn't succeed all the time; in fact, she only succeeds half the time. Things go awry, things are messy, things are chaotic. To me, that's what speaks to me about this character: it's real life."

Another real life aspect of the series that appealed to Messing are it's true crime elements. "Nothing is more interesting than real life, so I watch 48 Hours and Dateline murders and Cold Justice and TruTV, where they show live courtroom hearings," she says. "To me, it's always shocking to see how extreme real life is. That's what I enjoy. But I also grew up on Law & Order and my parents watched Columbo, and Cagney & Lacey, and Moonlighting. I think our show is kind of a throwback to that kind of lighter police drama."

The actress jumped right into Mysteries after finishing a limited engagement on Broadway, where she costarred in John Patrick Shanley's new play Outside Mullingar with Brían F. O'Byrne (pictured above). When asked to compare her extensive television experience with her Broadway debut, Messing is effusive. "I can't even compare the two. It was probably one of the top five highlights of my life. As a child my goal, my dream, was to be on Broadway," she says. "Up until last year, I thought it was a dream that had passed me by. And then this beautiful, beautiful play written by John Patrick Shanley came up, and I got to work with these tremendous actors, and it was a dream job for me."

However that doesn't mean it was an easy job. "It was incredibly grueling and hard. I have such an awe for theatre actors who will do a play for a year straight, or two years even," Messing says. "You have to be almost an athlete, I think, to have the endurance to be able to do that. I definitely would do another short-run Broadway show again."

If you didn't get the chance to see Messing on Broadway, you might have seen her advertising Zyrtec, since the company recently hired her as their spokesperson. Messing has long suffered from severe allergies, sometimes to a debilitating extent. "I struggled with allergies my whole life, and it's really been a problem for me professionally," she explains. "There have been times when I've had to stop work because I'm having an attack. That's a very uncomfortable situation to be put in, when you don't have control. A couple of years ago I tried Zyrtec, and for the first time I found something that worked for me. I can be the mother I want to be, and the employee I want to be, and the activist I want to be."

2014 was a banner year for Messing: starring on Broadway wasn't the only dream that came true for her in the past 12 months. She sounds just as excited for her role on Mysteries. "You know, I'm a big murder mystery junkie, and I always have been," she says. "So to be able to play a role where I have to solve a very complicated, smart murder every week and also be able to do things that will make the viewers laugh... it just seems like a dream come true for me."