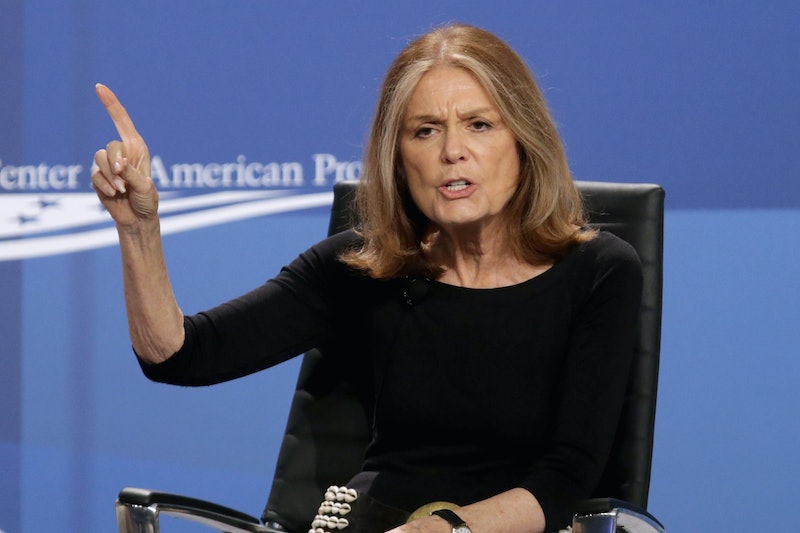 It's a travesty that I can't insert the "hands praying" emoji here, because that's exactly how I feel about the news that Gloria Steinem will be guest starring in an episode of The Good Wife season 6. Steinem will play herself on the upcoming season of the CBS drama that unfortunately flies under the radar but is still critically acclaimed. Star Julianna Margulies plays the often cold, always complicated lawyer Alicia Florrick, who dealt with her share of betrayal, heartbreak and sharp life turns in Season 5. Margulies snagged the Emmy this year for her stellar performance, and her warm, inspiring speech proves two things: she's nothing like Florrick, and she's an incredible actor.

In this interview on Live! With Kelly and Michael, Margulies unveils that the feminist icon Steinem would be appearing, and even more delightful, that Steinem is as much a fan of Margulies as Margulies is of her: "I don't usually get too woozy starstruck around people... but Gloria Steinem is on our show. I made a fool of myself and then I had to email her and apologize. I thought she was just doing us a favor... but she walks in and goes, 'Let's talk about Season 2; and then she started talking about every episode and the growth that my character has made and what it says about women in the world today."

It's not yet clear how Steinem will interact with the characters, but she will presumably be playing herself. Here are some of Steinem's potent quotes that do well in applying to The Good Wife.

"A woman without a man is like a fish without a bicycle."

Even though Alicia stayed with Peter after his indiscretion, it has never once seemed in the five seasons that she is totally dependent on him; yes, there's a lot of using going on in both sides, but she's still fiercely independent.

"Power can be taken, but not given. The process of the taking is empowerment in itself."

Is Florrick a user? Sure, but she's just playing by the rules of the game to stay one step ahead of the male presences on the show. Who could blame her?

"Law and justice are not always the same."

This one's pretty self-explanatory; the sheer amount of shady, immoral law that goes down on The Good Wife certainly blurs the lines of justice and law.

‪"Some of us are becoming the men we wanted to marry."

Alicia is so easy to root for, and Peter is so easy to loathe — he's a slimebag. But over the course of five seasons, Alicia Florrick, it seems, has become more and more vested in self-interest; Peter's influence is stronger than she thinks. Regardless, though, I want her to succeed because her self-preservation is survivalist.

"I have yet to hear a man ask for advice on how to combine marriage and a career."

An ever-present theme throughout the show, and the catalyst for the series, ‬there's a pointed awareness of her aim to balance her career and her family, struggling through the choices she must make, and the audience is painfully aware that this is only a divide because she's a woman.

The Good Wife returns for its sixth season on Sept. 21.

More like this
20 Photos From The 'Stranger Things' Season 4 Premiere To Make You Feel Old
By Alyssa Lapid
Sandra Bullock, Girlboss Extraordinaire
By Matt Harkins & Viviana Olen
Spice Girls’ Net Worth: The Richest Member Is Wealthier Than The Rest Combined
By Hugh McIntyre
Penn Badgley & Leighton Meester Met On A Horror Movie Set Before 'Gossip Girl'
By Jake Viswanath
Get Even More From Bustle — Sign Up For The Newsletter