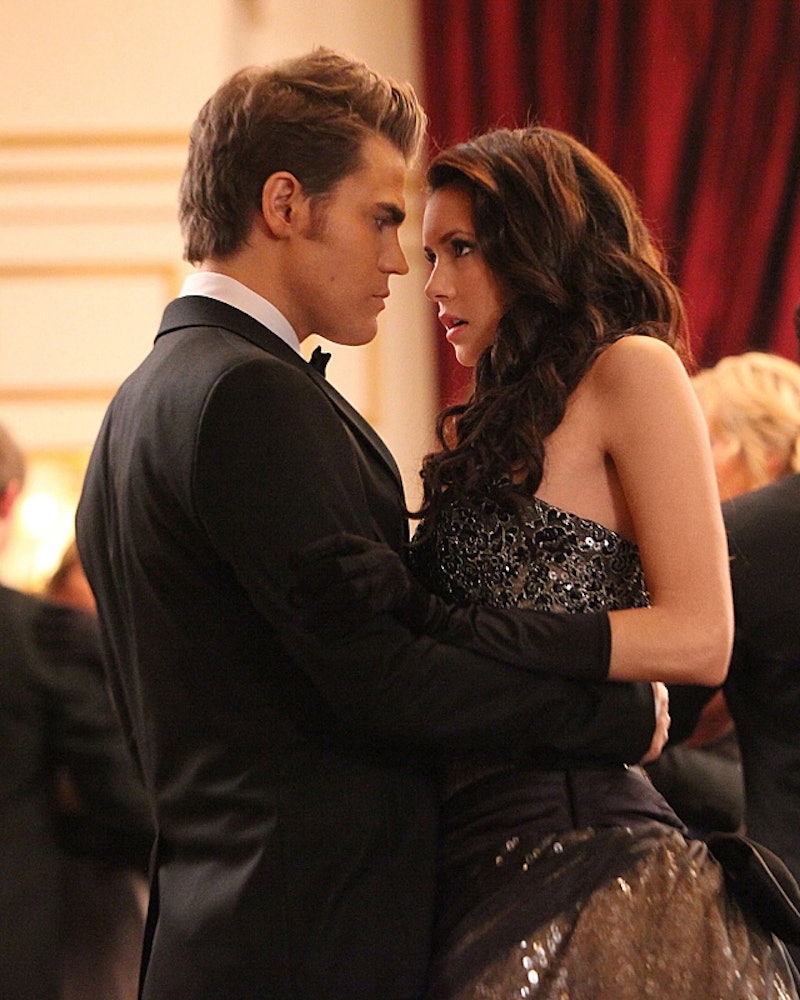 A lot has happened since the day The Vampire Diaries first premiered. Elena and Caroline are now vampires; Damon is quite literally in-between worlds; Tyler became a werewolf, then hybrid, then a regular human again; Jeremy got seriously ripped. But the biggest element that differentiates TVD Season 6 from Season 1 is the fact that Stefan and Elena are no longer TVD's central love story. Not that I’m complaining, of course. I'll admit that I was an immediate Delena ‘shipper right from the start. However, this shift in romantic entanglements has been a major upset for many dedicated Stelena supporters. And I totally get it.

They were the original core couple, which makes severing that particular tie all the more difficult. But as my unanswered love letters to Benedict Cumberbatch have proven, just because you want something bad enough, doesn’t mean it’s going to happen. And unfortunately, Stefan and Elena’s relationship falls under that category.

In the words of good ole Taylor Swift, these two are never ever everrrr getting back together. It’s just not going to happen. Not now, and not ever. But before you start looking up ways to compel me off a cliff, just take a second to hear me out. Because when you stop and think about it, they really don’t belong together anymore. And here’s why:

Vampire Elena Is Here To Stay

One of the major side effects of Elena becoming a vampire was the revelation that she now felt more connected to Damon rather than Stefan. Even after that whole sire bond insanity, Vampire Elena wanted to be with Damon and flat out chose him over Stefan. And I don’t see that changing anytime soon. There was a slight glimmer of hope for Stelena back when the cure was still a possibility. (Logically, if Human Elena returned, so would her feelings for Stefan.) But now that Elena’s immortality feels like a permanent fixture rather than a temporary drawback, a Stelena romance is looking that much bleaker.

Stefan Is Way Too Depressed

Based on recent TVD Season 6 spoilers, Stefan is going to be taking Damon's death extremely hard. So much so that it could end up seriously damaging his friendship with Caroline — a tough blow for all Steroline 'shippers. And his relationship with Elena doesn't seem much better. In fact, he comes across as downright cold to her in the Season 6 trailer, where he basically tells her to get over Damon's death already. (Like he's one to talk.) Oh yeah, and he even appears to have a new love interest, though it's unclear if she's just a random hook-up or something more. Bottom line — Stefan is in no way mentally or emotionally prepared to even think about getting back together with his ex. He's just got too many other issues to deal with without adding to the pile.

There Are Too Many Other ‘Shipping Pairs to Compete With

You know it's true. Having now been on the air for going on six seasons, there have been a ton of new relationships that have developed. Delena and Steroline 'ships have a serious following, making it all the more difficult for the writers to try and backtrack to a Stefan and Elena romance. Simply too much has happened. And given the vibe of their current relationship — which only just reached a comfortable friendship level last season — it frankly wouldn't make sense. Elena has made it clear that her heart belongs to Damon, so allowing her to jump back to the other brother would make what she had with Damon feel much less meaningful. Can you imagine the Delena uprising that would create? We're talking a Code Red situation of epic proportions, which I doubt the writers (or the world) would want to deal with.

But just because the Stelena chapter of this story is probably dunzo, it doesn't take away from the fact that they had a great run.