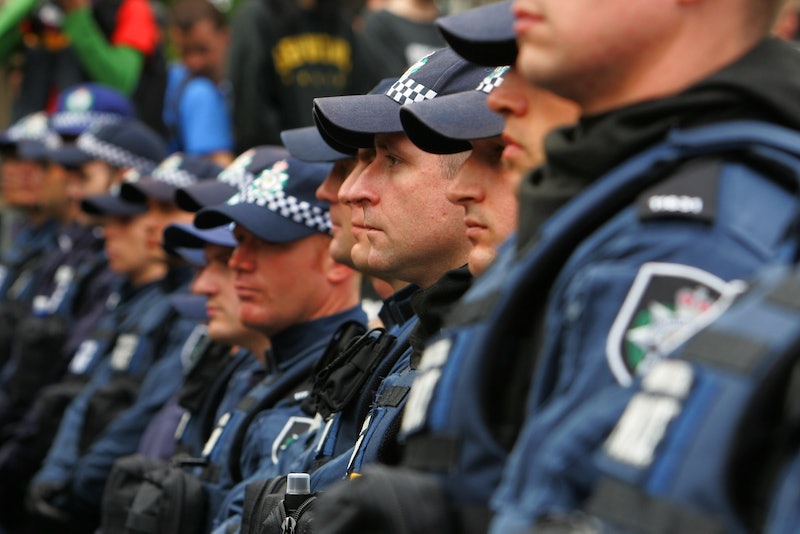 It was a close call for the land down under under, but mass police raids in Australia stopped an ISIS beheading plot this week. The raids were the biggest the country has ever seen, involving hundreds of police officers, both federal and state — but it was well worth it. Locals in Australia were being pushed by the extremist militant group to carry out — and film — public executions, as per the horrifying ISIS MO. Now, the country's terror alert threat is at the second highest level it can be.

Australia is one of the places where the ISIS threat has been most insidious. Roughly 100 of its citizens are believed to be working for Middle Eastern extremist groups; over half are thought to be fighting for ISIS in particular. Fifteen Australians have been killed thus far, fighting for the militants' cause. This week — just after Prime Minister Tony Abbott pledged his support for the global coalition and outlined his plans to send in warplanes and soldiers to Iraq — the country raised its terror alert to "high." That's the second-highest level Australia has, and it's the first time it's ever been used.

And it seems it wasn't too off-base. On Thursday, nearly 900 police officers raided over a dozen buildings across Sydney and Brisbane, in response to a single phone call. Already, some information had been gathered back in May regarding ISIS' chilling plan: kidnap locals, execute them on film, and then send the tapes back to the terrorist group's "media unit", who would then make the videos public. Some reports have added that the people killed would be covered in an ISIS flag. But the call apparently made it clear the plan was going to be enacted, and soon.

Thankfully, the plot was foiled, but, according to Federal Attorney-General George Brandis, "if the ... police had not acted today, there is a likelihood that this would have happened." Fifteen people were detained in the raids, and according to Reuters, at least one of them was charged with conspiracy to carry out a terrorist attack.

As Abbott told the press:

That's the intelligence we received. The exhortations — quite direct exhortations — were coming from an Australian who is apparently quite senior in ISIL to networks of support back in Australia to conduct demonstration killings here in this country.This is not just suspicion, this is intent and that's why the police and security agencies decided to act in the way they have.

The news of course comes only two days after an American was indicted for helping, and recruiting for, ISIS. Last week, a 19-year-old woman from Colorado plead guilty to the charge of providing material support to the terrorist group. Though these are the only two known incidents of Americans being charged with aiding ISIS, the threat of the group's encroachment onto home turf is the stuff of nightmares.

Still, it's comforting to know that if the police do their jobs well — as in the case of Australia — there's nothing to worry about. As New South Wales Police Commissioner Andrew Scipione told the AP:

Right now is a time for calm. We need to let people know that they are safe, and certainly from our perspective, we know that the work this morning will ensure that all of those plans that may have been on foot have been thwarted.