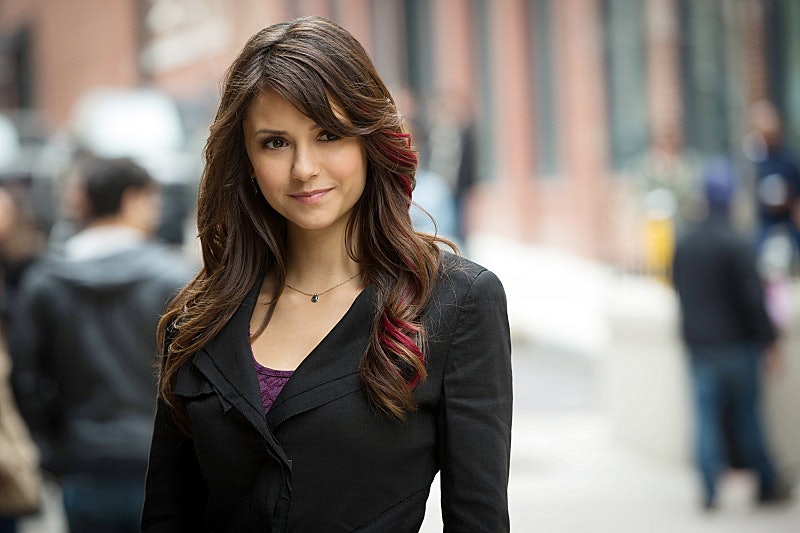 This new theory is incredibly creepy and it's even creepier that I get it. All Vampire Diaries fans already knew that Elena wasn't going be to handling Damon's death well when The Vampire Diaries Season 6 premieres. How could she? He was the love of her life — or so she believed. And when the TVD Season 6 trailer featuring Elena was released, it was clear how bad Elena's actually taking this. She's threatening people, she's killing people, and well, she's kind of acting like Season 1 Damon. Tumblr user and TVD fan, StrongElena, posted a TVD Season 6 theory that Elena's acting like Damon and even dressing like Damon while she deals with her loss. And, considering what fans saw in the Season 6 trailer, that's entirely possible.

Really, when we consider how Elena has behaved during the mourning periods of past deaths on the series, this isn't actually a crazy theory at all. And that should really scare us TVD fans: we're capable of thinking one character pretending to be another who's died is run-of-the-mill behavior. Along with a side-by-side edit of Damon and Elena that shows a striking similarity between what's happened on TVD in the past and what happens in the Season 6 trailer, StrongElena writes:

Elena (Nina Dobrev) looks like a perfect functional young lady working at the Medical Center, what worries her friends and family, after all, she lost the love of her life. But when the night falls Elena spends her time impersonating Damon, wearing his leather jacket and killing people in the middle of random roads.

It's not burning the town and the Salvatore mansion to the ground, but it's one way of "seeing" Elena's dead boyfriend — something Elena is clearly desperate to do in the latest trailer for Season 6:

I guess emulating your dead boyfriend's pre-humanity stage is a great way of thanking him for the relationship and love he showed you in life. I mean, no one ever said Elena was a rational being. In fact, this feels exactly like something Elena would do now that we've connected it to the fact that she's carrying his picture around and sniffing his clothes four months after his death. She might be studying pre-med in college and trying to set Caroline up on dates, but she's far from being entirely sane. Like this Tumblr fan said, by day she's normal, but by night Elena is something entirely unlike herself.

Even in Elena's darkest moments following Jeremy's death and the deaths of just about every person she ever called family, we never saw her come this unhinged. She shut off her humanity for a little while, but not even then was she actually ripping open the throats of innocent people on the side of the road. But Damon is something different — from the moment she became a vampire, TVD questioned whether or not Elena was tethered to Damon by a supernatural, all-consuming force (aka the Sire Bond). And, even though everyone denied it, maybe it's really is true.

For a person who's dealt with death tenfold over the past five seasons of TVD — including her "first love" Stefan's death in Season 5 — she could be handling Damon's death much better. This makes it totally batshit crazy for Elena to be putting on Damon's leather jacket and copy-catting his earlier work in Mystic Falls. It's just bizarre and reckless and seemingly beyond her control, considering she's dealt with the painful flood of emotions that follows turning your humanity switch back on after having it off.

There might have been something truly life-altering between her and Damon all along, which would explain this behavior. Or maybe she's just completely lost her mind. But, it does seem entirely likely, at least from the parallels in the Season 6 trailer, that this Tumblr fan is totally right about Elena's nighttime activities. And I feel for Caroline who will ultimately have to pick up the pieces.