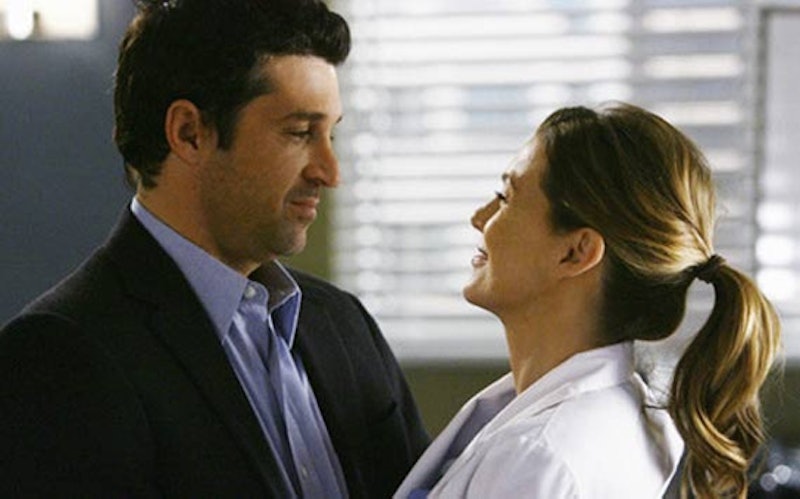 From the time of their romance's initial conception, Grey's Anatomy couple Meredith Grey and Derek Shepherd have never been what I'd consider relationship role models. I mean, how many times have they broken up since their first hookup in the pilot? Answer: A lot. More than I care to count. But what I do love about them is that despite the obstacles they faced, they ultimately overcame them... even if it took a McDreamhouse made of candles to make it happen. But that was far from a victory march for Meredith and Derek. Since then, they've dealt with more crisis and tragedy than would ever happen in any hospital that wasn't fictional. Now, it seems like the impossible is about to happen. Their relationship might actually be coming to an end.

Before Cristina made her big exit at the end of Season 10 — something I'm still not over, by the way — she spoke some very important parting words to her person: "He is very dreamy, but he is not the sun. You are." And Cristina, in all of her infinite wisdom, was right. Even though Derek thinks that Meredith should uproot her life and leave her career, best friends, and everything else's she's ever known in favor of his new job in D.C., it doesn't mean he's right. Mer deserves the chance to make some serious medical breakthroughs too.

And thus, we are at an impasse. Given the recently released Season 11 promo, it isn't looking for good for Meredith and Derek. If I wasn't so optimistic, I'd definitely think they were headed for a divorce. But as a torch carrying member of the MerDer Shippers Club, I refuse to give up. They're staying together, and this is why.

Usually, I'd be the first to tell you not to trust a single word Grey's showrunner Shonda Rhimes says, but in this case, I think we can believe her. In an interview with Entertainment Weekly in August, Rhimes said that she doesn't think the debate of Meredith staying or going is "a marriage-ending argument." If the woman who is, you know, in charge of what happens basically says that a divorce is not going to happen, it should be pretty safe to believe her.

Of course, she could just be trying to throw us off, but if she is, I will never forgive her.

They've been through way worse

Ex-wives showing up unannounced, hospital shootings, miscarriages, the deaths of, like, half the people they know, plane crashes, a difficult adoption process... Meredith and Derek have had to face more than your average couple in terms of stressful situations, and they've come out stronger than ever each time. What's a little distance when they've already overcome all of that? Piece of cake.

Ellen Pompeo & Patrick Dempsey both signed on for Season 12

Let's talk reality for a second. If Rhimes was planning to split Meredith and Derek up, one half of the equation could've decided not to sign on for another year... and if that had happened, I'd be saying that a divorce was imminent. But being that they're both on deck for another season, things look pretty good for the future of their relationship. I mean, yeah, they could both stick around and live their lives separately, but I'm staying optimistic.

Meredith and Derek are obvs meant to be

Because how could they possibly decide to go back on vows that were made on a Post It? MerDer for life.