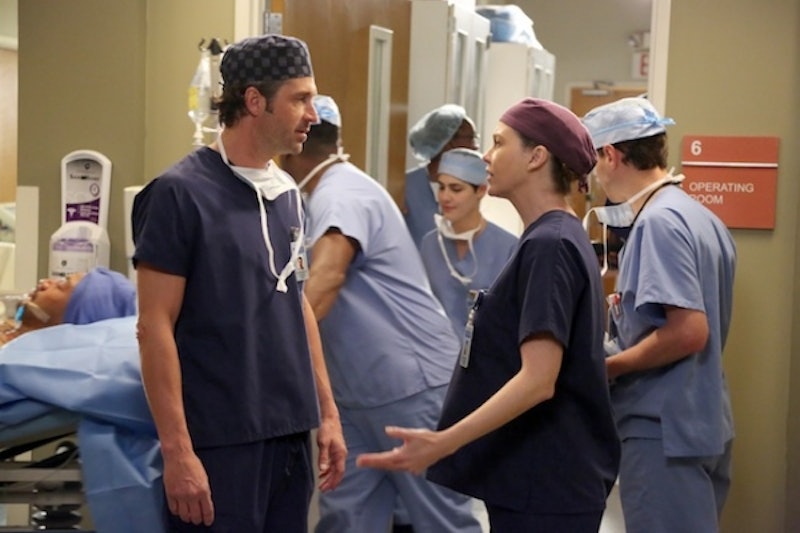 When you're Meredith Grey, life is never easy. Either you're mourning your dead loved ones, losing your best friend to Zurich, or discovering you have siblings you never knew about, and that's what happens on the days you aren't trying to survive after a plane crash/ferry boat accident/mass shooting. You'd think after 10 seasons, the troubles would lessen, but in fact, they've only gotten worse; in May, viewers watched Meredith brutally fight with her husband over moving away from Seattle, and judging from a new Grey's promo for season 11, the battle's just getting started.

The clip, released Thursday night, opens with a scene from last season's finale, in which Meredith and Derek argued over whether or not to move to D.C. As Grey's fans will recall, Derek had been offered a major job opportunity there that he was desperate to take, but Meredith refused to make the move when their children, jobs, and social lives were settled in Seattle. The couple hadn't resolved the fight by episode's end, and as the promo shows, it doesn't look like they've managed to come to a conclusion by the show's September premiere.

Even more unsettling? It looks like Meredith's taking comfort in Alex during her marriage crisis, if the hug she's giving him in the clip is any indication. "I just don't know if my marriage can survive this," she tells him, and if the confession and hug are telling of a larger intimacy between the two, then fans can certainly get where she's coming from.

Of course, it's unlikely Meredith and Alex are starting an actual affair of any kind; the deep, evolving friendship between the two has been one of Grey's greatest storylines, and it's hard to imagine that ever changing. Still, in August, Shonda Rhimes revealed that Mer and Alex definitely grow closer this season, saying that “Jo is going to be horrified to discover how much time Alex is going to be spending with Meredith," and that Meredith is going to treat Alex as a replacement "person" while Cristina's out of the picture. So although a romance between the friends may be doubtful (although you never know...), their newfound closeness will certainly have some repercussions.

The clip also shows a brief scene between newlyweds (and newly pregnant) April and Jackson, where the mom-to-be tells her husband, "he's dying inside." Who she's referring to — Derek? A patient? A family member? — is unknown, but judging from their somber expressions, the answer can't be anything good.

So, Grey's fans, do as the trailer advises and "hold onto your hearts." Sept 25. is just three weeks away, and judging from this promo, it's not going to be an easy ride for Meredith, Derek, or any of us longtime fans who've spent the last 11 years at Seattle Grace/Mercy West/Sloan-Grey Memorial.

You can watch the promo below:

More like this
Shonda Rhimes Responded To The Surprise Exit Of A Day 1 'Grey's Anatomy' Figure
By Grace Wehniainen
Madonna Already Added 14 Dates Her Greatest Hits Tour Due To High Demand For Tickets
By Jake Viswanath
You Might Want To Rewatch This Key 'On My Block' Scene To Understand 'Freeridge'
By Grace Wehniainen
The 'Freeridge' Cast Shared Their Hopes For A Potential Season 2
By Grace Wehniainen
Get Even More From Bustle — Sign Up For The Newsletter
From hair trends to relationship advice, our daily newsletter has everything you need to sound like a person who’s on TikTok, even if you aren’t.