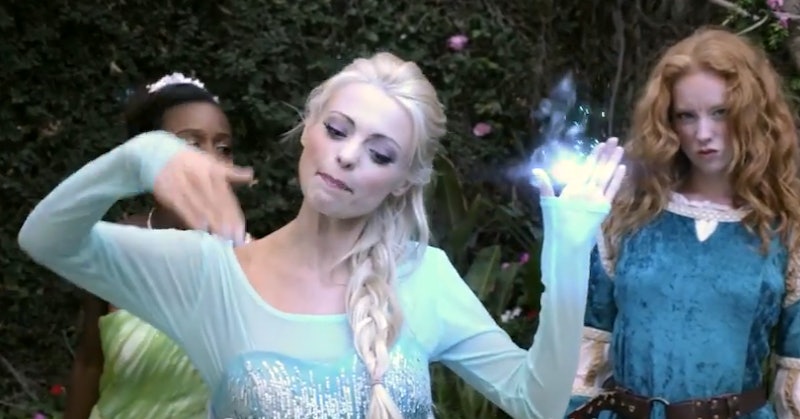 At this point in our culture's history I feel like I've earned the right to roll my eyes at a Disney princess rap battle. I love me some Disney princesses, there's no denying, but at this juncture a Snow White/Queen Elsa rap battle just felt inevitable, you know? I'm frankly surprised this didn't happen last winter.

Is it completely in line with the current environment of our pop culture that this now exists? Yes. Should we maybe examine that culture's habits of falling all over white ladies rapping automatically, with everyone from Taylor Swift, to Anne Hathaway, to Anna Kendrick, to Iggy Azalea? Probably. I don't tend to have a problem with those ladies rapping — some rock at it, some less so — but it can get kinda weird when the entire premise is to put them into a space viewed as cognitively dissonant: Adorable white ladies and rap music. Add in the automatic twee undertones of the Disney princess milieu, and that thrusts this video by Whitney Avalon into some interesting light that I'm sure someone at some point will write a liberal arts thesis about.

Still, dynamics of this video are fascinating to me in more ways than those: This has got some good back-and-forth between the two princesses, but it's Frozen's Elsa who undoubtedly takes home the win. "Who needs a man to save and kiss ya?" I'm not one for idolizing Frozen's feminism-lite, but you've gotta admit Elsa's light-years more advanced when compared with Snow.